Joe Biden comes to Ottawa, and it feels oddly familiar 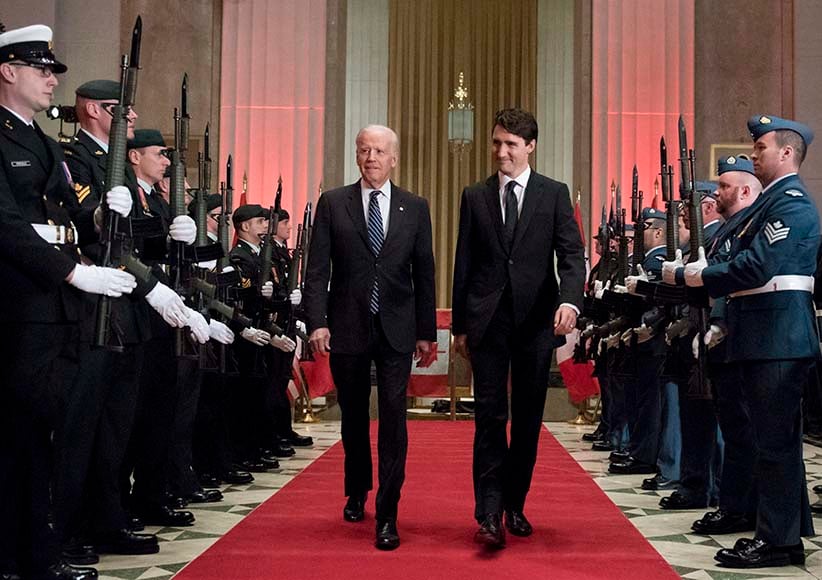 While we waited for U.S. Vice-President Joe Biden to arrive for dinner last night at the Sir John A. Macdonald building, a handsomely repurposed beaux-arts bank just off Parliament Hill, a particular mix of expectation and amusement filled the air. I felt sure I’d breathed it in before.

But what was it? Definitely something about the blend of pop culture fun and political culture lore that surrounds this U.S. vice president. Biden makes everybody feel good. He’s famously hard to script. His smile is visible through heavy snow at night. He’s 74 and exudes unvanquished pleasure in the politician’s craft and calling.

And then I saw Jean Chrétien in the crowd and it hit me. This was how it often felt during, let’s say, the second half of Chrétien’s run as prime minister. Still does today when he gets up in front of a crowd. He enters a room and folks are delighted to hear that rasp. Glad he’s still himself, hasn’t gone away.

When he was in power, Canadians laughed easily about Chrétien, and 22 Minutes had a field day with him. Just like Americans laughed about Biden, who furnished pure Saturday Night Live gold. But, in both cases, it was relaxed laughter, not the worried kind. Because, hey, even if these guys sometimes sounded a bit foolish, they weren’t fooling around with public office. They were old pros.

Making too much of these coming-of-age parallels, I know, is contrived. Just one detail more, though: Biden’s childhood was marked by his struggle to overcome a bad stutter, while speech was made difficult for Chrétien by a childhood bout of Bell’s palsy that partly paralyzed one side of his face.

So they didn’t come up easy or glib. Yet they arrived awfully young on their respective national political stages. Biden went on to serve for 36 years in the U.S. Senate, chairing during two long stints its powerful judiciary committee and its foreign affairs committee. Chrétien sat in the cabinets of Lester Pearson and Pierre Trudeau from the early ’60s to the mid-’80s, holding prestige portfolios like Justice and Finance.

They were surely, by any objective measure, high-ranking, longstanding members of the political elite. But it didn’t land that way. They weren’t smooth talkers, sometimes with memorable results. Biden: “Folks, I can tell you I’ve known eight presidents, three of them intimately.” Chretien: “A proof is a proof, and when you have a good proof, it’s because it’s proven.”

That everyman quality must be baked on hard for decades of wielding serious power not to wear it off.

There was also always the possibility of a flash of anger, an expression of a tough-guy streak, just the folksy side of thuggish. Biden saying, during the recent election campaign, that he’d like to take Trump “behind the gym.” Chrétien applying the “Shawinigan handshake” to that unfortunate protester who got in his way.

What Biden represents, however, should not be trivialized. There’s a tendency to be cautious that comes with, first, not being the aristocratic type, and, second, sticking around long enough to see sure things go sideways. Chrétien opted out of the 2003 invasion of Iraq; Biden was, in the Obama administration, reluctant about using military force, certainly compared with Hillary Clinton.

Their parties’ establishments readily embraced neither of them. But don’t Democrats wish they’d put up Biden, instead of Clinton, against Trump? Just like a lot of Liberals realized, as they languished in the opposition wilderness in the 1980s, that they should have gone with Chrétien, instead of John Turner, against Brian Mulroney.

None of this matters, except as a little game of finding patterns, unless you think Biden carried something more meaningful than his own cool persona into that glittery dinner in Ottawa last night. I think he stands for the way a career politician, one who doesn’t lose touch with how most voters talk and think, needn’t end up being remote, much less reviled.

People are often said not to like career politicians, even hate them, but that’s not really true. The crude right-wing populists on the rise today are wrong about that. Mostly voters end up liking politicians who can be seen to like politics, and people, and platforms, and power, and don’t pretend otherwise. This attribute isn’t diminished by decades in office, it’s burnished by time.

Experience amplifies the meaning of words that might otherwise seem unexceptional. “I’ve never seen Europe as engaged in as much self-doubt as they are now,” Biden, who’s had an insider’s view of European politics for so long, said last night. And, bringing it closer to home: “There is a lot of soul searching going on in Europe, and you saw some of it in my country.”

Hardly indelible words. Coming from a guy who’s seen it all, though, worth mulling. He also addressed some sentimental remarks to Prime Minister Justin Trudeau, including some about how it’s even better to have granddaughters than it was to have daughters. Stick around, kid, he seemed to being saying, the long game is what it’s all about.