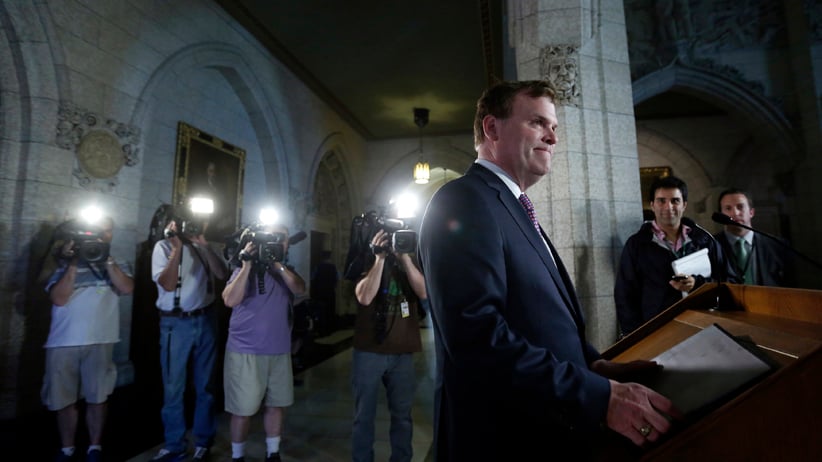 OTTAWA – John Baird made it official this morning, telling a hushed House of Commons that he is stepping down as Stephen Harper’s foreign affairs minister and leaving federal politics.

Baird, grinning broadly to a standing ovation from around the Commons, said he is optimistic about the future of the country and boasted about Canada’s standing on the world stage.

But he said it was time to quit after two decades in elected politics, that he would soon be leaving his MP’s post in an Ottawa riding, and that he would not run in a federal election later this year.

Nick Taylor-Vaisey: A man for all questions

John Geddes: Baird shouted a lot, but had a subtler side, too

Baird also appeared to confirm the suddenness of his departure, which broke like an earthquake in the frozen capital on Monday evening.

“Mr. Speaker, last night I spoke to the prime minister and informed him I was standing down from cabinet,” Baird told the packed chamber, with Harper seated just to his left.

In a press release, Harper said he accepted Baird’s resignation “with great regret and affection.”

“John has always been willing to do a lot of the heavy lifting in my various cabinets and has assumed daunting new responsibilities with unsurpassed energy, commitment and professionalism, never losing sight of the fact that he was serving the Canadian people,” said Harper’s statement.

Baird, known as a pugnacious debater with sharp partisan elbows and a close confidant of the prime minister, acknowledged his reputation and said he’s learned a great deal since entering electoral politics in Ontario in the mid-90s as a twenty-something flame thrower.

A parade of cabinet ministers, Conservative backbenchers and opposition MPs came and shook Baird’s hand or hugged the popular minister after his address, bringing Commons business to a stand-still for 15 minutes.

There is widespread speculation that the Ottawa politician is headed to a career in the private sector, however Baird, 45, did not clear up his future intentions in his address to Parliament.

“I am optimistic about the opportunities that lie before me,” was all Baird told the House.

“He found his best footing as minister of foreign affairs, in my opinion,” said Dewar.

Marc Garneau, the Liberal critic, expressed the common feeling of surprise at Baird’s departure from politics.

“If there is one person in this chamber whose passion never seems to have abated one second, who always had fire in his eyes and still has fire in his eyes, it is surely John Baird,” said Garneau.

“I’m still trying to understand why you are leaving,” Garneau added in a direct address across the aisle.

Baird was recently asked by the head of a new international commission to help him reform the United Nations World Health Organization because it responded too slowly to the Ebola crisis.