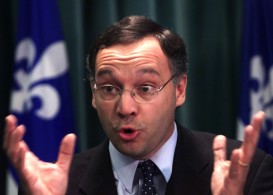 “Never would I have thought that Quebec sovereignty would become the subject of a quarrel….initiated from Ottawa,” Joseph Facal wrote yesterday on his Journal de Montréal blog. I let it slide because I’m out promoting a new book and because the former Parti Québécois cabinet minister is a lovely guy. But he was peddling the same crap again this morning on the radio, and at some point folks have to remember they live in a province where “Je me souviens” is written on the license plates, and act like it.

First, recall the news that has Facal struggling to collect his wisps of memory. Last week the federal government submitted legal arguments in a longstanding challenge to Law 99, a 2000 Quebec law that says (and here I paraphrase) Quebec can do whatever it wants and the rest of the country just has to stand there and watch, nyah nyah nyah. This news, revealed here at Inkless, caused an outpouring of consternation in Quebec City, featuring a weekend news conference by the current intergovernmental affairs minister, J. R. Whosis, and a rare unanimous resolution of protest by the National Assembly, which they can throw onto the pile.

Facal goes on to mention that he was the minister responsible for Law 99, and to say the Harper government was “absolutely not obliged” to take part in this court case, which has, he said this morning on Radio-Canada, “been dragging on for years.” “What got into the Conservatives?” he writes.

Facal of all people should know that the strategy pursued by Quebec government lawyers for a dozen years has always been to ensure that the court challenge to Law 99 “drags on,” precisely because the law cannot survive an argument on its legal merits. And Facal of all people should know federal Justice Department lawyers served notice of their interest in Law 99 almost from the outset. At no point in more than a decade have federal government lawyers indicated any change to that position.

To be sure,  at first the battle-weary Chrétien Liberals seemed reluctant to get involved. Here’s what I wrote in a Page 1 National Post story on Dec. 8, 2000:

During final debate on the bill, Lucien Bouchard, Quebec’s Premier, called it “more than simple law; it is more like a charter of political rights for the people of Quebec.”

But Jean Charest, the Opposition Liberal leader, pleaded with the government to abandon its proposed law. It will certainly be struck down in courts, Mr. Charest said, thus weakening the province’s political hand rather than strengthening it. “We will not subscribe, Mr. Speaker, to any act that risks weakening Quebec,” he said.

The court challenge Mr. Charest warned about is ready to be filed by the Equality Party, which fields candidates in every provincial election but has not succeeded in getting any elected since 1989….

A federal source, speaking on condition of anonymity, said yesterday the chances of immediate federal intervention are close to zero. As with earlier court challenges to the separatists launched by private citizens, such as that of lawyer Guy Bertrand in 1995, Ottawa is “watching closely,” but will not immediately get involved, the source said.

If the federal government refuses to intervene, Mr. Henderson will send his lawyers to court to have the law declared unconstitutional.

“Unless the federal government grows a spine, it’s going to be up to citizens to litigate,” Brent Tyler, a lawyer for Equality, said in a telephone interview.

He said his case will be filed within days. But because private citizens can only launch cases in lower courts, it could take years to work its way up the ladder of appeals unless Ottawa steps in to take the question directly to the Supreme Court, Mr. Tyler said.

“We’re saying, ‘Look, why not short-circuit this process?’ We’re more than happy to do it if the feds are going to be derelict in their duty, but somebody has to do it.”

Five months later, the feds seemed to be changing their attitude. “Federal officials are understood to be following this court challenge closely and might intervene later, depending on the strategy Quebec government lawyers use to defend Bill 99,” I wrote in an article published on May 11, 2001.

Fast forward to August 28, 2001, when I recounted the previous day’s action in Quebec Superior Court. In the case’s first legal arguments, the Quebec government lawyers were working frantically to low-bridge a law Lucien Bouchard had called “a charter of political rights for the people of Quebec:”

In their first formal rebuttal, Quebec government lawyers asked the judge to toss the case out. To simplify, the lawyers argued that the Equality party is a bunch of nobodies; that Equality has made too-similar arguments in other court cases; and that even though they’re life-long Quebecers, the litigants have “no direct interest” in a law that purports to enumerate the “fundamental rights of the Quebecois people.”

Then they dropped the whopper. “The questions raised by this request are not justiciable” — that is, they are beyond the jurisdiction of any court. The government claims Mr. Tyler and his clients have no right to be asking the court to rule on “political aspects of … the Quebecois people’s fundamental right of democratic expression.”

This is rich. The PQ writes down all its most cherished beliefs in a bill, passes it into law, and then when citizens protest before the only appropriate forum — a court of law — their government asserts that the law is not a law but merely a harmless list of “political aspects.” Then it simply urges the court to move along, like a gawker at an accident scene.

“Courts … must show appropriate restraint and abstain from pronouncing on questions that do not lend themselves to judicial examination.” A perfectly circular argument: courts shouldn’t look at what they shouldn’t look at.

One other important development at that day’s hearing: “Mr. Tyler and his Quebec government opponents weren’t the only lawyers present. The federal government sent a lawyer too. He didn’t say much, but his presence suggests Ottawa is keeping a wary eye on all of this.”

The feds are inching off the sidelines. They have kept a lawyer present all along, strictly to reserve the right to intervene later if it becomes necessary. But last week, two of Ottawa’s top lawyers, René LeBlanc and Warren Newman, argued forcefully that the court must not reject the Equality challenge. And several times Mr. Newman went beyond an argument on this narrow point of “justiciability” and attacked the tenets of Bill 99 itself.

All of this is being followed very, very closely in Stephane Dion’s office. I said to one of my federal sources yesterday: “You guys are acting like you want to play on this file.” I was told, “Yeah, we are.”

We are headed toward direct involvement by Canada’s government in a challenge to a law that forms the centrepiece of sovereigntist doctrine in Quebec.

Why get involved? Allan Rock laid out the Chrétien government’s reasoning on these general questions of legality in May, 1996, more than 17 years ago:

“Primarily, the question under consideration is the position taken by the government of Quebec that the Canadian constitution and courts are absolutely without a role in the question of a declaration of sovereignty,” Rock told reporters later.

“That’s an extraordinary position, and we’re currently studying the implications of that position.”…

Federal officials are clearly aware that if they don’t intervene, sovereignists could interpret that silence as agreement with Quebec’s position.

“One of our concerns is (what might happen if Ottawa leaves) that position unanswered – at least by the federal government, before the court — and what might ensue,” Rock said.

That philosophy led Rock to send Justice Department lawyers to intervene in the case at hand, the so-called “Bertrand case;” then to launch a Supreme Court reference on secession. The same government then introduced the Clarity Bill, which Preston Manning’s Reform Party supported. The federal government never pulled its lawyers from the Law 99 case at any point — not when Paul Martin was prime minister, not when Stephen Harper had a minority, not after he won his majority. Those lawyers have not had to make arguments on the substance of Law 99 because countless generations of Quebec government lawyers were born, grew old, died and entered the halls of legend  as they all did the same thing: ran like barnyard chickens away from any possibility of an actual court argument on the merits of Law 99 as, you know, law.

They lost. The argument they fought for a decade to avoid is now at hand. Federal lawyers — indeed, the very same federal lawyers — who said in March of 2002 that they would fight this law if they could are now fighting it. You could look it up.