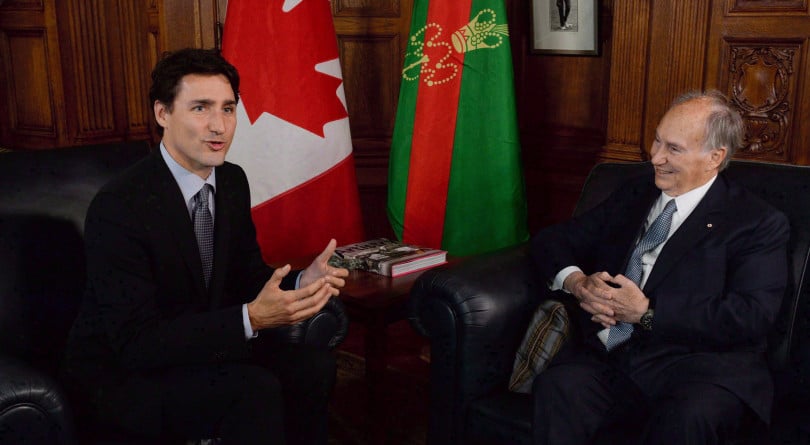 Prime Minister Justin Trudeau meets with the Aga Khan on Parliament Hill in Ottawa on Tuesday, May 17, 2016. (Sean Kilpatrick/CP)

For a change, the polls were right. Alberta voters delivered a decisive majority to UCP leader Jason Kenney, bringing an end to the province’s brief dalliance with Rachel Notley’s NDP.  As of last night the UCP held 63 seats to the NDP’s 24. Even with close to 700,000 advanced ballots still waiting to be counted, Kenney’s place as Alberta’s 18th premier.

Alberta unbound: So what did Albertans just order up for themselves? Vengeance, writes Jason Markusoff:

Jason Kenney just completed a three-year series of gruelling slugfests to reach this point. He seized the crown of the once-mighty Alberta Progressive Conservatives, fused them with their old Wildrose Party foes, kamikazed his way to leadership of the new United Conservative Party, rejected several would-be UCP candidates with bigoted or intolerant views (but tolerated a few), and dispatched with the NDP on Tuesday night to claim the premier’s office for himself and his cherished Sir Thomas More portrait.

After all that, what did Kenney win, with his majority UCP government? A chance to fulfil his promises for four more years of endless pugilism in the name of Alberta, and of getting more of its residents back to work.

He’ll fight provinces like B.C. and Quebec, who are unwilling to welcome bitumen pipelines. He’ll fight environmentalists in courts of law and public opinion with an “energy war room.” He’ll fight international banks who don’t want to the reputational harm of financing pipelines or oil sands projects. He’ll fight city councils mulling lawsuits against oil companies to recoup the costs of climate change. And, hold on to your socks, he’ll fight Justin Trudeau and the federal Liberals, who ended Kenney’s cabinet career and set him on his current provincial trajectory.

Are Albertans game for a premier who balls his fists for the next couple of years? You’re damn right they are, after richly rewarding his campaign fuelled on anger, revenge and the expectation all this and some actual government policy will bring back the economic boom times to which Alberta had grown accustomed. (Maclean’s)

Maybe Aga can’t after all: Back in Ottawa, Tuesday was already going to be an uncomfortable day for Trudeau, what with the impending election of yet another bellicose conservative premier dead set on preventing his re-election. Then the Federal Court potentially cast another dark pall over Trudeau ahead of this fall’s vote—a judge has ordered the lobbying commissioner to take a second look at whether the Aga Khan violated the rules by treating Trudeau and his family to a vacation on his private island in the Bahamas. In 2017 the former commissioner, Karen Shepherd, dismissed the matter, arguing that even though the Aga Khan sits on the board of a foundation that lobbies the federal government, the fact he didn’t get paid for that position meant he wasn’t a lobbyist. The judge quashed that decision, calling it “unreasonable,” and sent the matter back to current commissioner Nancy Bélanger to be reexamined. First, though, her office is waiting to see if new Attorney General David Lametti will appeal the ruling. (CBC News)

Free the emails: Sticking with the theme of inconvenient court cases dangling over the Prime Minister, lawyers representing Vice-Admiral Mark Norman in his breach of trust case are in court this week fighting for the release of 29 memos, reports and emails involving the Prime Minister’s Office and the Privy Council Office. Norman’s lawyers argue the charges, related to a $670-million shipbuilding deal, are politically motivated and that the documents could reveal evidence of political interference by Trudeau’s advisers. (National Post)

Ford v. Trudeau, Day 2: A day after a panel of judges grilled lawyers for Ontario in that province’s court challenge against the federal carbon tax, it was Ottawa’s turn to face tough questions from the bench, like “Why don’t you just leave them alone?” That was Ontario Court of Appeal Justice James MacPherson‘s question to one federal lawyer, after noting Ontario had reduced its greenhouse gas emissions by 22 per cent since 2005, thanks to a decision by previous Liberal governments to close coal-fired generating plants. Said MacPherson: “We don’t care how they achieved it.” (National Observer)