Politics Insider for July 22: Rideau Hall employees complain of harassment at work, a defence of WE Charity and this is how Washington really works 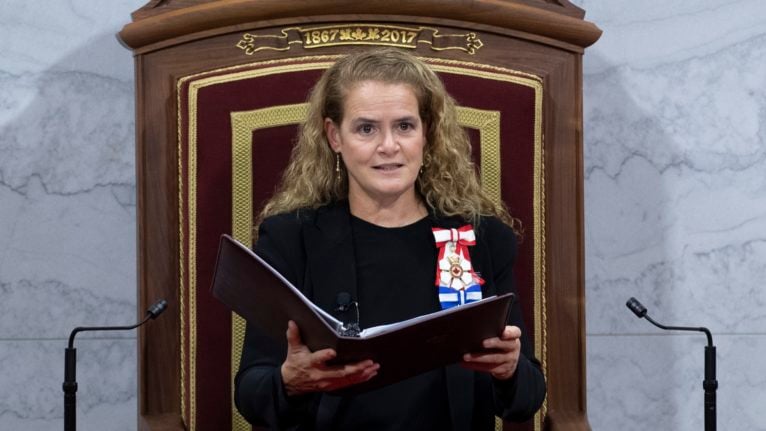 Governor General Julie Payette delivers the Throne Speech in the Senate chamber, Thursday December 5, 2019 in Ottawa. The COVID-19 pandemic has put the kibosh on the annual Canada Day celebration of recipients of the country's second highest award. Governor General Julie Payette would normally announce the list of Order of Canada nominees on July 1. THE CANADIAN PRESS/Sean Kilpatrick

Governor General Julie Payette has once again found herself on the wrong side of workplace harassment allegations. CBC News spoke to several sources at Rideau Hall and across the federal public service who gave voice—anonymously, fearing retribution—to serious complaints that have spanned Payette’s tenure. Maclean’s reported last year, and again earlier this year, on persistently high reports of harassment in annual employee surveys. And Marie-Danielle Smith, now with Maclean’s but then with the National Post, reported on the vice-regal turbulence. The official word from the GG’s office: “We deeply regret this reporting, which is in stark contrast to the reality of working” at Rideau Hall.

Ian Shugart, the head of Canada’s public service, was the latest Important Government Person to weigh in on the WE affair. Shugart at first appeared to pour cold water on any whiff of scandal re: Justin Trudeau’s lack of recusal at the cabinet table. “I do not see a way that the Prime Minister or the finance minister responsible for public funds could not have had involvement in the policy development and in the approval of finances on this scale,” said the clerk of the Privy Council. But he added he wasn’t making any judgment on whether or not Trudeau should have recused himself. Ishat Reza, a lawyer who’s familiar with the federal sausage-making process, offers a useful recounting of Shugart’s testimony.

Today, a newly amended agenda for the Commons finance committee lists Bill Morneau as a witness. He’ll appear after Jesse Brown, the head of Canadaland whose reporting on WE opened this can of worms in the first place.

In defence of WE: Scott Gilmore is no fan of the Kielburgers’ style. He ran a charity that worked to fight poverty in underprivileged parts of the world, and he disagrees with their approach. Gilmore believes that jobs are the best way to lift people up. The Kielburgers, he writes, “believe providing social services in villages, organizing voluntourism to Africa, and hosting student rallies in Canada is a more powerful tool.” But any Canadian who wants to tear down the WE empire should think again, Gilmore writes in Maclean’s:

Even the most jaded and cynical among us should admire them for trying so passionately to do good, and for dedicating their lives towards that goal. They are not being accused of doing anything even remotely illegal, not even of bending any rules. Their efforts to curry favour with all political parties is sadly necessary, and not a unique tactic. If we really want to put them in the spotlight, it should only be to judge how well they deliver value for money, in their work overseas and in their work at home. Everything else is just a pointless mobbing.

How Washington works: This is the scene. It’s Presidents Day, only a couple of weeks after Donald Trump’s impeachment, and a gaggle of senior Canadian public servants is gathered at the Watergate Hotel. No, that’s not the opening to a made-for-TV movie probably starring Paul Gross as a stoic deputy minister and Gordon Pinsent as the scheming ambassador. In fact, that storied hotel’s bar was simply where some bureaucrats met for drinks the night before a crash course in Beltway politics. Your newsletter correspondent has seen the insider-soaked agendas.

Until a few years ago, the course was conducted mostly within the confines of the Canadian embassy just a short walk away from the U.S. Capitol. But that all changed in 2015, when Maryscott Greenwood, a frequent guest speaker at the event whom everyone calls Scotty, took on a new role as facilitator. The course is officially administered by the CSPS, but Greenwood’s fingerprints are all over it. Greenwood heads up the Canadian American Business Council (CABC), an influential lobby group backed by some of the biggest corporations with cross-border business. She’s no stranger to the federal lobbyist registry.

Back to the drawing board: The Department of Finance asks pollsters a few times a year to take the temperature of Canadians on what really matters. The idea is the exercise in vox populi will help policymakers with their policymaking—and governments with their governing. Environics Research won a $166,378.94 contract to conduct the perfectly normal survey this past winter. The firm submitted the results in March. Now they’re available. The problem? One of the top conclusions was this: “For the most part, the feeling was the economy would continue on its current trajectory.” The deficit was “clearly not a major concern.” Respondents were “generally satisfied with the overall state of the Canadian economy.” Ah, the before times.