The prime minister doubles down on the Conservative party's tough-on-terror strategy. 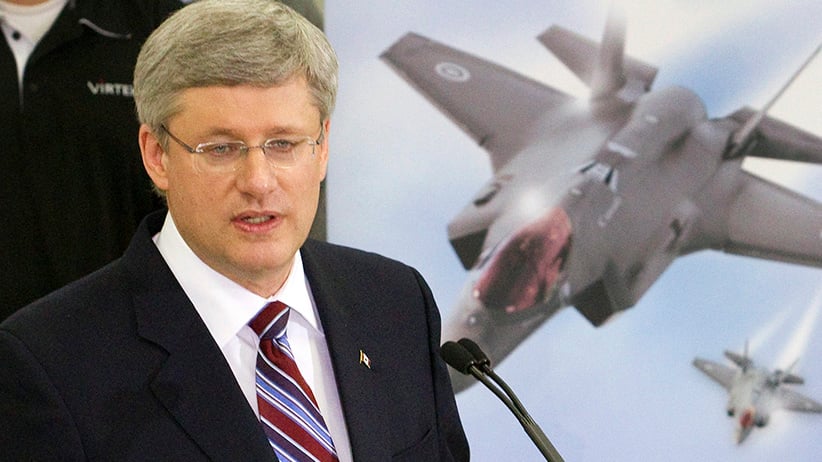 OTTAWA – The Liberals and the NDP would fight insurgents overseas by doing little more than “dropping aid on dead people,” Stephen Harper said Monday as he doubled down on the Conservative party’s tough-on-terror strategy.

With this week’s return of Mike Duffy promising another barrage of banner headlines and awkward campaign-trail questions, Harper struck a defiant tone as he defended putting Canada front and centre in the global fight against militants in Iraq and Syria.

He showed a softer side, promising to take in 10,000 more refugees from both countries over the next four years and to spend $90 million to help protect artifacts and places of worship from the Islamic State of Iraq and the Levant.

But when talk turned to Canada’s aggressive military approach, Harper’s language grew sharp as he described how ISIL was engaged in “mass slaughter at an alarming, lightning pace” when the Conservative government got involved.

“If your policy is humanitarian assistance without military support, all you’re doing is dropping aid on dead people,” he said during a campaign stop in Markham, Ont., describing the position of “diaspora groups” in Canada.

“That’s not acceptable. We’re a country that can contribute militarily and in a humanitarian sense, and we are doing both.”

Harper brushed off the criticisms of NDP Leader Tom Mulcair and Liberal Leader Justin Trudeau, who have rejected military action and called for Canada to stick to providing humanitarian aid.

“ISIS, left to its own devices, will create millions — tens of millions — of refugees and victims on a monthly basis,” Harper said. “That’s why the international community intervened … President Obama and our allies felt we had no choice.”

Harper has been busy making headlines of his own so far this week, perhaps hoping to starve the rebooted Duffy trial of oxygen — star witness Nigel Wright, Harper’s former chief of staff and the man responsible for a controversial $90,000 payment to the disgraced senator, takes the stand Wednesday.

Harper said Monday that a re-elected Conservative government would bring in 10,000 additional religious minority refugees from Syria and Iraq, targeting refugees in the region who face persecution or the threat of extremist violence — a promise meant to woo voters in ethnic communities the Conservatives have long targeted.

And when asked about his eyebrow-raising promise Sunday to impose an outright ban on travel to regions controlled by terror groups, Harper repeated the day’s sound bite of choice, saying such travel is “not a human right.”

Political posturing, Trudeau scoffed during a morning event in Montreal, calling the idea a distraction meant to draw attention away from the Conservatives’ dismal economic record.

“Canada is a country that respects people’s rights,” Trudeau said.

“And any time a government chooses to limit those rights, it has to be able to answer very direct and complete questions about why it’s necessary, about how it will work, about what the clear plan is, and Mr. Harper has done none of that.”

NDP Leader Tom Mulcair began the day in Toronto, attending a book-signing event that had been scheduled long before the election campaign was.

Politics, however, stood up and demanded attention.

Friendly protesters armed with banners stood up and confronted the NDP leader about his position on the Energy East pipeline, demanding to know if he would oppose the project if it proved incompatible with national action on climate change.

“That’s what the whole purpose of coming in with a new system is: to make sure that we take into account climate change whenever we analyze a project.”

The New Democrats were also expected to announce later in the day which of the proposed leaders’ debates Mulcair would be participating in. The party has already said it won’t take part in any debates that don’t include the prime minister.

Harper also made a multimillion-dollar pledge Monday to fund groups that are trying to protect places of worship and religious artifacts targeted by ISIL.

The Conservatives want to spend $9 million over three years on the project through a fund overseen by the Office of Religious Freedom that the Conservatives created in 2013.

Earlier this year, the Conservative government made a similar commitment to resettle 10,000 refugees from the war-torn Middle East, but has steadfastly refused to say how many people have actually been allowed in thus far.

The prime minister said his latest refugee target would give priority to religious minorities threatened with persecution of extremist violence.

“A re-elected Conservative government will continue to champion religious freedom and the protection of religious minorities as a pillar of Canadian foreign policy,” Harper said.