‘Justin, can you imagine?’: Zelensky’s virtual trip to Ottawa

Shannon Proudfoot: The Ukrainian leader and global folk hero addressed Parliament, asking for the world to do the one thing it refuses to do 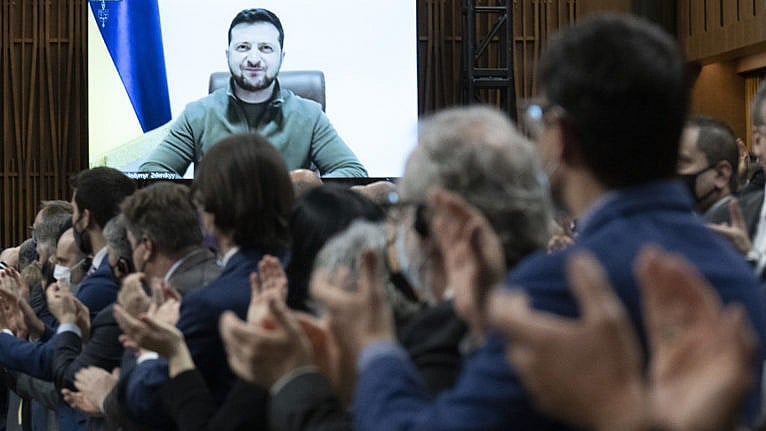 Canadian parliamentarians and guests give Ukrainian President Volodymyr Zelenskyy a standing ovation as he addresses Parliament on March 15, 2022 (Adrian Wyld/CP)

Ukrainian President Volodymyr Zelensky has been the most compelling person on the planet for the last month, standing in the breach alongside his terrorized but indomitable people in the face of a Russian onslaught. The world has watched him grow paler and strained while his facial hair sketched itself into a beard. His spectacular ability to communicate the plight of his country and the ordinary, visceral intimacy of social media and his frequent video addresses have made it impossible to look away.

On Tuesday morning, Zelensky brought that remarkable presence to a jam-packed House of Commons for a historic speech. His message was as simple as it was searing: if we were you, what would you want someone to do?

“I would like you to understand my feelings and the feelings of all Ukraine, as far as it is possible,” he said, in English translation from two large video screens. “Imagine that at 4 a.m. each of you, you start hearing bomb explosions.” He addressed Prime Minister Justin Trudeau directly: “Justin, can you imagine you, your children, hear all these severe explosions?”

What if it were your schools, your bridges, your cities, your historic buildings, he asked. What if someone bombed the CN Tower or laid siege to Vancouver, leaving its residents cut off from the world, without communication, power or even food, as has befallen our Mariupol? He asked Trudeau to picture receiving a memo each day telling him the number of casualties, and to imagine it included the 97 children who have been killed in Ukraine so far.

“Of course I don’t wish this on anyone, but this is our reality in which we live,” Zelensky said. “Every night is a horrible night.”

And then he changed what he was asking all those MPs and the people packed into the public gallery—so many of them wearing blue and yellow or traditional Ukrainian garb—to imagine. What if you called a friendly fellow nation for help in this situation, begging them to close your airspace to stop the bombing, and what if they responded with equivocation?

“They in return express their deep concerns about the situation,” Zelensky said. “When we talk to our partners…they say ‘Please hold on, hold on a little longer.'”

Canada—home to a 1.4 million-person Ukrainian diaspora, the second-largest in the world after Russia—has been a “steadfast” friend to his country and offered military and humanitarian help the moment it was requested, Zelensky said, but even the severe sanctions levelled against Russia haven’t stopped the attacks.

“Basically what I am trying to say is you all need to do more,” he said. “We are not asking for much, we are asking for justice, for real support.”

The emotional tension in the House on Tuesday mirrors what is happening in the world at large right now.

Zelensky and his people have become global folk heroes, their courage and verve inspiring a tidal wave of empathy and solidarity. But while that collective feeling toward them is no doubt genuine, the stark reality is that the world keeps refusing to do the one thing he keeps pleading for: a closure of Ukrainian airspace. Zelensky keeps driving home the point that his people are just like anyone else’s people, and they desperately need more help to save their nation and their own lives. And other countries keep responding—sincerely—that their hearts are breaking for Ukraine’s dead children and obliterated cities, but they simply can’t close the skies without risking global annihilation. The exchange rate on that calculation at this moment is the decimation of a single country that is begging the world in real time not to look away.

Enforcing a closure of Ukrainian airspace could very possibly lead to nuclear war, and for NATO, it is a non-starter. Closing that airspace may be the only way to save the lives of tens of thousands of Ukrainian civilians and preserve the sovereignty of their country. Those facts do not refute each other; they only click together like agonizing puzzle pieces.

What was so harrowing about Zelensky’s address to parliamentarians was the inability to ignore either of those truths. When he finished speaking, he received a three-minute thundering ovation from the entire House and the packed public galleries above it. Chants of “Slava Ukraini! Heroiam slava!” (“Glory to Ukraine! Glory to the heroes!”) boomed across the cavernous green space.

Those people meant it. You cannot watch Zelensky and his citizens day after day displaying this sort of bravery and sustaining the losses they have and not be deeply moved. And yet the answer to Zelensky’s plea—do more, stop them from killing us from the skies, put your money where your mouth is if you think we’re so poignant and brave—from Canada and other NATO countries remains unchanged, unmoved.

When that ovation for Zelensky finally subsided, various party leaders took turns delivering extended, self-indulgent remarks that sounded utterly lurid after his simple, heartfelt speech. The only person who said anything equal to the moment was Senate Speaker George Furey, who invoked an old Hebrew word from the Bible to sum up the courage of Zelensky and his fellow Ukrainians. “Hineni” translates as “Here I stand,” Furey said, explaining it as an expression of willingness to lead in the face of daunting odds.

But that word is staggeringly evocative of Zelensky’s wartime leadership in a more literal way, too. As Russian forces closed in at the end of February, he filmed a selfie video with key members of his government on the nighttime streets of Kyiv to dispel rumours that they had fled. He did a roll call of sorts, declaring over and over that each of them were, simply, “here.” A few days later, when the U.S. offered to move him to a secure location, he reportedly replied, “The fight is here; I need ammunition, not a ride.” And on Tuesday, he spoke to the House of Commons on a slightly wonky internet connection from a room whose hospital lighting and sparse closeness suggested a basement setting.

The nature of Zelensky’s heroic leadership of his people has been, simply, to be “here.” There he stands, where they are, bearing witness, employing his extraordinary communication skills to bring the world’s eyes to that “here,” lining up alongside his citizens in solidarity.

As the various speakers in the House droned on after Zelensky’s speech on Tuesday morning, they kept addressing him in the second person, as though they were having a direct conversation with him in public. It might have been an expression of sincere empathy, it might have been grandstanding; most likely it was both.

But Zelensky could not hear those people sitting in their pressed blue-and-yellow clothes in their tidy rows of seats in their intact city, because he was by that point long gone from the video link. On the other side of the world, darkness was falling on another night of war in Kyiv, and Zelensky was with his people, in their ever-present, perilous “here.”