Justin Trudeau already bought a pipeline. Now how about some trains?

Nov. 23: Rachel Notley suggests a short-term fix for the oil glut but Trudeau isn't buying it, while the feds ready for battle with postal workers. Plus, what exactly did Russia get up to during the last federal election? Ottawa's not saying. 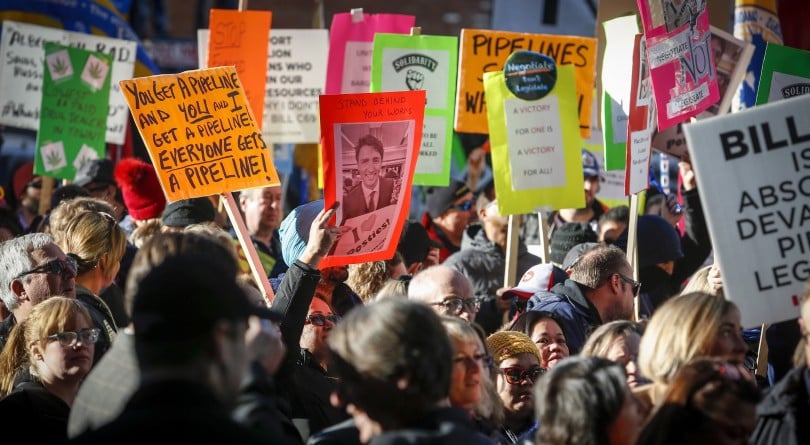 Most business groups were generally pleased with the tax measures in Finance Minister Bill Morneau’s fall economic update, though one sector felt overlooked: Alberta’s struggling oil and gas industry with its growing glut of crude. Alberta Finance Minister Joe Ceci blasted Ottawa for being on “a different economic planet” for failing to address the transportation bottlenecks hurting the sector. And so on Thursday Prime Minister Justin Trudeau travelled to Calgary to “listen” to energy leaders. But while he acknowledged Alberta’s “crisis,” he came with nothing to offer but his ear: “When you have a price differential that’s up around $42, $50 even, that’s a massive challenge to local industry, to the livelihood of a lot of Albertans. I hear that very, very clearly.” (CBC News)

What Rachel Notley’s NDP government hoped Trudeau would bring was a commitment to buy lots and lots of railcars to haul crude out of the province. With protestors outside one Trudeau event chanting “build the pipeline” the prime minister refused to say what he thought of the plan. But given Morneau had earlier shot down the idea, it’s almost certainly a no-go. As for Notley, she said her government may go ahead and buy the rail cars itself: “Whatever it takes.” (Bloomberg)

The Trudeau government is wading into the labour battle between Canada Post and its striking workers, introducing back-to-work legislation on Thursday. At the same time it tabled a motion to speed up the passage of the legislation, given Christmas shopping season pressure. The union has vowed to battle the government in court, and it may have a case to block the legislation: when the union took the Harper government to court after similar back-to-work legislation in 2011, a court later ruled the move was unconstitutional. (Canadian Press)

Regardless, the Senate has arranged to sit both Saturday and Sunday to keep the back-to-work legislation moving through Parliament. (Global News)

Raj Grewal, the Liberal MP for Brampton East, is resigning. In a statement on Facebook, he said he was stepping down for “personal and medical reasons.” (Facebook)

Add Denmark to the list of countries refusing to export arms to Saudi Arabia over the killing of a journalist and the country’s role in the Yemen crisis. Germany was the first nation to ban weapons exports, followed to Norway. Missing from this list of course: Canada. (Reuters)

Canada needs to launch a national investigation into coerced sterilizations of Indigenous women, says Sen. Murray Sinclair, who headed the Truth and Reconciliation Commission. He’s just the latest to add his voice to the call: “[The federal government] would have the ability to mandate an inquiry with the appropriate subpoena powers and the ability to summon witnesses before them to give testimony.” (Canadian Press)

The Trudeau government has repeatedly warned that Russia will try to interfere in the next federal election, and has pointed to interference in the 2015 campaign. But you’ll have to take their word on it. Alberta Conservative MP Blaine Calkins submitted a written question asking for details on the interference, but his request was rejected “for reasons of international affairs.” Said Calkins: “Canadians do have a right to know if there is Russian interference in our democratic process. It’s very unfortunate that this information is being kept from the Canadian public.” (Canadian Press)

Other opinion and analysis from around the #CdnPoli-sphere: