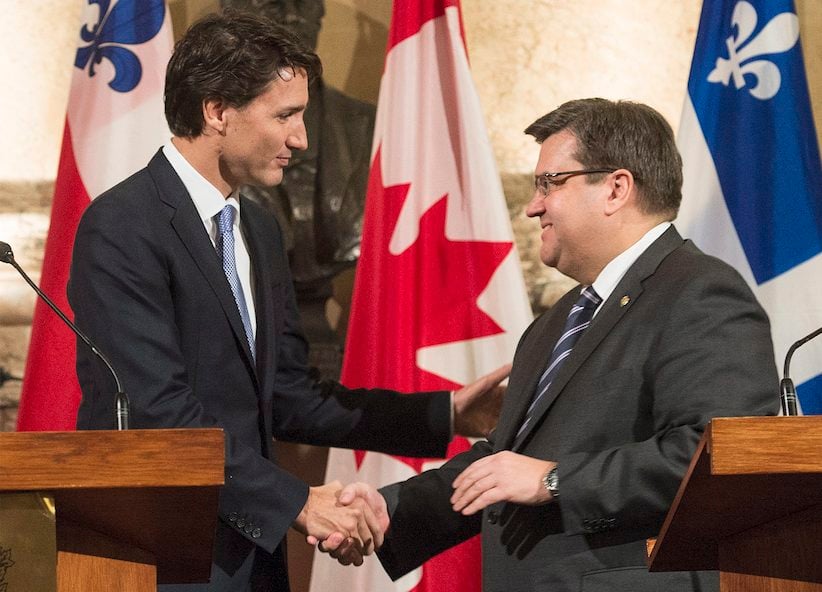 MMONTREAL — The federal government’s role is not to force cities such as Montreal to accept energy projects, Prime Minister Justin Trudeau said Tuesday, a day after his opponents demanded he tell the city’s mayor to “smarten up” and accept the controversial Energy East pipeline.

Trudeau met with Denis Coderre for 45 minutes Tuesday to discuss a range of issues including the recent decision by the Montreal mayor and the organization that represents area municipalities to reject the 4,600-kilometre pipeline.

The prime minister said his government will create a review process whereby energy companies get a chance to prove to cities and towns across the country that a project is in their best interests.

“The responsibility of the federal government is to establish a clear process whereby people can evaluate the projects in a rigorous and open manner,” Trudeau said.

He added the new review rules will include additional requirements forcing energy companies to “take into account all greenhouse gas emissions, including those upstream.”

The Conservatives have accused Trudeau of lacking leadership on the energy file.

Opposition Leader Rona Ambrose says Trudeau should be championing pipelines and calling on Coderre and other mayors to accept Energy East to enable Alberta’s oilsands to be able to be shipped overseas.

Conservative MP Candice Bergen told Trudeau in the Commons on Monday to “call Mr. Coderre and tell him to smarten up.”

Trudeau showed no signs he told Coderre anything of the sort and added to reporters his government’s new review process for pipelines and energy projects is on its way — but gave no timeline.

TransCanada (TSX:TRP) plans to build a pipeline from Alberta’s oilsands, through Montreal, ending in New Brunswick, in order to open new markets.

The project would ship 1.1 million barrels of crude oil a day and allow Alberta’s energy — which is currently landlocked — to be exported to international markets other than the United States.

Coderre and several other Quebec mayors came out last week against the project, arguing the environmental risks associated with it far outweigh the economic benefits.

That triggered a war of words with certain western Canadian politicians, including Saskatchewan Premier Brad Wall and Brian Jean, head of the Opposition Wildrose party in Alberta.

Coderre and the other mayors of Montreal’s surrounding cities and towns say clean-up costs of a potential spill could reach $10 billion, while the city would only get around $2 million a year in economic benefits from the pipeline.

Rejecting Energy East is also partly a political decision, as surveys indicate the majority of Quebecers are against the project.

Coderre hinted Tuesday that if TransCanada were more forthcoming with details of the project and address the city’s environmental concerns, his mind could be changed.

“If we have a role to play then people have work to do,” he said. “We will participate fully in the (review) process. It’s not because we are asking questions and we are asking people to do their homework that we are not being respectful.

“At the end of the day it’s all about being respected. It’s to be responsible and have a balanced approach between economic development and sustainable development and cities are playing that role to make sure we can get that.”

Coderre pointed out that the Montreal area threw its support behind the Enbridge project because “they did their homework.”