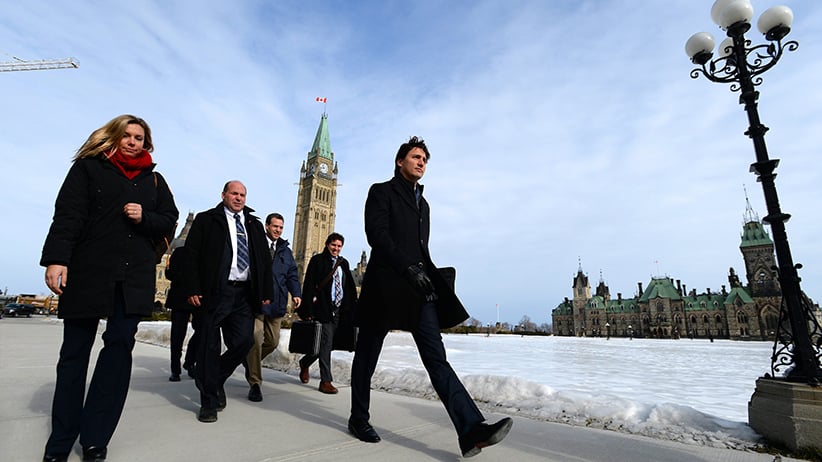 Prime Minister Justin Trudeau makes his way to a press conference at the National Press Theatre in Ottawa on Monday, Feb. 8, 2016. (Sean Kilpatrick/CP)

NEW YORK — Canada will vie for a seat on the Security Council for a two-year term starting in 2021, Prime Minister Justin Trudeau said today.

The members of the General Assembly won’t vote on candidates for the vacancy until the fall of 2020, which means Trudeau will have to win another federal election in 2019 if he wants to personally see Canada return to the UN’s most powerful body.

If Canada succeeds, it would end the country’s longest absence from the council in the history of the United Nations _ 21 years since the end of Canada’s last two-year stint in 2000.

Trudeau launched the campaign this morning from the lobby of the United Nations building in New York in front of a crowd of staffers, visiting students and foreign diplomats.

Officials said they could only recall the room being used once this way for a public event in the last few years _ for the Pope.

In his speech, Trudeau said Canada wants to revitalize its entire relationship with the world body and he underlined peacekeeping as an area where Canada can have an impact.

“We are determined to revitalize Canada’s historic role as a key contributor to United Nations peacekeeping, in addition to helping advance current reform efforts,” he said.

“And Canada will increase its engagement with peace operations, not just by making available our military, police, and specialized expertise, but also by supporting the civilian institutions that prevent conflict, bring stability to fragile states, and help societies recover in the aftermath of crisis.

He repeated his oft-made claim that Canada is back as a player on the UN stage.

“It’s time. It is time for Canada to step up once again.”

But experts says Canada can’t rely on nostalgia alone if it wants to return to the council.

“Any campaign will also have to be clear about our agenda,” said Fen Hampson, director of the Global Security Program at the Centre for International Governance Innovation in Waterloo, Ont.

“Those supporting our candidacy will not only want to hear that ‘Canada is back in the world,’ but also what exactly is it that we are bringing to the world and prepared to do.”

Paul Heinbecker, who was Canada’s UN ambassador during the 2000 stint on the council, said the western group is more competitive than any other, and Canada faces a tough battle, especially in Europe.

“There is the issue — or not — of the solidarity of the European Union. We were able to split the Europeans in 1999, but it’s not obvious to me that you can do that again.”

“This year there’s a closely fought election between three European members” he said, referring to the contest between Italy, Sweden and the Netherlands.

Lloyd Axworthy, Canada’s foreign affairs minister in the late 1990s, said Canada has lost standing at the UN over the last decade and needs to work hard to regain it.

He said Trudeau needs to come up with an agenda that shows a commitment to peacekeeping, which Canada has largely abandoned, as well as foreign aid, which has been declining steadily.