The Liberal leader is against the mission continuing, as he was against it beginning. Here's Paul Wells on the politics of foreign policy 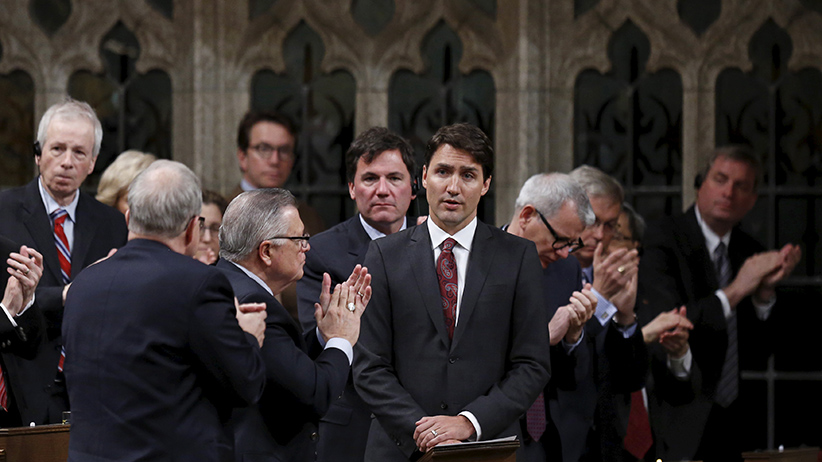 Liberal leader Trudeau receives a standing ovation from his caucus in the House of Commons in Ottawa. (CP Photo)

As trivial pursuits go, it’s hard to imagine a more trivial one—I’m trying to imagine how Michael Ignatieff would have handled the challenge another Liberal leader faced today. Trudeau got in several kinds of trouble, after all, with his decision last October to join the NDP in opposing the Canadian Forces’ intervention in Iraq. The Ottawa pundit class lined up pretty solidly against him on that one. Worse, arguably, a truly weird late-summer burst in public support for the Liberals, as measured through several polls, ended more or less at the moment he joked about Stephen Harper’s CF-18s.

Now it’s six months later, the Harper government was seeking to extend the mission on near-identical terms (although now CF-18s will sometimes fly into Syrian airspace as well), and the Mulcair NDP had already announced it will oppose the mission once again. Three weeks ago, it had seemed Trudeau was using a TV appearance to test the public appetite for a change of heart. I ran into a Liberal MP on Metcalfe Street soon after, who asked what I thought his leader would do next on the file. I left with the impression it was all up in air.

But when the moment to pick a lane arrived this morning, Trudeau didn’t let the suspense last long.

He’s against the mission continuing, as he was against it beginning. Comparing his speech to his opponents’, I was struck by how narrowly he focused on that. Tom Mulcair’s remarks drew heavily on historical precedent—Afghanistan and Libya, in particular, as two cases of high hopes that turned sour. Harper, meanwhile, pointed out that Canadian troops are part of a broad coalition of the sort of countries with which Canada normally likes to surround itself. Only Harper, for instance, mentioned Barack Obama by name, because even though he can barely stand the guy, he understands that Obama is generally popular in Canada.

Related: John Geddes on recalling when Harper was fed up with fighting

Everyone was guilty of a little cheap hocus-pocus. The Prime Minister referred to the other coalition members as “United Nations members,” which is true in the sense that that term is more or less synonymous with “countries,” but they are not acting here under a UN mandate, so he was basically blowing smoke. Mulcair purported to spot a Harper plot to coordinate with and prop up Syria’s Assad regime. He was plainly reading from remarks written before Harper told the House that Canada will not seek Syrian government permission before operating over Syria. Trudeau found the expansion into Syrian airspace alarming, even though his best man on the file, Irwin Cotler, demanded such an expansion six months ago. It was not one of the great debates, even by House of Commons standards.

My assignment today, as we divvied up coverage chores, was to focus on the party politics, so I won’t belabour the question of substance except to say I support extending the mission. In that, I seem to be pretty clearly in the majority. The polls I’ve seen, including some that Jason Kenney was tweeting during his lunch hour, suggest Canadians support what the Harper government is doing in Iraq by about two to one. And Harper has that majority support all to himself; three parties are fighting for their share of the minority position.

Related: What the leaders said about expanding the mission against Islamic State

Trudeau’s bet is, essentially, that the substance of the ISIS debate is less salient than the more general impression that he is a straight and consistent shooter. He is beginning to be predictable, at least: whether the issue is legalized marijuana, niqab-covered faces, boycotting Sun News or forbidding pro-life stances in his caucus, he doubles down on his positions once they get him in trouble. The contrast with Ignatieff, and with some other Liberal leaders of the past, is refreshing. Liberal caucus members can stop asking whether he’ll shift positions once things get hot; he plainly likes the heat and isn’t for shifting. The question of the year will be whether Canadians judge Trudeau, on the whole, to be on the right side of these debates. Consistency is worth noting, but it’s not the whole game. Stéphane Dion was a straight shooter too.