Justin Trudeau in the real world

Paul Wells: The prime minister's so-called 'state visit' trip to India was so tone-deaf, hopeless and unserious he might as well never have gone

When travelling abroad, it is handy to bear in mind that the people you will meet are real people with real lives.

Justin Trudeau likes to preface his answer to any question about any secession movement anywhere with, “Well, as a Quebecer…” He needs to stop saying that. When he says that, he seems to believe that simply residing on Ave. des Pins in Montreal confers expertise on the intricacies of the customary international law of secession.

In most of the world, secession is not a once-in-a-generation five-week downer that causes awkward moments around the dinner table. In India, the 1947 partition that led to the creation of Pakistan created a river of blood, hundreds of thousands of deaths, tens of thousands of rapes, millions internally displaced, betrayal, upheaval and grief. In much of India it’s hard to walk into any room without meeting people whose family stories prominently feature harrowing tales of this massive human tragedy.

Visitors aren’t expected to sit for an essay exam on the ramifications of all this for the modern-day Sikh independence movement. Maybe a highly-hypothetical secession of the Sikh homeland would go more smoothly! But this is the emotional landscape within which such questions are considered, in a real place with real people.

So maybe if you visit India, don’t spend the week parading across the landscape dressed like the Griswolds, to be met at a couple of stops by an easily-identifiable convicted violent extremist who has a well-documented recent history of popping up in British Columbia at Liberal events and on Liberal organizational charts. Especially if the fellow in question specialized in violence related to the very sectarian disputes Trudeau is suspected of taking too lightly.

As an enterprise in emotional reconciliation with an Indian government that has long suspected Canadian politicians of preferring photo ops and election-campaign ground game to serious reflection on the complexities and challenges of Indian multiculturalism, this trip is already shot. There is no reason to fear a prolonged chill in Canada-India relations; not everyone carries a grudge forever, and it’s not as though Canada and India haven’t hit speed bumps before. But this prime minister, Justin Trudeau, might as well never have gone to India, for all the good he has accomplished.

But, we’ll hear, there was $1 billion in trade agreements! Sure. And in 2003, Jean Chrétien left India boasting of $3.4 billion in deals, in 2003 dollars. As a trade mission, this one has been curiously perfunctory. Trudeau spent a half-day meeting CEOs in plush chairs tilted at 45 degrees to accommodate news photographers, something he enjoys doing because he hopes it’ll keep them thinking about Canada as an investment destination. But he visited none of those CEOs’ factories or office suites, scoped out no new site where Canadian developers or investors might make a difference in a country where hundreds of millions still live in poverty. If you’re all business, act like it. 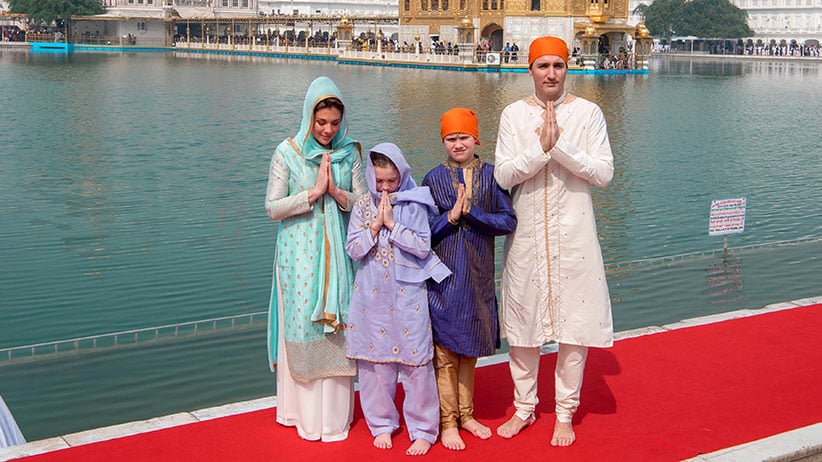 As a cultural trip, it’s been tone-deaf. India is a place that exists today, in the 21st century, as more than a memory play of something half-familiar from yoga class. Its artists and writers are grappling with complexity. Its human-development challenges are immense. Its economic promise is vast. Its regional strategic landscape is really not a joke. The costumes were fun on the first day but at some point one starts to worry Trudeau will show up at The Hague wearing wooden shoes, or in Buenos Aires dressed as a gaucho.

As lots of people pointed out before me, it’s actually not true that a groundswell of affection would greet Angela Merkel if she appeared in Toronto wearing Alberta Boot Company boots and a ceinture fléchée. And if she was still doing it on the sixth day of a visit, some of us might start to wonder whether she was taking the piss.

Perhaps the next time the PM goes over fun wardrobe ideas for a foreign trip, somebody on his staff could ask whether he also plans to bring any project serious enough to counterbalance the elevated likelihood of coming off like a giggling schoolboy. A simpler wardrobe rule might be: “You do you.”

This trip began with an omen when the official PMO news release announcing it called it a “state visit.” Canadian heads of government don’t make state visits; governors-general do. Prime Ministers make official visits. In Ottawa, people familiar with the distinction are so common they are practically falling from the trees.

Apparently none fell on anyone in Trudeau’s staff. And so this kind of is a state visit after all, insofar as it’s premised on the assumption that its protagonist is a ceremonial figure who is not authorized to make executive decisions. It follows a China trip in which the PM arrived in chinos and left with no trade deal, and an APEC summit in Danang that went so badly the Liberals had to send a sometime Liberal party factotum to Tokyo weeks later to mend fences. It’s not a great thing when the question that arises, consistently, when a prime minister travels is what the hell he thinks he’s doing.

Trudeau was elected in 2015 amid constant accusations that he was not serious or prepared. He subverted those claims by having superior campaign organization, a different and defensible argument about the macro-economic moment, and many months of personal rehearsal. “Hope and Hard Work” was a mantra the Liberals took more seriously than you’d have thought the slogan could bear. It damages this prime minister personally, and Canada strategically, when he keeps shortening it to “Hope” every time he packs his bags.