Anne Kingston: When pressed to be personally accountable, the PM has a tendency to transform things into a 'teaching' moment. It did not work today. 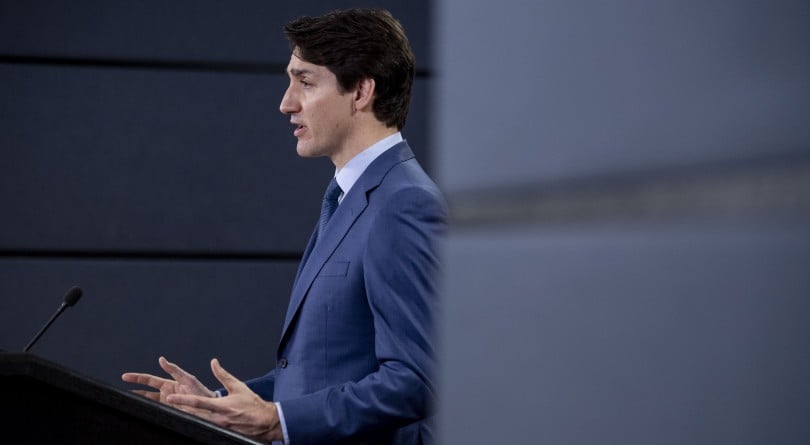 Justin Trudeau dropped by the National Press Gallery on Thursday morning to issue a non-apology apology before planning to fly to Iqaluit where he’d express regret for government mistreatment of Inuit during TB epidemics between the 1940s and ’60s. Canada’s prime minister is a champion of issuing fulsome apologies when they are official and historical and don’t involve his own behaviour. He understands the foundational importance of reparation. He tearfully apologized to former students of Newfoundland and Labrador residential schools for the horrific treatment they experienced. He apologized for Canada not allowing entry to the MS St Louis in 1939. He apologized for the turning away of the Japanese vessel Komagata Maru in 1914.  Trudeau’s sweeping mea culpas became so ubiquitous the BBC asked:  “Does Justin Trudeau apologize too much?”

No one was asking that question Thursday. There had been rumours a show of contrition from the PM would be the PMO’s latest gambit to quell the month-long controversy over serious allegations the government interfered with a criminal prosecution and exerted pressure on then attorney general Jody Wilson-Raybould for partisan ends. That didn’t happen. Trudeau’s skill addressing past wrongs was absent; he appeared tone-deaf to the present moment. Instead Trudeau doubled down on his probity while confirming some of Wilson-Raybould’s bombshell testimony.

Trudeau did remind the AG that he was an MP from Quebec at a Sept. 17 meeting, he said. He did confirm she told him she had made a final decision; he asked her to “revisit” it, he said, and she said she would. She didn’t get back to him so he assumed her decision was no longer final.

Trudeau has a tendency, when pressed to be personally accountable, to transform it into a theatrical “teaching” moment. That we saw in the near-four minute apology  he gave in 2016 after he rushed through the House of Commons to grab an MPs arm and inadvertently struck MP Ruth Ellen Brosseau.

Trudeau’s focus on “lessons” learned Thursday more closely echoed his response to a controversy that engulfed his government last year: a nearly 20-year-old allegation that he’d inappropriately touched a female reporter. Trudeau was firm that his behaviour was “appropriate”; it was her perception that was off:  “I think the essence of this is people can experience interactions differently and part of the lesson we need to learn in this moment of collective awakening … people in many cases, women, experience interactions in professional contexts and other contexts differently than men.”

Wisely, Trudeau did not recycle the “women experience interactions in professional contexts and other contexts differently than men” line on Thursday. But he came close: “Situations were experienced differently and I regret that.” Exactly what he regrets was not clear. He did speak of “next steps” involving “external expert opinions” on such things “as the dual role of the minister of justice and the attorney general.”

If the presser was intended to quell the controversy, it failed. Maybe it was assumed that Trudeau’s physical presence equals transparent and accountable government. His respect for justice, Trudeau pronounced, is unassailable, part of his DNA. After all, his father was once the justice minister. He recast the issue at hand in now-rote terms: the government’s unwavering commitment to protect “9,000” jobs and pensioners. He could have made the point that such noble ends meant they screwed up inadvertently on the “means” part. But he didn’t.

Instead of showing humility or contrition over a now-seismic situation, Trudeau lectured: “I believe real leadership is about listening, learning and compassion,” he said. Yet Trudeau’s compassion, his vaunted EQ, has been MIA.  That was evident hours after Wilson-Raybould’s devastating and credible testimony to the Justice Committee. Trudeau spoke to reporters in Montreal, where he was about to celebrate a Liberal by-election victory. He knew his former star cabinet minister had just recounted experiencing workplace harassment: months of feeling pressured to the point of anxiety, of receiving “veiled threats” and “waiting for the other shoe to drop.”  He expressed not an iota of concern for her.  “I strongly maintain, as I have from the beginning, that I and my staff always acted appropriately and professionally. I therefore completely disagree with the former attorney general’s characterization of events,” he said, adding he hadn’t had time to fully review her comments.

Trudeau cleaved to that empathy-free version on Thursday. He didn’t mention the human costs: the loss of two key cabinet ministers on a matter of principle or the resignation of his principle secretary Gerry Butts. The closest Trudeau came to expressing regret was in saying “there are many things that we would have done differently.”

A befuddled press corps called for clarity: “Just to clarify, are you apologizing for anything today?,” one reporter asked. “I will be making an Inuit apology later today,” Trudeau answered without apparent irony. And with that, the PM who had just said he doesn’t want to look back, but wants to look ahead, boarded a plane to apologize for long-ago wrongs, leaving a sorry, muddled present in his wake.