Justin Trudeau is not the same. Let's start with that hair.

To notice the PM’s hair is to be aware of the passage of time. Trudeau has changed—not just over the past couple of months, but over nearly five years of governing. 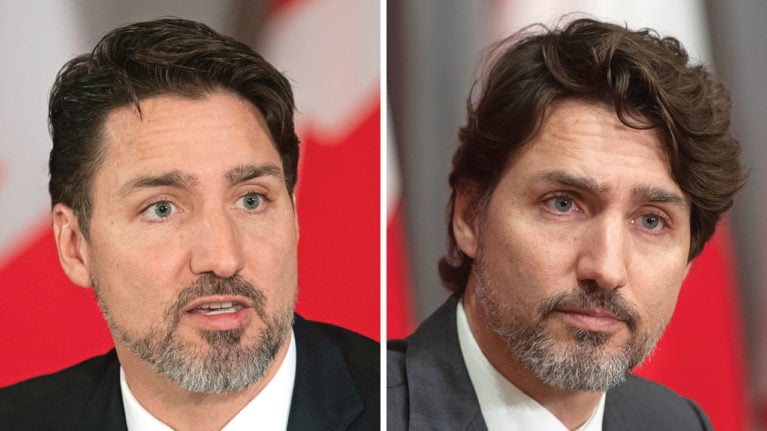 The nation has already reckoned with the beard.

The beard—to some a harbinger of a more-serious style of governance, or a more-mature prime minister, and to others just a goddamned beard—is here to stay.

The beardless Justin Trudeau had been a Justin Trudeau of hope and colourful socks. A politician of close shaves, on his person but also on matters of national interest. A man of clean-faced about-faces. A leader, comfortable in the spotlight and confident of his divine birthright, amen, who needed no soul patch to harness attention. (We do not talk about the soul patch.)

And, well, it turned out that the bearded Justin Trudeau was basically the same guy, less a majority mandate.

It is probably safe to say that our fellow countrymen have tired of interpreting the deeper meaning of the Prime Minister’s facial hair. But, reader, let us turn our attention to another phenomenon entirely: the hair on top of his head.

READ MORE: Footprints of the coronavirus: How it came to Canada and went around the world

As recently as February the Prime Minister’s ‘do was as kempt as kempt can be—short and coiffed enough to seem adequately business-like, but long enough for seemingly-intentional fly-aways to give the vague impression that Trudeau could at any moment loosen his tie and crack open a Labatt 50.

It may be difficult for any of us to believe that February was not so long ago, and that just two months have passed since Canadian life felt in any way normal. As the days blur together, to notice the Prime Minister’s hair is to be aware of the passage of time. To feel in some way grounded. To know that we are still in the middle of the tunnel of our national nightmare.

In early May it is easier to relate to Trudeau than ever—not because of what he says, but because he needs a haircut. Because like the other dads of this country he’s starting to look a little less kempt. Because on a windy day, he is bested by his fringe.

It is easy enough to understand how we got here. While Trudeau self-isolates at home, as he is asking Canadians to do, he isn’t about to hire a private barber. Perhaps, like many of us, he is alarmed at the prospect of picking up a pair of scissors himself. Perhaps his communications team has forbidden it. Because there is a message in the hair: follow the rules. Do not visit black market hairstylists. (Asked whether a haircut is on the horizon, a spokeswoman for Trudeau clarified in an email: “Geez, I know he can’t wait to get one.”)

Of course, none of this actually matters. Have no fear: I am not about to argue that a couple of months without a trim means Trudeau will govern any differently. I will not, and cannot, suggest that this superficial change transforms our PM into a world-worn, solitary Luke Skywalker, staring out into the distance ready to impart a lifetime of wisdom. Besides, it may only be a matter of time before we are discussing a Prime Ministerial man bun.

But consider this. Trudeau’s hair is now almost as long as it has ever been. It is as if he is going back to his free-spirited roots. It is as long as it was during the days of the soul patch (and moustache) that we do not talk about.

And the fact he looks more and more like a past version of himself makes it all the clearer that Trudeau has changed. Not just over the past couple of months, but over nearly five years of governing, seven years of party leadership and a dozen years of sitting in the House of Commons.

The man who stands outside the cottage is noticeably more demure in his responses to reporters’ questions. He has delegated substantial responsibility to a trusted deputy prime minister, Chrystia Freeland. Plenty of pundits have noticed his relative inactivity on social media, at a time when it feels as though the entire world is sitting on a couch craving content. Would Justin Trudeau, circa 2013, have missed out on that opportunity?

It is not so difficult to entertain the idea that this cottage-abiding man, sans perfect hair, might be having a weird time just like the rest of us. And on the other hand, it is more difficult to imagine this man calling a former cabinet minister a “piece of shit” in the House of Commons (it happened when he had the soul patch) or elbowing a member opposite in the chest during an unparliamentary scuffle. It is more difficult to imagine this man making a shirtless cameo in someone’s wedding photo or even rolling his sleeves all the way up to the elbow.

Maybe the longer hair makes it easier to notice that the Prime Minister seems more mature—more statesmanlike, more weathered by the travails of his position, and more prepared for the gravitas that a global pandemic and economic crisis requires.

Or maybe it’s just the beard.