Trudeau eulogizes his father and upholds a transformative legacy 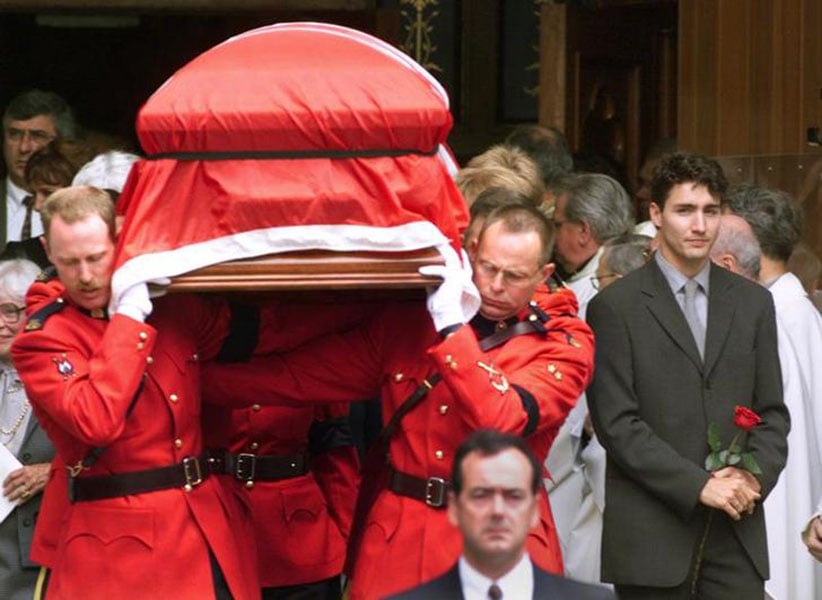 It was the most riveting moment in a day of high drama. In Montreal’s cavernous Notre Dame Basilica, 28-year-old Justin Trudeau came out from the shadow of his family’s privacy and stepped into his father’s shoes, if only briefly. On one of the most wrenching days of his life, his father’s flag-draped coffin not six metres away, the emotion was there—in the tone of his voice, in his deliberate walk and the conviction of his words.
In a 15-minute eulogy, he brought back Pierre Trudeau’s animating vision of a unified Canada, evoking the idealism of the time and echoes of once-powerful phrases like “The Just Society.”

The young Trudeau’s words capped five days of official mourning for the former prime minister, who died at his home in Montreal on Sept. 28. In unleashing memories of a fondly cherished past, Justin provoked active speculation about his political future. But for governing Liberals there were more practical concerns: whether to go to the polls in the gauzy afterglow of this reborn Trudeaumania, a time when grown men cried and a nation paused to mourn.

What would he have thought of it all, the raw feelings aimed so squarely at him? There is ample evidence that the austere Pierre Trudeau disapproved of showy emotional displays. He was, after all, the prime minister of “reason over passion.” If there was one thing Canadians knew about him during his 16 years in power, it was that his feelings were deeply encrypted, his interior life a private preserve. Still, would he have been moved by the piles of red roses at impromptu shrines, the 50,000 mourners who filed past his casket as he lay in state, first in Ottawa and then in Montreal, or waited by the train tracks to touch the car that carried his body home? We’ll never know. But some of Trudeau’s closest associates and political allies think they do. Montrealer Stratton Stevens, an old friend who lived near Trudeau and “held his hand” the night before he died, claimed that the former prime minister was a modest man who shunned ostentation. “If he had his way, he’d have been buried in a little village in a little church service,” Stevens said.

Others thought Trudeau would have appreciated the people’s grief and love. Not for himself—but because of his sons, Justin, and Sacha, 26. They were the famous Christmas babies born into the fishbowl of 24 Sussex Drive, who grew up to be his closest companions and were with him the day he died. Former Nova Scotia premier and Trudeau cabinet minister Gerald Regan, who attended the funeral, recalled how Trudeau worried that the boys would be hurt by media and Opposition attacks levelled at him when he was in office. “He told them not to worry,” said Regan. “He said, ‘Look, there are people out there who still like us.’ ” Standing on the steps of the basilica, Regan then waved his arm at the thousands of mourners waiting outside. “He would have wanted his sons to see this,” he said.

And what a sight it was. For five days, Justin, a Vancouver teacher, and Sacha, a Montreal filmmaker, witnessed an unprecedented outpouring for their father. But while the two stalwart sons watched the wave of tributes, Canadians were also watching them—as well as their half-sister Sarah Elisabeth Coyne, 9. Born when Trudeau was 71, she made a rare public appearance at the funeral with her mother, constitutional expert Deborah Coyne.

The glare intensified when Justin rose from the first pew in the basilica. With a white handkerchief in one hand, he walked stiffly to the lectern. Until that moment, he had been almost unknown to Canadians. But when he started his eulogy he had their undivided attention. “Friends, Romans, countrymen,” he said in what was a quirky start to an otherwise compelling oration. And many among the 3,000 mourners knew a thing or two about public speaking: in the high-vaulted church sat row upon row of dark-suited politicians, a who’s who of Canada’s ruling elite stretching back four decades that included former prime ministers Joe Clark and John Turner. Cuban leader Fidel Castro, well-known for delivering three-hour speeches, was also there, seated close to former U.S. president Jimmy Carter, as well as Prince Andrew. Actor Margot Kidder, who cherished her 20-year friendship with Trudeau, arrived two hours before the funeral to take her seat. And Montreal poet and music icon Leonard Cohen, one of Trudeau’s honorary pallbearers, sat nearby.

In a speech that was both moving and highly theatrical, Justin recalled his father as a doting dad who raised his children with an old-fashioned set of values. “He taught us to believe in ourselves, to stand up for ourselves, to know ourselves and accept responsibility for ourselves,” he said. “We knew we were the luckiest kids in the world and we had done nothing to actually deserve it.”

The dark-haired Justin then moved easily from the personal to the political. With words so evocative they could have been written by a professional speechwriter, he spoke of Trudeau’s exit from political life in 1984. He reminded mourners, and a far larger television audience, that his father came out of retirement in the late 1980s and 1990s to fight against the Meech Lake and Charlottetown accords, linchpins of former Conservative prime minister Brian Mulroney’s failed attempts at constitutional reconciliation with Quebec. As Mulroney listened in a distant pew, Justin said: “He came back to remind us of who we are and what we’re all capable of. But he won’t be coming back anymore. It’s all up to us, all of us, now.”

An eloquent tribute—but one that, in a cathedral packed with opinionmakers and rainmakers, took on a far greater significance. Shortly after the service, the whispers began about a possible political future for Justin, helped along by the near certainty that Prime Minister Jean Chrétien is preparing to call a November election. Referring to Justin’s eulogy, former Quebec Liberal leader Claude Ryan said: “It occurred to me that perhaps this was the first manifestation of a dynasty. And, at the least, I was led to believe that the Trudeau family had not said its last word. We may hear a lot more from this young man.”

To date, Justin has shown no outright interest in a political career. As a child growing up at 24 Sussex—and travelling the world with his famous father—he was the most photographed kid in Canada. But as a young man, he has shunned politics and public life. Since 1999, he has taught drama and French to students at Vancouver’s West Point Grey Academy, a private school with a spectacular view of English Bay and the North Shore mountains. His phone number is listed in the Vancouver book. He tends more to Buddhism than the strictures of his father’s Roman Catholicism. Last week, when he became a sudden celebrity and reporters came snooping around his apartment in the South Granville area, one of his neighbours pleaded, “Please leave him in peace. He’s such a nice boy.”

During a wide-ranging interview with Maclean’s in 1998, Trudeau’s former wife, Margaret, said her son Justin was “a very romantic boy. He’s open to life—he has my soul.” She added that his decision to become a teacher came to him unconventionally. “He called me,” she said. “He told me ‘Mom, I climbed up to the top of this mountain and I had the most extraordinary experience. I’m going to be a teacher.’ ”

Extraordinary, too, was the love and loyalty the Trudeau sons showed their father. Before moving to Vancouver in 1997, Justin and his late brother, Michel—who was 23 when he died in an avalanche in British Columbia in 1998—had lived with their father in the family’s renowned Art Deco mansion. “Justin was the one who was consistently there for Pierre,” Margaret said. Justin’s decision to relocate 3,600 km away (Michel moved to British Columbia as well) meant Trudeau, then 78, became an empty-nester for the first time. “It was devastating for Pierre,” said Margaret. “And Justin, who is our tender heart, was very upset about it. He had a hard time leaving his dad.” Shortly after that, Sacha, who was living in Toronto and who Margaret has described as “Pierre’s clone,” moved back to Montreal to keep his father company. The two lived together until Trudeau’s death.

Justin had not been able to escape public scrutiny altogether. Two years ago, he was unwillingly thrust into the spotlight when, with Michel’s death, he became the family spokesman. Since then, Justin and Margaret have worked together to promote avalanche awareness. Occasionally, he has been asked about entering politics—and he has not completely ruled it out. “I am a teacher,” he said recently. “And I believe in making a difference. If I felt that could be done in politics I might end up there, but I’m not making any plans around it.” After his eloquent eulogy last week, some Canadians no doubt wished for a firmer commitment—as the nation struggled with its loss.