Justin Trudeau took over the Liberals two years ago. Now, he has six months to reverse slipping numbers. Paul Wells on Trudeau's slide. 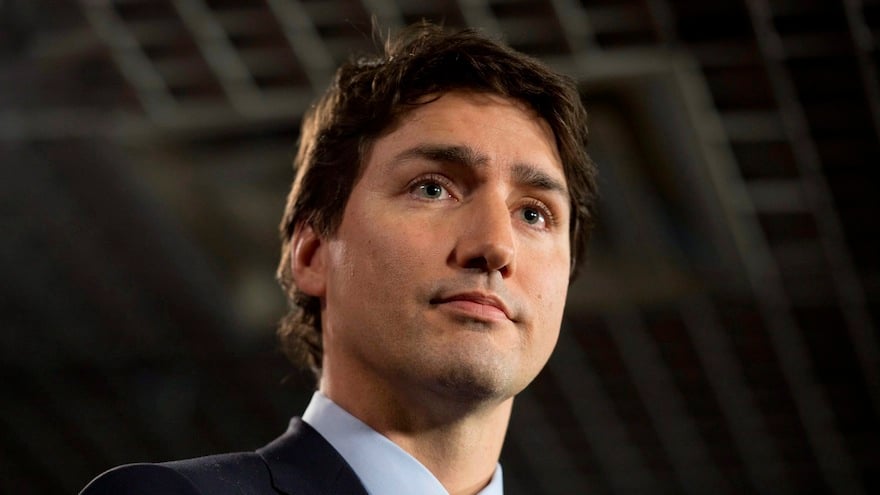 Happy anniversary, Justin Trudeau, elected leader of the Liberal Party of Canada two years ago on Tuesday! Welcome to your Carlsberg years. We brought you a new Ipsos poll: You’re down 12 points since September on “best prime minister.” Since February 2014, you’re down seven points on each of these value measures: “someone you can trust,” “someone who will get things done,” “someone who wants to be prime minister for the right reasons,” and “someone who will best lead and represent Canada on the world stage.”

On every one of those measures, Trudeau used to lead the three main party leaders. On every one, Prime Minister Stephen Harper now does. And on each of them, NDP Leader Thomas Mulcair has also gained ground while Trudeau slid.

On the bright side, Ipsos did find one measure where Trudeau is up. He’s risen a point on “someone who has a hidden agenda.”

In some ways, it’s not surprising that the burdens of leadership are starting to weigh on Trudeau. For two years, Trudeau has borne all the expectations of a frontrunner, with almost no control over events. In six months, at least he’ll know how it ends.

The powerlessness of these two years has had its uses, for it has saved him from at least one headache that tormented his immediate predecessors. Michael Ignatieff and Stéphane Dion knew that if they voted against Harper’s minority governments on important business, they might bring him down. The country would be in an election, and it would be up to the voters to decide what they thought of such sport. Trudeau couldn’t bring this majority government down if he wanted to, so he has been free to send any message he likes with his caucus’s votes.

A chastened Liberal party has its uses, too. Jean Chrétien was a lousy Opposition leader who spent every day in that purgatory, from 1990 to 1993, standing with his back to a caucus of Nervous Nellies who felt free to hold their loyalty to him in abeyance, much as Chrétien and his valets had done to John Turner. Trudeau inherited the smallest parliamentary caucus of any Liberal leader in the party’s history. He has astonished everyone by culling it aggressively, ejecting every Liberal senator, then the disgraced MPs Massimo Pacetti and Scott Andrews. The pedagogical value of equipping the tiny Liberal frigate with a well-trodden cedar plank to mid-air is considerable. After the decade they’ve been through, Liberal incumbents probably thought they had nothing left to lose. Trudeau has corrected that impression. They could lose their seats in caucus from one day to the next. As a result, today’s Liberal naysayers are less likely than their forebears to start the day by speed-dialling the Globe and Mail to dictate their latest analysis of the leader’s shortcomings.

If they dared, they might have much to discuss. Since the beginning of 2015, the poll aggregator ThreeHundredEight has projected the Liberals winning fewer seats than the Conservatives, based on a rolling average of polls. The NDP under Mulcair has begun to show a little life. To believe Trudeau could take the Liberals back to power in a single step this October, you have had to believe he could at least triple his party’s seat count. That was always a long shot. Now it feels more like one.

You could chalk some of this up to worn-off novelty. But there is something deeper in Trudeau’s decline. He is running out of benefit of the doubt in precincts where he might have assumed the supply was unlimited. Take Michael Harris, the journalist whose book Party of One consolidates his place as one of Harper’s most tireless critics. In a recent column, Harris served notice that Mulcair may be a more serviceable leader for Canada’s anti-Harper forces than Trudeau.

Trudeau has been “skipping time in the House of Commons,” Harris wrote, and on energy issues especially, Trudeau “has been criticized for being Harper Light.” But his “Big Blunder,” Harris wrote, with upper-case Bs, was Trudeau’s decision to support Bill C-51, the Conservatives’ anti-terrorism bill. (Trudeau wants it amended, and hopes to lead the government that will do it, but, in the meantime, he’s not opposing the bill in principle.)

“Canadians are longing for authentic leadership,” Harris wrote. “Only two politicians in Canada are providing it: Green Party Leader Elizabeth May and Mulcair.”

Harris isn’t alone. Mulcair’s “best prime minister” score on the Ipsos poll was 18 points behind Trudeau’s last fall. Now he’s a point ahead. (Harper is back ahead of them both.)

Normally, around now, my Big Book of Columnists’ Clichés tells me, I should chide Trudeau for his “lack of policy” and urge him to “fill in the blanks.” But there are fewer and fewer blanks. He’s for incurring new debt to build infrastructure, a move recommended by former Bank of Canada governor David Dodge. He’s for legalizing marijuana. He has told people who oppose abortion not to bother running for his party. He was against sending Canadian jets to fight Islamic State, twice, and for C-51, with an ostentatious asterisk. He likes the Keystone pipeline but not Northern Gateway. He lauded floor-crossing ex-Conservative MP Eve Adams for her “strength and ability at a tremendous level in the Conservative government” and her “deep commitment to public service.” His keynote speech at last year’s Liberal convention was about an imaginary woman, “Nathalie,” he’s never mentioned again.

Maybe the more he fills in the blanks, the less room there is to imagine there’s more to him.

I keep coming back to his Petroleum Club speech in Calgary, where he promised a federal-provincial conference to set a “national standard” for reductions in carbon emissions. Provinces would design their own programs. A Trudeau government would provide “targeted federal funding to help the provinces and territories achieve their goals.”

This works fine, until the moment you apply any thought at all to it. If the provinces design the programs, they keep the revenues. Where does the federal funding go? If it’s to provinces that achieve huge reductions, that doesn’t help the ones making less progress. If it’s to provinces that don’t achieve reductions, it’s an explicit federal reward for lacklustre effort. Let us call our two provinces “Quebec” and “Alberta.” Where does Trudeau’s targeted funding go? Why? With what effect on opinion in the other province?

The closer Canadians get to a choice, the more questions like this matter. Charles Péguy wrote that everything begins as mystique and ends as politics. “If we work hard and stay optimistic,” Trudeau said a week before he won the Liberal leadership, “we will put forward an irresistible alternative to the Conservatives 30 months from now.” He has six months left.