You can dislike what the Liberal leader is proposing, but he sure is proposing stuff. Paul Wells on Justin Trudeau's carbon proposal 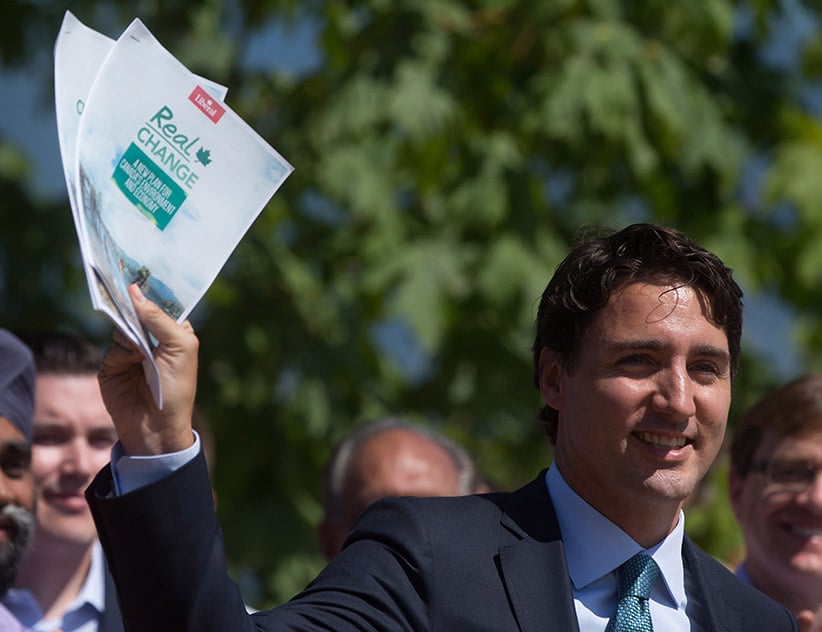 Liberal Leader Justin Trudeau holds a copy of his environmental platform after announcing details of it at Jericho Beach Park in Vancouver on June 29, 2015 (DARRYL DYCK/CP)

“Make no mistake,” Justin Trudeau said today at Jericho Beach, west of Kitsilano, B.C., with the usual brochette of Liberal MPs and candidates behind him. (I assume that, by now, they are inflatable and can be moved into position in less than three minutes.) “The Liberal party will be putting a price on carbon.”

It took the Conservative party all of 15 minutes to design a Twitter card incorporating the quote, and we’re pretty sure that’s the line from Trudeau’s speech that you’ll be hearing most between now and election day. Actually, there weren’t a lot more lines than that; here’s the text of the speech, perhaps the shortest since Trudeau kicked off his “Real Change” series of announcements in early May. (Previous announcements focused on family taxation, democratic reform and relations with the United States.) But, as before, today’s speech came with a background document that corresponds roughly to a chapter of the Liberals’ fall election platform.

Trudeau’s environment-and-economy chapter is thinner and contains fewer specific pledges than his democratic-reform chapter. That’s not necessarily a bad thing; the democratic-reform package was hard to digest, will be hard for any government to implement, and presents a lot of targets for criticism or simple curiosity. Trudeau’s green package is more streamlined—although, as the Conservative war room was characteristically quick to notice, not devoid of KICK ME signs facing Trudeau’s opponents.

I have earlier asked questions about the notion of a federal fund to encourage provincial action toward meeting carbon-emissions targets. I think they’re pretty good questions. Today’s Liberal backgrounder seems to address these questions without actually answering them. To wit:

A portfolio of actions appropriate for the diverse economies of each jurisdiction is the only way to significantly reduce Canada’s emissions; there is no one-size-fits-all solution. But the cost of inaction is too high, and the federal government has a responsibility to lead, create the conditions and provide the support required for Canada to meet its climate targets.

Okie-dokers then. The family tax package also included a page devoted to costs and revenue sources for Trudeau’s proposed reforms; there’s no such thing here. On the “more details” vs. “fewer details” spectrum, he clearly opted for “fewer details” today.

I will not quibble further, especially because the environment is a classic case of an issue for which the goal is not so much to find optimal policy as it is to signal to your tribe. More generally, though, there’s evidence to suggest that, while Trudeau has been energetically shoving policy out the window, his party’s slide in the polls has stopped, or even begun to reverse. Éric Grenier at threehundredeight.com is back from two weeks’ vacation; his new aggregate of publicly available horse-race polls released during his absence suggests that the Liberals are ending June a little higher than they began. The NDP—impressive, given Gilles Duceppe’s return to the Bloc Québécois leadership—continue to hold their support; the Conservatives, ominously, continue to lose support slowly.

What’s increasingly clear is that, while it’s possible and, indeed, intermittently entertaining to criticize Trudeau for the substance of his proposals, it’s getting harder to claim he has made none. And it’s starting to seem that, as a consequence (or at least a coincidence), some voters are starting to give the Liberals a second look.

Will these trends continue? I’ll tell you some time after Oct. 19.