Justin Trudeau masters the art of the political answer

At the Maclean's Town Hall, Trudeau proves that behind his 'sunny ways,' there is an at times Harper-esque politician 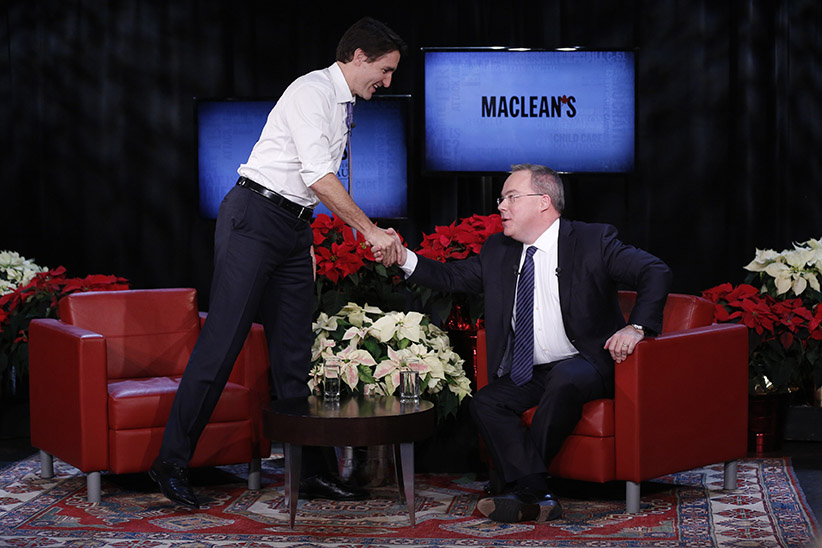 Prime Minister Justin Trudeau’s sunny ways led him Wednesday to a small audience in Ottawa where he would take questions for a full hour — a daunting proposition for most politicians. But the Maclean’s Town Hall provided more evidence that the man who could once be counted on to put his foot in his mouth is becoming a skilled politician. The surprise lies in some early parallels with Stephen Harper.

Like the former prime minister, Trudeau is eschewing the standard sit-down interview with Canadian journalists in favour of alternatives. Harper preferred to sit in front of a business audience with a moderator who would let him ponder economic questions rather than pesky queries about Senate reform or the number of Conservatives charged with breaking election rules. Like Harper, Trudeau is playing to his strength. A town hall format is particularly geared to Trudeau’s ability to connect with people. It’s intimate, with the audience close by, so he can interact easily with them.

Unlike Harper, the new Prime Minister regularly takes questions from journalists (he scrummed with reporters about two hours before the Maclean’s Town Hall—a scrum being a particularly undignified style of press conference in which a politician is surrounded by journalists yelling questions all at once), and he has made frequent appearances at the National Press Theatre in Ottawa. Still, Vogue and the New York Times recently published stories that made clear he sat down with American journalists before doing any one-on-one interviews with Canadian reporters. One-on-one interviews with the press gallery allow for too many follow-ups, and carefully worded questions from people who have heard the rehearsed answers many times before. So now comes the town hall.

Related: Justin Trudeau and the role of a lifetime

Fresh out of a meeting with Aboriginal leaders, Trudeau was asked about guaranteeing the families of missing and murdered Indigenous women would remain at the forefront of a national inquiry. The woman posing the question was Maria Jacko, whose niece, Maisy Odjick, disappeared without a trace from the Ottawa area seven years ago.

Trudeau, his voice low and soft, thanked Jacko for sharing Maisy’s story and spoke of the importance of including the women’s families so they can heal. “I certainly hope to be able to find answers in your case and so many others,” he said.

But that’s one of the files the Liberals tackled right away. It would be easier to for Trudeau to trip up on an issue for which he has no firm commitments, like child care. Rachel Giese, Chatelaine editor-at-large, asked Trudeau what he would do to make sure Canadians have good-quality child care and early childhood education, and to ensure caregivers are well-paid.

On this, Trudeau fell back on a broad campaign pledge, a $20-billion social infrastructure fund he has said will be used for everything from child care to women’s shelters to cultural centres. He explained the federal government needs to coordinate with the provinces, which all have different needs. Then he finished his answer with something oddly Harper-esque: cheques for parents.

Related: What Trudeau has promised, has done—and still must do

“We’ve committed to bringing in a Canada Child Benefit that is significantly more generous than the monthly cheques that families get now,” Trudeau said. “Right now they’re taxable so at tax time [parents] are going to get dinged for the big cheques they received last summer. We’re not going to do that.”

It’s taken some time, but Trudeau has mastered the art of the political answer. He’s got the policies down pat and has stopped freelancing new ones on the fly. It turns out he’s learned a lot from his predecessor in Langevin. The political leader with the sunny ways is, after all, still a politician.