Justin Trudeau, NATO, and the problem with backseat ministering

The attacks in Paris raise questions about the prime minister's policies. But he should get a chance to answer them. 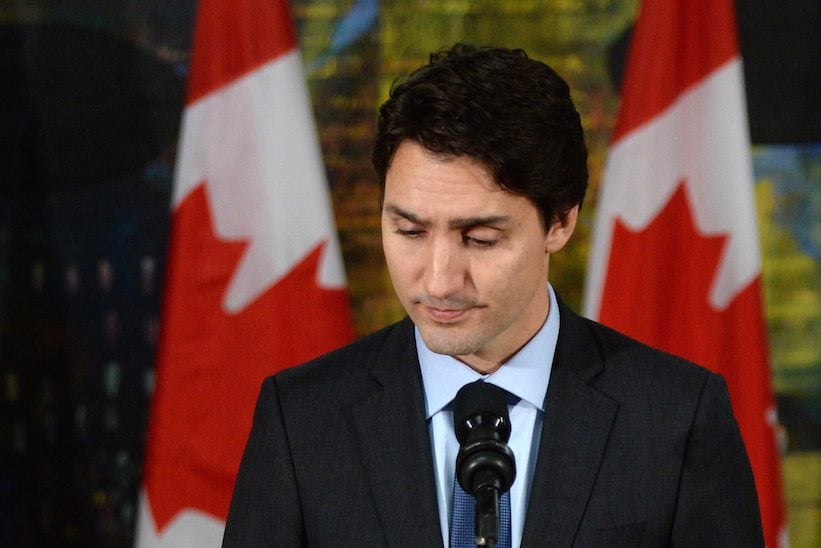 Canadian Prime Minister Justin Trudeau pauses as he addresses the media on the terrorist attacks in Paris prior to his departure for the G20 and APEC summits from Ottawa, Friday November 13, 2015. (Sean Kilpatrick/CP)

I thought the new Prime Minister looked rattled and tentative in his remarks at the Canadian government hangar at Ottawa Airport on Friday night. Judge for yourself here, in a video from the CBC.

If there was a night to be rattled and tentative, Friday was it. Dozens lay dead in Paris; it was still, nearly five hours after the first reports of shots and explosions, a chaotic and uncertain situation; much of Trudeau’s ambitious travel itinerary was now open to sudden revision.

And, of course, if the slaughter was perpetrated by people who had or claimed links to the so-called Islamic State terrorist group, then two of Trudeau’s biggest plans would face new questions: his intent to withdraw CF-18 fighters from action over Iraq and Syria, and his plan to bring 25,000 Syrian refugees to Canada by the New Year. Indeed, the only question Trudeau took at the airport before boarding his flight, from Global reporter Jacques Bourbeau, addressed both issues. Trudeau left wiggle room but indicated that for now, he doesn’t intend to change his plans.

Related: Why Islamic State is more dangerous than ever

By Saturday it was looking like the questions won’t go away. Two of the Paris killers were associated with the passports of Syrians registered as refugees in Greece earlier this year. (UPDATE, Sunday: There are serious questions about the authenticity of the passports. Le Monde‘s reporter on the story quotes Christiane Taubira, France’s justice minister, saying the passports are fake.) Poland’s new populist government announced it won’t accept any new refugees in the wake of the Paris tragedy. France’s prime minister, Manuel Valls, was saying “we must wipe out the enemies of the Republic.” Most significantly, both Valls and France’s president, François Hollande, called the attacks “an act of war.”

The apparent involvement of Syrians who entered Europe under the guise of refugees (UPDATE, Sunday: See my note above. There authenticity of the Syria connection is seriously challenged by French authorities – pw) casts doubt, by association, on millions of others. Poland’s announcement—which came so fast it was hard to shake the suspicion that the country’s new Law and Justice government was grateful for the pretext—contrasts with Trudeau’s plan. But the phrase “act of war,” pronounced by the leaders of one of Europe’s biggest governments, has particular significance.

Jason Kenney, the former defence minister, was quick to assert that Hollande’s statement “has implications for Canada under the NATO Treaty’s Article 5.” Article 5 is the big one: it declares that an attack on one member state is an attack on all, and will meet a response from all. There followed a tirade from Kenney, interrupted with heckling from yours truly, to the effect that from the moment Hollande said the word “war,” Canada had a treaty obligation to ditch Trudeau’s plan to withdraw the CF-18s.

To call Kenney’s reasoning shaky would be to insult Jell-O. First, as NATO’s own website explains, you don’t invoke Article 5 with incantations. You do so at a meeting of the alliance’s North Atlantic Council, and Article 5 has been invoked precisely once in the alliance’s 70 years: after 9/11.

Second, again using NATO’s own language, “Allies can provide any form of assistance they deem necessary to respond to the situation. This assistance is not necessarily military and depends on the material resources of each country. Each individual member determines how it will contribute.” If Article 5 were formally invoked, that would not confer any obligation on any member state to apply lethal violence in the Iraq-Syria theatre. As it happens, the Liberal government’s policy—announced a year ago, tested in an election three weeks ago, repeated in Trudeau’s mandate letter to his new defence minister—is not to drop everything and come home, it’s to “refocus … Canada’s efforts in the region on the training of local forces and humanitarian support.”

Once implemented — it hasn’t been yet; Canadian jets are, at last report, still carrying out raids against ISIS targets — Trudeau’s policy would bring Canada into line with the activities of such honest-to-gosh NATO members as Spain, Slovakia, Norway, Bulgaria, Poland, Croatia and Romania. Jim Stavridis, the former U.S. navy admiral who served as Supreme Allied Commander in Europe, dashed off an op-ed calling for NATO to attack ISIS. But even Stavridis called troop training — Trudeau’s avowed goal in the region — the “most important” project NATO could undertake if it gets involved. 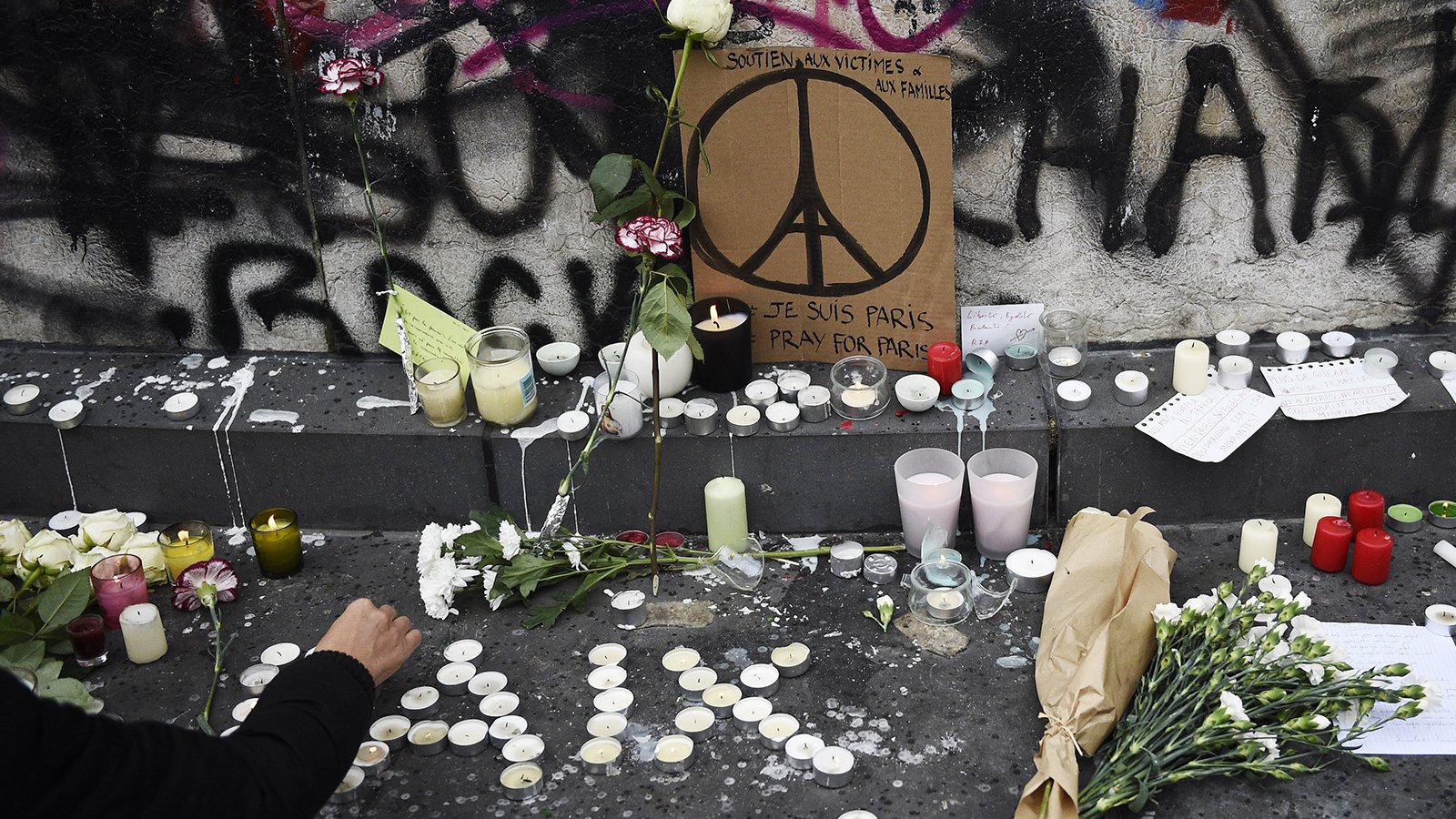 People lay flowers and light candles at the Place de la Republique square in Paris on November 14, 2015, following a series of coordinated attacks in and around Paris late on November 13. At least 128 people were killed in the Paris attacks on the evening of November 13, with 180 people injured, 80 of them seriously, police sources told AFP. (MARTIN BUREAU/AFP/Getty Images)

On all of these elements—speed and quantity of refugee welcome, armed intervention against Islamic State—it’s easy to imagine Trudeau’s plans changing in the Paris aftermath. But we just had an election on these precise questions, and the voters’ judgment was not vague. It’s disturbing to see a former defence minister and near-certain aspirant to the Conservative leadership invoke Canada’s most fundamental mutual-security alliance with little apparent understanding of what it says or means. (One presumes, of course, that Kenney knows precisely what he’s talking about, and therefore that he stands on quicksand with his claims, but that he figured a little weekend arm-waving wouldn’t hurt.)

I’m also a little tired of these Conservative party chicken hawks. If the fight against Islamic State is existential, then don’t send a measly six CF-18s. If procuring new fighters is fundamental to Canada’s security, procure some. If Canada doesn’t cut and run, then don’t end Jean Chrétien’s Afghanistan deployment just because Stephen Harper grew weary of the fight. If the way to stop refugees leaving Syria is to make Syria less of a hellhole, then don’t give Bashar al-Assad carte blanche.

If, on the other hand, you belonged to a government that ended the Afghanistan mission, deployed nothing more than cross words against Assad, and did not send more hardware to the region than Belgium and the Netherlands, then maybe do a little less chest-beating.

One more thing. For reasons that remain unexplained, except for Trudeau’s comment the day after the October election that he would draw down Canada’s military deployment in Iraq in a “responsible” way, the RCAF is still running bombing raids over there. Which means Trudeau’s policy has not yet been implemented in any way. Which means that right through Friday’s attack in Paris, Canada’s policy against Islamic State was Stephen Harper’s and Jason Kenney’s policy. That’s the sort of chain of events that might inspire some humility, in a party that professes to be remorseful about its “tone.”

None of this answers whether Trudeau should change his policy in the light of these gruesome new events. Elsewhere on our pages, colleague Petrou argues Trudeau really should. I’ve never been sure what the right way forward in that region might look like. But a new prime minister should at least get a chance to meet Canada’s allies in a string of high-stakes summits before the ex-ministers who ran the show up to now can feel free to backseat drive.