Justin Trudeau on dads taking care of babies, and other economic policy issues

John Geddes on the three points from the PM's Davos speech—on trade, technology, and, yes, newborns—that deserve a little unpacking 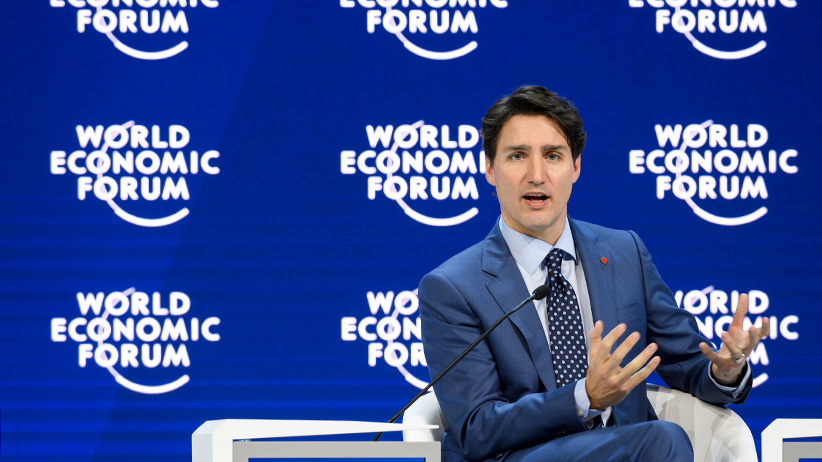 In early 2016, Justin Trudeau used a speech at the annual World Economic Forum as a way to introduce himself as Canada’s new Prime Minister to the assembled corporate heavyweights and government bigwigs, as well as the wonks and wannabes who cluster around them every year in Davos, Switzerland. This week, Trudeau is back at the mountain resort, updating his message and trying to burnish Canada’s image. Here’s quick look at three of the most interesting comments Trudeau made yesterday in his Davos speech:

Should dads be given a take-it-or-leave it incentive for taking time off with babies?

PMJT at Davos: “It’s time to take a serious look at parental leave and child care policies. We should be encouraging women—and men—to make the best decision for their family situation.”

That sounded pretty safe. Who’s against parents making the best decisions for their families? But Trudeau has said elsewhere that he’s actively considering a policy that could be quite controversial: offering a paternity leave benefit that would be paid only if the dad took time off to take care of a newborn child. Trudeau spoke less formally about this recently in Hamilton, Ont., on his national town-hall tour:

“We’ve moved forward on improving maternity leave, and even taking a look at mandatory paternity leave, which I think is a really, really interesting idea. I’m not entirely sure yet how it will absolutely work. They do it in some European countries, where the father has to take time off to spend with the newborn, or else that time can’t be taken by anyone… That message of making sure that there is more sharing of the responsibilities around child-rearing is something that we do have to do a better job of.”

What’s the track record on trade deals and the strength of the middle class?

PMJT at Davos: “Trade helps strengthen the middle class, but for it to work we must ensure that the benefits are shared with all our citizens, not just the few.”

Back when he was in opposition, Trudeau warned that the free-trade agenda of recent decades (along with other market-oriented economic policy) was jeopardized precisely because the middle class—more precisely, Canadians earning around the median—hadn’t seen their incomes grow in real terms since the late 1970s. So is it broadly true that “trade helps strengthen the middle class”? Looking at NAFTA, the U.S. Council on Foreign Relations says the verdict is mixed, especially considering the key question of the productivity of Canadian workers:

“Neither the worst fears of Canada’s trade opponents—that opening to trade would gut the country’s manufacturing sector—nor its highest hopes—that it would spark a rapid increase in productivity—came to pass. Canadian manufacturing employment held steady, but the ‘productivity gap’ between the Canadian and U.S. economies wasn’t closed: Canada’s labor productivity remains at 72 per cent of U.S. levels.”

Inserting computers into an upbeat historical narrative about technological change driving economic progress seems like boilerplate. Yet that claim is hotly debated by experts. Last spring, the Organization for Economic Cooperation and Development released a report called Going Digital: Making the Transformation Work for Growth and Well-Being, largely preoccupied with how new technology can be a positive force for ordinary people. The OECD says some companies are making new technologies work for them, but evidence doesn’t show that boon spreading convincingly through economies:

“With the broad-based slowdown in productivity growth that is affecting many OECD economies and beyond, the question is whether the current stage of the digital transformation can help strengthen productivity growth going forward…. Recent studies continue to point to the strong impacts of the current generation of [information and communications technologies] on productivity. But these impacts at the firm and industry level have not yet translated into visible impacts at the aggregate level.”