Politics Insider for Nov. 11: Trudeau gets stern with the premiers (but is it enough?), Remembrance Day marks a solemn anniversary and the feds are auctioning off a drug boat 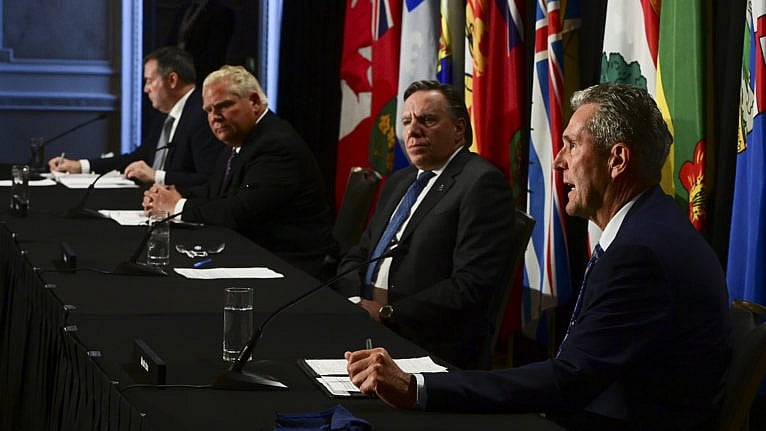 Prime Minister Justin Trudeau didn’t call anyone out specifically, but the PM did subtweet some of his provincial counterparts at a press conference yesterday. “I would hope that no leader in our country is easing public health vigilance because they feel pressure not to shut down businesses or slow down our economy,” he said. “I urge premiers and mayors to do the right thing. Act now to protect public health.” As the virus spreads in Quebec, Ontario, Manitoba and Alberta, the four premiers of those provinces have taken heat for mishandling the pandemic’s second wave.

A new Leger poll that tracks first minister approval ratings illustrates a gradual erosion of support almost across the board since March. But two premiers, Alberta’s Jason Kenney and Manitoba’s Brian Pallister, have dropped significantly—all the way to just 44 and 42 per cent approval, respectively, for COVID-19 response measures. Ontario’s Doug Ford hasn’t yet seen his support fall away, even as cases consistently hit new daily highs.

Time for a national response to COVID: Scott Gilmore, writing in Maclean’s, is exhausted by mixed messaging and buck-passing from one level of government to another. It’s the PM’s job to lead, he writes, so the PM should lead.

Why are we doing so badly? You don’t need a room full of epidemiologists to puzzle this out. Our Prime Minister mostly side-stepped responsibility and decided 10 different provincial premiers should manage a national pandemic. They in turn passed on responsibility to mayors and local health authorities. The result has been incompetence, chaos and death, with a Prime Minister who has decided it’s all someone else’s problem.

Depending on your preferred horse-race pollster, Trudeau’s Liberals are either statistically tied with Erin O’Toole‘s Tories or eight points ahead. Angus Reid, which has the parties closer than Leger, also measured a six-point uptick in O’Toole’s favourability rating (to 36 per cent) and a nine-point increase in his unfavourables (to 40 per cent). The Leger poll shows a slim two-point Bloc Québécois lead in Quebec over the Liberals (32-30).

One more poll: Cardus, a “faith-based think tank” in Ottawa, asked Angus Reid to take the nation’s temperature on medical assistance in dying. The pollster found that two-thirds of respondents “are concerned expanded MAiD will lead to people with mental health issues like depression choosing death rather than dealing with the underlying causes of their condition.” A similar proportion “fear expanded MAiD will lead to people with disabilities or those who are elderly feeling more pressure to choose death in order to avoid being a burden on others.”

Today, scaled-down Remembrance Day ceremonies will sweep across Canada and mark the 75th anniversary of the end of the Second World War. Governor General Julie Payette will preside over the ceremony at the National War Memorial in Ottawa. She’ll be joined by Debbie Sullivan, the 2020 National Silver Cross Mother. Sullivan’s son, Lt(N) Christopher Edward Saunders, was killed during a fire on board HMCS Chicoutimi in 2004. She will place a wreath at the cenotaph on behalf of all mothers who’ve lost children while they served in the Canadian Armed Forces.

Was he joking? Yesterday’s talker was all about U.S. Secretary of State Mike Pompeo, who told reporters he expects a “smooth transition to a second Trump administration” before smirking a little at his own comments. As the president continues to make unfounded claims of electoral fraud and instruct federal agencies to plan for another Trump budget, his envoy to the world appeared to make light of the disputed election result. Meanwhile, president-elect Joe Biden spoke to more world leaders. Was Pompeo joking? You be the judge.

This drug boat could be yours: Six years after the RCMP seized 30 kilograms of cocaine off the west coast of Vancouver Island, the feds are auctioning off the 20-metre MV Cedar Spirit that housed the narcotics until police responded to reports of “suspicious activity.” The opening bid is $225,000, and a 393-image photo gallery offers a detailed look aboard the yacht’s interior. It also comes with a dishwasher—and a BBQ. There was, apparently, a copy of a book named Confessions of a Boat Lover’s Wife, Or, Is a Marriage Like this Worth Saving? The fate of the yacht appears to have answered the titular question.