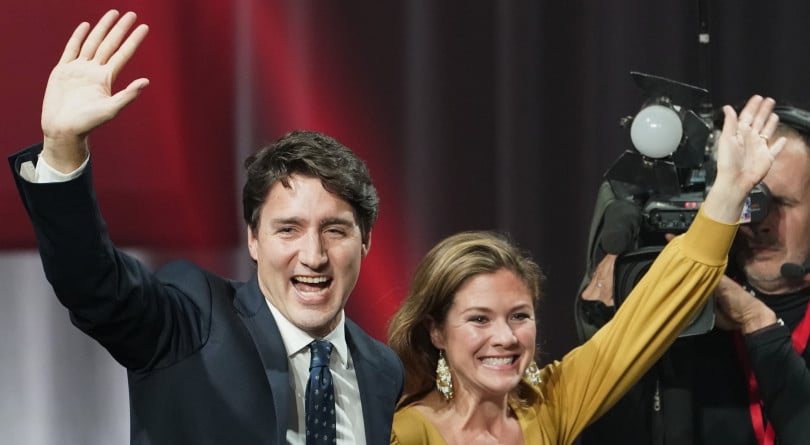 The theme of election night 2019 was expectations: Justin Trudeau exceeded them, Andrew Scheer failed to meet them.

With Trudeau’s clear minority victory the Prime Minister can continue to govern, so long as he maintains the confidence of the House. Yet Monday night’s results were also a rebuke of Trudeau’s handling of his first term, and with  Canada’s political map heavily divided — the separatist Bloc Quebecois has been re-invigorated, while the Liberals were completely shut out of Alberta and Saskatchewan by the Conservatives — the question now shifts to whether a newly-humbled Trudeau can bridge those divisions.

Relief instead of triumph: Liberals celebrated their muted victory at Montreal’s Palais des congrès and as Shannon Proudfoot writes, they met the results with “slightly hoarse exhalation of relief rather than a roar of triumph“:

To be sure, the crowd went predictably wild when the networks declared that the Liberals would get to keep governing, albeit in a weakened minority state. Soon after, chants of “Four more years” broke out, despite the fact that the result meant that kind of longevity would be a stretch. “‘Four more years’ seems so American,” a woman in the crowd commented to a man with her. “Yeah,” he agreed.

The deflated-balloon quality of this exchange, even on the night of a putative win, felt emblematic of the whole affair. Past midnight, Pablo Rodriguez—at dissolution of Parliament the minister of Canadian heritage, re-elected on Monday in Honoré-Mercier—took the podium as the warm-up act for Trudeau, and he began by bellowing, “How’s everybody?” It was the perfect question for the night—how do you find the proper emotional response to a chastening half-victory that could very well have been a well-deserved defeat, only four years after sweeping the country with a Camelot North updraft that made your opponents grind their teeth to stumps in frustration because they couldn’t compete? Read more››

Read Trudeau’s full post-election speech here: “Liberals know, like all Canadians know, that it is always possible to do better.”

This movie sucks: The mood was predictably glum as Conservatives gathered in Regina to absorb their defeat, writes Jason Markusoff:

Doors opened at Conservative HQ in Regina a half-hour before polls closed in central Canada, with the party far behind in early returns. Supporters shuffled into the hall quietly, like moviegoers entering the theatre after the previews had begun. They hoped the big screens gave them something, anything, to cheer for.

Not tonight. Not this year. As CTV became the first English network to declare Liberal victory, the Regina crowd watched another station to holler for their team leading in Maxime Bernier’s seat. A few minutes later, CBC called it, and as hologram Justin Trudeau strode onto the screen, the TVs switched over? to Global, the last network to declare for Justin Trudeau.
…
Reality gave the Conservative results-watching crew few reasons to raise aloft the “Scheer 2019” signs on their seats, or to don the free blue-and-white “C” hats on their chairs. Sure, they cheered and sign-wagged when Scheer won his Regina seat, or chanted “na na na na, hey hey, goodbye” when local Liberal veteran Ralph Goodale conceded. And Scheer’s two incoming Regina MPs addressed the crowd as feel-good warm-up acts to the Opposition leader. Some scenes were thrilling. For this audience, the movie sucked. Read more ››

Read Scheer’s full post-election speech here: “Tonight, Conservatives have put Justin Trudeau on notice. And Mr. Trudeau, when your government falls, Conservatives will be ready and we will win.”

Wait, what are we celebrating?: Jagmeet Singh danced into NDP election headquarters as if he’d won, and while New Democrats were in full celebration mode after Singh pulled their party back from the abyss, now the hard part begins, writes Adrienne Tanner:

Still, Singh’s supporters were hopeful. There wasn’t a person at his celebration at the Hilton Vancouver Metrotown who seemed to feel the campaign had failed. “Going into this campaign, expectations were very low,” Raj Sihota, the executive director of the B.C. NDP, acknowledged. There was some speculation the NDP might not even be able to hold onto party status. Singh delivered, she said. “He ran an energetic campaign and he inspired people. It’s a good base from which to build.” Read more ››

Now some results: You can see the final tallies here including a riding-by-riding breakdown, but the overall seat count was:

People’s Party leader Maxime Bernier was defeated in the Quebec riding of Beauce.

Jody Wilson-Raybould, who quit Trudeau’s cabinet and was then booted from caucus in relation to the SNC-Lavalin controversy, beat all the party candidates to become the independent MP for Vancouver Granville.

Jane Philpott, the other former cabinet minister Trudeau kicked out of the Liberal caucus over the matter was defeated as an independent candidate in the riding of Markham-Stouffville.

Other cabinet ministers who get to come back for another term: Chrystia Freeland, Catherine McKenna and Harjit Sajjan.

Unfulfilled promise: Maclean’s journalist Aaron Hutchins was at Philpott’s campaign party headquarters and writes that after enduring a loss, Jane Philpott wanted to be brave —  if not for herself, for the young women who looked up to her.

Check back with Macleans.ca throughout the day for more post-election coverage.