The PM riles the Baltics. But he also gets to make the rest of his case. 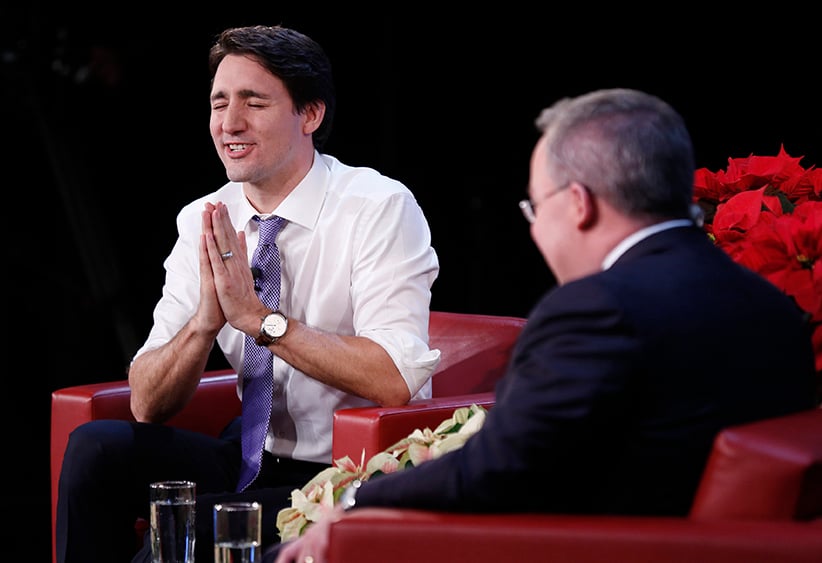 I swear we didn’t plan to do another Maclean’s political television show after that debate in August. That was exhausting. But it also taught Maclean’s to work more closely with several other tentacles of the Rogers corporate kraken — City, Omni, the radio stations and more — in pursuit of ambitious journalism. Once we’d built that capability, it was probably inevitable we’d use it again.

It just happened so quickly this time, is all. In interviews less than two weeks ago for an article on the Trudeau government’s operating style, I learned the new Prime Minister was interested in town-hall-style events in addition to his more traditional year-end interviews. We put together a proposal. His office agreed promptly. Canadians saw the result today.

Organizing the event with the Trudeau PMO was like pushing through a series of open doors. Town hall? Yes, came the prompt answer. Questions off the top from Chatelaine and L’actualité? You bet. Could we invite other news organizations? Sure thing. Scrum afterward? No, sorry, no scrum. But could we send a camera to wherever he’d be on Monday and shoot promotional video? Absolutely.

The 60-second version of that promotional video went viral on Monday night, retweeted thousands of times, as people in Pakistan and Japan, Turkey and Mexico (including, as far as I could tell, nearly the entire editorial staff of the Guardian) discovered this young Prime Minister quoting Cyrano de Bergerac and, uh, discussing his first pet. A lot of the commentary was amazed. Some was dismissive. The novelty effect won’t last forever, but it was fascinating to watch.

It was also in the promo video that Trudeau started to get into trouble in some circles, with his remark that picking a favourite Baltic country “isn’t a thing.” Boy, he must not have gone to university where I did. We used to stay up late into the night at Western, debating the merits of Lithuania vs. Latvia. I kid. But of course some viewers were sure he was asserting that the Baltic states themselves are not a thing, and the (surprisingly numerous) defenders of Baltic honour were quick to make themselves heard.

More trouble, of a sort, will follow his long answer at the actual event to a question about the exclusionary rhetoric of Donald Trump, the alarmingly lifelike windup toy that is running for the U.S. Republican presidential nomination. Trudeau’s answer mentioned the so-called Charter of Quebec Values the Parti Québécois ran on in 2014, and ended up calling Trump’s rhetoric ignorant. This will buy him trouble, in Quebec and perhaps from Trump, that he didn’t particularly need.

Now here’s the thing. The Baltic uprising and the (altogether more predictable) uproar from the PQ are a direct result of Trudeau talking about things he didn’t need to talk about. We just got done, as a country, with a prime minister who saw such uproars as a good reason not to talk. In his excellent book Harper’s Team, Tom Flanagan describes a few times when, as Opposition leader in 2002 and 2003, Harper made lame jokes that got him into days of hot water. He eventually decided he could no longer make jokes in public. He developed a reputation for humourlessness that baffled anyone who knew him well. Later he decided it was too dangerous for any Conservative candidate to speak without extensive briefing and vetting. Then, in power, any Canadian diplomat. Then any public servant.

By 2015, it had become kind of pathetic. Harper went longer without meeting the premiers, as a group, than any prime minister in 90 years. He wouldn’t meet Ontario’s premier until he had strong guarantees that nothing would be discussed and he’d have a hockey game to escape to. He used to have journalists over to 24 Sussex, always in one big group, always with their families, once in spring, once before Christmas. In his last year and a half in office he stopped doing that. Don’t cry for my lot, but in his last campaign, he ensured no human being would get into his campaign events without a prior invitation. Nobody heard him speak who was not already a committed Conservative supporter. He had long since stopped trying to persuade anyone.

That, in large part, is what brought Harper down, isn’t it? He was so careful not to hear a discouraging word or make an untoward remark that he had nothing to say and nothing he thought he needed to hear. Conservatives are left today with the disorienting sensation of having little to show for a decade in power because few Canadians have heard why any of it happened. Now, I’ve written two books about Harper that are often broadly complimentary to him, and I think they hold up well. But it always seemed to me that there was a substantial opportunity cost to all this battening down of hatches. We get a glimpse of it when we see the Conservatives’ interim leader, Rona Ambrose, and long-stymied Conservative MPs like Scott Reid making a strong contribution in the House of Commons. Multiply that by everybody who was kept from making the case, in anything longer than a few dozen inane words at a time, for Conservative ideas over a decade.

Meanwhile Justin Trudeau made the case for his ideas today in front of a live audience and a nation watching on TV and the Internet. Maybe one day his big mouth will get him into the kind of trouble he can’t get out of. In the meantime Canadians will have a decent idea what he’s on about. He seems comfortable with that allocation of risk and opportunity.