Prime Minister: 'Indigenous peoples have known for thousands of years how to care for our planet. The rest of us have a lot to learn.' 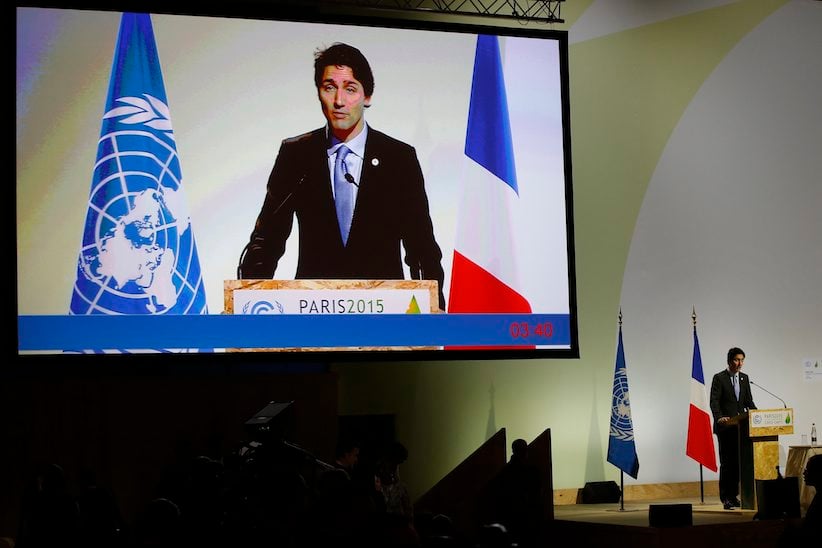 PARIS — Prime Minister Justin Trudeau travelled to Europe to tell the world that the fight against climate change starts at home.

Trudeau wrapped up a week-long run of European summitry — his second in less than 30 days since being sworn into office — with an address to the leaders’ plenary on the opening day of a UN-sponsored climate conference.

French President Francois Hollande, the host of the 21st climate conference, and other leaders painted the climate battle in existential terms for humankind, explicitly linking security issues and global warming in this terror-scarred city.

Trudeau focused on his own backyard.

“Indigenous peoples have known for thousands of years how to care for our planet,” he said. “The rest of us have a lot to learn. And no time to waste.”

Trudeau said national governments like his own also have a lot they can learn from cities, and from the provincial premiers who’ve accompanied him to these talks.

More than 150 countries are represented at the conference, known as COP21, and more than 180 jurisdictions made emissions-cutting pledges in advance of two weeks of final negotiations that formally began Monday.

Hollande, whose national capital was stricken earlier this month by its second deadly terror attack in 2015, portrayed the task of climate negotiators in vividly dire terms.

“I’m not choosing between the fight against terror and the fight against global climate change,” he said in his opening address after delegates observed a moment of silence for terrorism victims in France, Lebanon, Iraq, Tunisia and Mali.

“Because we must leave our children more than a planet free of terrorism…. We must leave them a viable planet.”

“Essentially what is at stake with this climate conference is peace,” said the French president.

The conference site, a sprawling airfield outside Paris, was a remarkable scene. More than one hundred country leaders and several thousand official delegates and journalists converged in the City of Lights just three weeks after terrorists killed 130 people in seven co-ordinated attacks on Nov. 13.

Related reading: What are the sticking points at the Paris summit?

“What greater rejection of those who would tear down our world than marshalling our best efforts to save it,” he told the morning plenary.

Trudeau had been asked last week about the nexus of climate and terror after UN secretary general Ban Ki-Moon raised the link at a news conference in Malta during a Commonwealth summit.

Trudeau said security and climate change have figured in every conversation he’s had with other world leaders, whether at the G20 in Turkey, the Asia-Pacific leaders summit in Manila, or last week in Malta — but added, “I don’t see a direct link there.”

At a news conference Monday on the conference site, Trudeau said the three-month election campaign this fall that propelled his Liberals to power showed him that Canadians are ready to pitch in on fighting climate change.

“But they want to know that what they’re doing fits into a bigger picture,” said Trudeau. “Because there is no point in bending over backwards if your neighbour or your government is not also doing its part to ensure that we all have the maximum impact together.”

Trudeau, who has acknowledged that past governments — including Liberals — have failed to meet emission-cutting targets, said there “can be no laggards.”

“Every single one of us can and should be much more conscious of the ways we can act to reduce our carbon footprint.”

Before returning to Ottawa on Monday night, and this week’s return of a new Parliament, the prime minister met with the premiers of B.C., Alberta, Saskatchewan, Ontario and Quebec in one last display of the group effort Canada intends to make on climate change.

It was the last of Trudeau’s frenetic networking, which included sitting down with the presidents of the European Union and European Commission, Israel’s Prime Minister Benjamin Netanyahu — where he accepted an invitation to visit Israel — and a brief address to an event hosted by the World Bank.

Trudeau announced in Malta that Canada will contribute $2.65 billion over five years to a climate adaptation and mitigation fund, and on Monday he added a pledge of $300 million to clean technology innovation as part of a 20-country project headlined by Hollande, Obama and Microsoft founder Bill Gates.

Canada also made a $30-million contribution towards a $250-million fund to help the world’s poorest countries adapt to immediate climate threats.