The Liberal leader on supporting Bill C-51, equality before the law and squaring personal views on women’s rights with party policy. 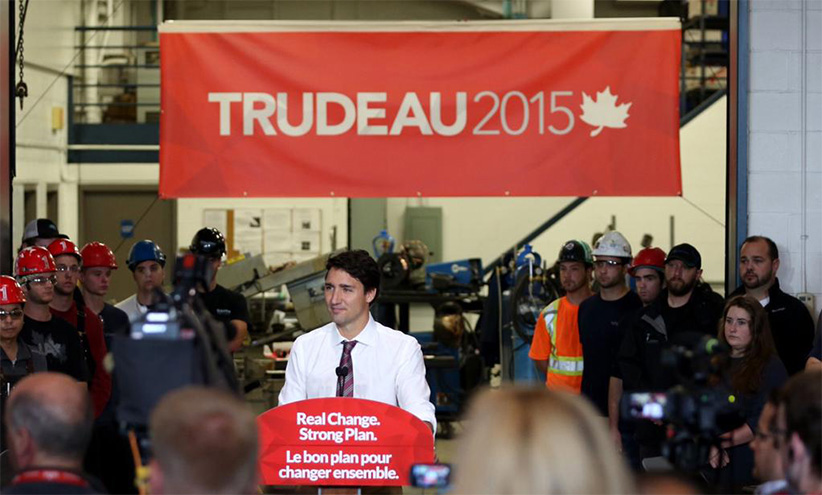 Up for Debate, a panel on gender justice and inequality set to take place on Monday, will not feature all the leaders; Stephen Harper declined to be interviewed for the event’s prerecorded Q&As. But in a series of one-on-one interviews, which first appeared at Chatelaine, Katrina Onstad and Rachel Giese spoke with four federal leaders—Stephen Harper, Thomas Mulcair, Justin Trudeau and Elizabeth May—to discuss women’s issues and beyond. Here, Justin Trudeau discusses his support for Bill C-51, equality before the law and squaring personal views on women’s rights with party policy.

When Justin Trudeau became the Liberal leader in the spring of 2013, on the heels of a devastating election defeat under Michael Ignatieff, it seemed like the party’s fortunes might turn. But despite his popularity among certain groups, Trudeau quickly became a target for critics who mocked his resume, his youthfulness and his enviable head of hair. We spoke to Trudeau on August 26, two days after a debate devoted to women’s issues was cancelled.

Every party is promising to help middle-class families. You say you want to overhaul the family benefits systems—why?

Take the current Universal Child Care Benefit. Those UCCB cheques that went out this summer, went out to every family in the country with children under the age of 18. My family qualified for about $3,000, even though we’re doing very well and didn’t need it. The Liberal plan is a progressive tax-free, monthly payment for families making under $200,000 a year, with lower-income families getting a larger payment.

You’ve supported religious rights, like Muslim women’s right to wear a niqab during citizenship ceremonies, but you’ve also insisted that everyone in the Liberal caucus must support abortion and same-sex marriage. How do you square those two stances?

It all comes back to that Oliver Wendell Holmes quote about how a person’s right to swing their arm stops at another person’s nose. So, when we are balancing a women’s right to do what she wants to her own body with a legislator’s right to impose restriction on women, it’s simple: if you want to stand for the Liberal Party, you have to be there to defend women’s rights. That doesn’t mean people can’t be against abortion in their personal views, but they can’t vote to limit women’s rights because of those views.

Speaking of rights, let’s talk about your support for the anti-terrorism legislation Bill C-51, which expanded the powers of police and CSIS without expanding oversight to protect privacy and civil liberties. Why did you vote for it?

There were elements of the bill that I believe increased security for Canadians, like better use of preventative arrest and better use of no-fly lists. There were also parts of that bill that didn’t go far enough to provide commensurate protection of rights and freedoms. Mr. Harper doesn’t seem to believe that there needs to be more protections of those rights and he’s wrong on that. On the other side, though, are detractors who opposed the bill who said that we’re suddenly going to become a police state. I think that’s a similar approach to Mr. Harper’s politics of fear. We managed to put forward amendments that make this bill less harmful. We’ve also committed to bring in proper oversight and sunset and review clauses.

That decision cost you support, though, and possibly votes. [One poll found that 77 percent of Liberal supporters were against it, as were three-quarters of those between the ages of 18 and 34.]

Politicians are constantly stuck between what is politically expedient and politically beneficial and what is the responsible or right thing to do. It’s a tension we all go through. I didn’t have to whip my caucus on this. We had a very serious, responsible conversation over this. The decision we made was to support an imperfect piece of legislation and to promise to review and repair the legislation if we form the government.

Crime has been a focus of the Conservative government, with a heavy emphasis on law and order. At the same time, there have been movements across the country critical of police for racial profiling, the use of force on people with mental illnesses, and a lack of action on violence against indigenous women. Given that most policing takes place at a local level, what role does the federal government have in addressing concerns about policing?

The first thing we have is the Charter of Rights of Freedoms and we need to make sure we are looking at federal crime legislation with a gender lens and a diversity lens. One of the examples of that, for me, is our marijuana policy. When my brother Michel was about 22 [a year before he died in a skiing accident], he got in a terrible car accident driving home from British Columbia. As part of the investigation of the wreckage, the cops found a Sucrets box in my brother’s car with maybe a half gram or gram of marijuana in it, and charged him. When he got back to Montreal, our father said, “Well, this won’t do” and he hired a good lawyer who was able to get my brother out of a criminal conviction that would have stayed with him the rest of his life. That’s where there is a fundamental inequality in the law, because an equivalent indigenous kid or a minority kid from the inner city or any kid whose parents couldn’t cough up the money for a lawyer would have been convicted for the same offence.

Related: Our primer on crime, one of our explainers of #elxn42’s big issues

Let me ask how your government might function. What’s your process for making decisions about policy and direction?

Well, quite frankly, it’s the style of leadership I learned from my father: My father gathered the most brilliant people he could find and challenged them to find real solutions. He watched them debate and disagree while they engaged in a serious pursuit of the best possible answer regardless of ideology. Some people have come to admire Stephen Harper’s style because he’s standing at the top of the pyramid —that’s not leadership to me. Leadership is inspiring extraordinary people to step up and serve their country.