Justin Trudeau to travel to Brussels to sign CETA

'This summit will mark a historic step in Canada-EU relations,' the PMO said 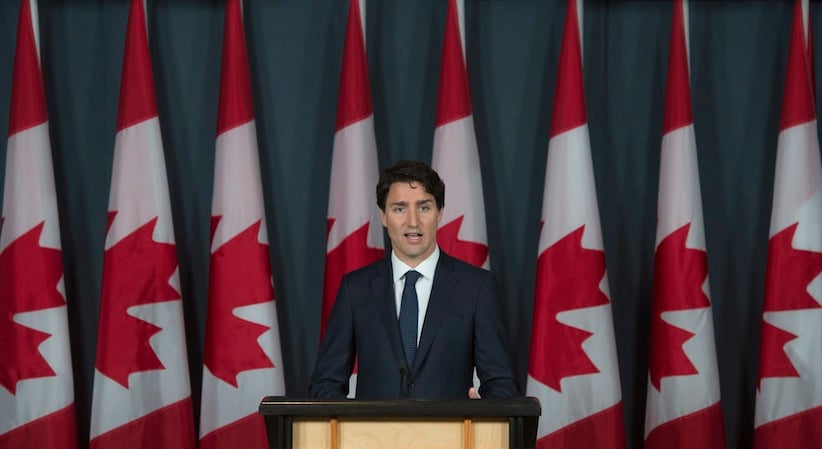 OTTAWA — Prime Minister Justin Trudeau will finally travel to Brussels this weekend to sign the Canada-EU free trade deal known as the Comprehensive Economic and Trade Agreement, or CETA.

Trudeau spoke Friday with European Council president Donald Tusk, who confirmed that the texts of the deal, along with a side agreement known as the Strategic Partnership Agreement, have been approved and are ready to be signed.

“President Tusk invited Prime Minister Trudeau to sign the CETA and the SPA on October 30, 2016, at the Canada-European Union (EU) Summit in Brussels,” the PMO said in a statement.

“The prime minister accepted the president’s invitation. This summit will mark a historic step in Canada-EU relations.”

Trudeau had initially expected to sign the deal in Brussels earlier this week, but the restive Belgian region of Wallonia put the brakes on that plan by standing in opposition to the controversial deal.

In recent weeks, the tiny French-speaking region of 3.5 million people opposed the deal’s investor-state dispute settlement mechanism, with the support of other European politicians and anti-trade activists.

An agreement Thursday give national and regional parliaments throughout Europe new powers over those controversial investor protection provisions, prompting warnings from some observers that the pact remains a fragile one.

A final obstacle was removed Friday when Wallonia officially voted to withdraw their opposition to the deal.

Wallonia held a veto over Belgium’s ability to support the deal, which requires the support of all 28 EU countries. But its parliament voted overwhelmingly to allow the Belgian national government to support the pact.

The Council of the European Union adopted a package of decisions on matters such as signing the agreement, its provisional application and requiring the European Parliament’s consent to conclude the deal.

They also agreed to a joint text with Canada that provides a “binding interpretation” of the terms of the pact on certain issues, according to a statement on the council’s website.

The Walloons dropped their opposition following an agreement Thursday with the Belgian government that gave national and regional parliaments throughout Europe new powers over controversial investor protection provisions.

That deal prompted warnings from some observers that the pact remains a fragile one.

Green party Leader Elizabeth May, long an opponent of the Canada-EU deal, urged Trudeau to stay home and host a debate on the agreement “so that Canadians understand the stakes of CETA, including its use of risky foreign investor provisions.”

“This agreement undermines environmental regulations and will favour multinational companies at the expense of Canadian sovereignty,” May said in a statement. “In the current form, we must continue to oppose the adoption of CETA.”

Politicians in Wallonia had argued that the proposed deal would undermine labour, environment and consumer standards and allow multinationals to crush local companies. Supporters said it would yield billions in added trade through customs and tariff cut.