Justin Trudeau, wondering what he has to lose

Paul Wells: Why is the PM staring down the opposition with an election threat? Maybe because as far as he's concerned, Parliament sucks. 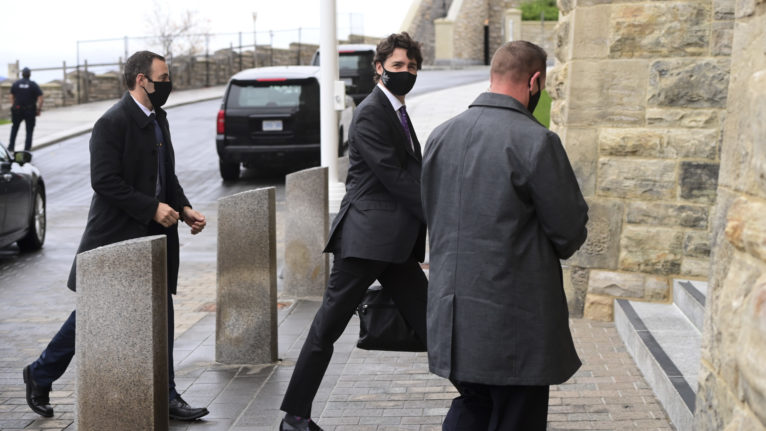 Trudeau arrives on Parliament Hill on Oct. 19, 2020, following a week-long break for the House of Commons (CP/Sean Kilpatrick)

While we wait to find out, on Wednesday, whether anyone blinks, I come bearing literary references.

“Both parties deprecated war,” Abraham Lincoln said in his Second Inaugural Address, “but one of them would make war rather than let the nation survive, and the other would accept war rather than let it perish, and the war came.” It’s a great sentence, as were many of Lincoln’s, and if you substitute “election” for “war” and “nation” for “prematurely purposeless and cranky Liberal government,” you too might see a parallel. But the substitutions kill the parallel. An election now would be a monumental pain in the butt, but it would hardly be a tragedy. And the issue around which the question of an election turns—does the opposition get to say the Liberals are a lousy government, or simply act on that assumption, as every opposition always does?—is hardly worth getting worked up over.

“As soon as war is declared, there’s no holding the poets back,” Jean Giraudoux wrote in his haunting 1935 play La Guerre de Troie n’aura pas lieu, which the Prime Minister may have encountered as a student at Collège Brébeuf. “A rhyme is still the best parade drum.” Also a bit overblown for our purposes, but Trudeau did seem enchanted by the siren song of battle as he took questions from Erin O’Toole.

The opposition leader wondered “who or what” the government is “covering up” with its election threats. The PM responded with election threats—phrased so broadly that I’m not sure it’s possible for any opposition to say anything without triggering the formidable eagerness of this government to get dragged, all kicking and screaming, into an election.

“Mr. Speaker, with what the leader of the opposition said this morning, with the motion he put forward in his own name, and even with the question he is just asking, he is demonstrating clearly that he has lost confidence in the government’s ability to manage this pandemic.” Now, he said, all the opposition had left to do was to express its contempt in a vote, and then off we’d go to an election.

On its face, this was an epically thin-skinned response. “You’re covering up” is, after all, as common a greeting in Ottawa as “Good morning,” and normally people don’t hurl themselves off the nearest cliff in response.

Unless, of course, they expect they’ll enjoy the view on the way down.

Here we begin to understand the Prime Minister’s serenity. It’s not always the case that embattled minority governments go looking for confidence tests in votes where the opposition intends none. In fact, the last time the embattled minority was Liberal, under Paul Martin, the tendency ran entirely the other way: Martin brazenly ignored a confidence vote that was designated and won by a united opposition.

Stack up the semantics as high as you want, the only difference is that in 2005 Paul Martin feared an election—and in 2020 Justin Trudeau doesn’t. Or at least, not more than he fears several more months of a Parliament in which MPs who aren’t Liberals can say whatever they want about him.

This government is eternally fascinated by whatever just happened. Remember nine weeks ago, when the whole town was on battle stations because Mark Carney had picked up his phone? Remember “build back better?” And what just happened, like just a minute ago, is that two minority provincial governments called snap elections and paid no discernible price.

In New Brunswick, Conservative Premier Blaine Higgs delivered a frankly pretty gross ultimatum to his opposition parties, which might be summarized as, “Promise you’ll treat me as though I had a majority, or I’ll call an election and go get one.” They told him to pound sand, he called his election, and voters handed him the majority he wanted. Because opportunism in politics is usually rewarded. That’s why they call it opportunism. In British Columbia, it’s tightening just enough to make things interesting, but even though he has an even worse poker face than Higgs, John Horgan still bids fair to benefit from his own unprovoked early election.

To Trudeau’s eyes, this is a much more promising set of precedents than, say, the most recent elections in Ontario and Quebec, which came at the appointed hour and saw two different Liberal parties fall to their lowest share of the popular vote since Confederation.

But perhaps the most compelling case for Trudeau against staying in Parliament is that as far as he’s concerned, Parliament sucks.

I mean this two ways. First it’s a dangerous place. The opposition has the majority in committees, and no Liberal filibuster can outlast the determination of their opponents to go fishing for embarrassing information. Of course Trudeau used to claim to welcome their inquiries. On Aug. 18, shortly after he’d fired his finance minister and asked his Governor General to prorogue Parliament for assorted reasons, none credible, Trudeau gave a news conference in which he celebrated the importance of a Parliament he would now not have to face for several weeks. “Of course the members of the opposition will have every opportunity… to ask the questions they want,” he said. And, “Certainly opposition MPs will continue to ask their questions.” And, my favourite, “When Parliament resumes in the fall there will be ample opportunities to continue to ask whatever questions committees or members want to continue to do.”

Hypotheticals are generally more appealing than reality, a rule I have come to think of as Justin Trudeau’s First Law of Electoral Reform. It was easy to admire the right of opposition MPs to ask questions when that right lay two months in the future. Now it’s all around him, and it hurts his feelings and may yet get him into still more trouble.

The other way Parliament sucks, if you’re a Liberal, is that it is such a reliable buzz kill. When they’re among themselves, as they have usually been since March, they can come up with new income support programs and wage subsidies and synonyms for giving people money. They can savour the fatigue that comes from undeniably working hard, and tell themselves the coronavirus crisis would be worse without them. Then they have to face MPs from other parties, as well as reporters, who taken as a group hardly ever thank them.

It’s jarring, and not only for Trudeau and his team. Stephen McNeil, Nova Scotia’s premier, announced he’ll quit after, I’m told by Halifax colleagues, being baffled for weeks at the lack of gratitude from political Halifax for his handling of the COVID-19 crisis. Ontario’s minister for long-term care walked out of a news conference on Monday rather than take a question from a reporter who’d had the gall to quote her correctly. Quebec’s premier has developed a weird fixation on a reporter who keeps saying the outbreak is going badly in Quebec, which is not only true, it’s obvious. We’re living through a difficult and disorienting time, all of us, and in political leaders from many parties in many contexts it seems to translate into easily hurt feelings.

Whatever the reason, Justin Trudeau has seemed edgy for months, his behaviour somewhere close to astonishing. He fired his finance minister after letting his staff wreck the man’s reputation. He prorogued Parliament with promises of a bold new plan that never materialized, which, given the track record of this government’s bold plans, is probably for the best. He’s happy to spend as long as he doesn’t have to budget. He welcomes questions until he hears them. He’s gambling with his political fate, but is it really gambling if you’re likely to win and you wouldn’t mind losing?