Paul Wells: The February crisis presented the Prime Minister with the most challenging test of his career—and it did not at all come as a surprise 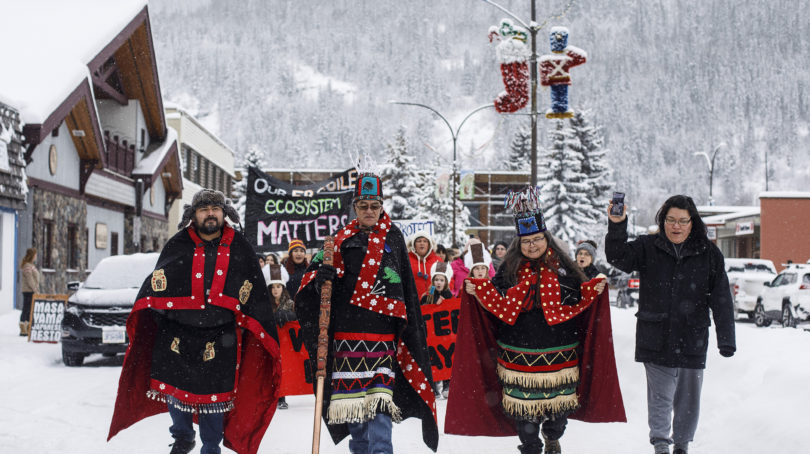 This has been coming all along. The crisis, or interlocked series of crises, that swallowed up Ottawa’s February was made of issues Justin Trudeau has talked about for most of a decade. He has been trying to build a grand bargain on energy, the environment and Indigenous reconciliation for as long as he has been wanting to be Canada’s prime minister. It was always going to be hard, but there is something satisfying in watching a man face a test he wanted and saw coming.

It’s also a relief. Until now, most times Trudeau has been in trouble, it was over some mess that was peripheral to his government’s action and attributable to character traits the rest of us would rather not have to think about.

So the ethics commissioner had to spend a year investigating Trudeau’s secret family vacation on the Aga Khan’s private island because, apparently, Trudeau likes to feel liked. The Prime Minister’s India trip imploded because of odd wardrobe choices and loosey-goosey scheduling. The Liberals’ re-election campaign became a nail-biter because Trudeau was revealed to have spent one-third of his life compulsively blacking his face for social occasions.

Even the SNC-Lavalin controversy, though it raised serious questions of criminal trial procedure and the chain of command, was esoteric to many Canadians in its substance and fuelled, at least in part, by the surprising news that this gregarious-seeming Prime Minister was only sometimes willing to listen to colleagues or able to say comprehensible things to them.

This time, though, it’s grown-up trouble.

The Coastal GasLink natural-gas pipeline is, in many ways, more benign than any conceivable diluted bitumen pipeline. If it can’t get built, not a lot of energy infrastructure can get built in this country. 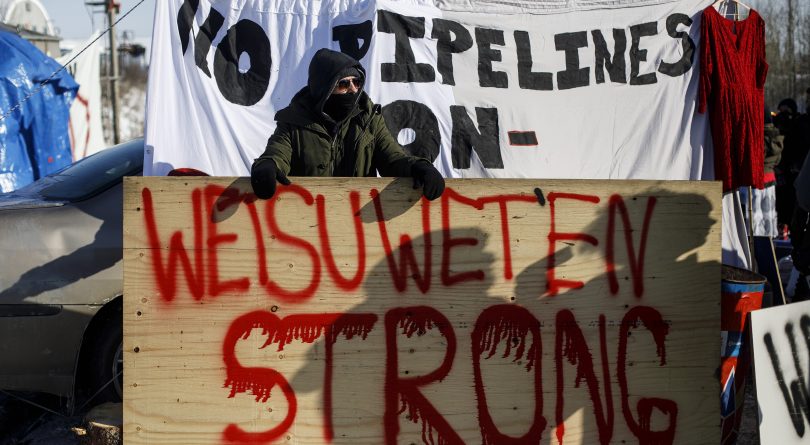 The Wet’suwet’en hereditary chiefs who oppose the project, and their concentric rings of sympathizers and supporters, are the sort of opposition that could spring up against any development project. If they have a veto, anyone does. But if they don’t, what in concrete terms is reconciliation supposed to mean?

The Teck Frontier oil-sands mine project, whose proponent withdrew an application for government approval after weeks of Wet’suwet’en-inspired blockades, threw another test onto the pile. If this mine can’t get built, is any new development in the oil sands possible?

The nature of these tests cannot have come as a surprise to Trudeau. In the first week of his campaign for the Liberal leadership, in October 2012, he visited a Sikh seniors’ centre in Calgary. “I promise I will never use the wealth of the West as a wedge to gain votes in the East,” he said. “It is wrong to use our natural wealth to divide Canadians against one another.” What’s more, he said, “There’s not a country in the world that would find 170 billion barrels of oil under the ground and leave them there.”

READ MORE: The outsized meaning of the Frontier oil sands mine

A year later, as the newly minted leader of the third-place Liberal party, he came back to Calgary to reassure nervous oil-igarchs at the Petroleum Club. “This place is important: Calgary, Alberta, and all of Western Canada,” he said. “It’s important now, and it will be even more important in the future—our shared future. Those of us who aspire to positions of national leadership need to get that, or we will never truly be national leaders.”

Stephen Harper “should have helped industry build partnerships with First Nations and environmental organizations,” Trudeau chided, because “governments may be able to issue permits, but only communities can grant permission.”

It took no great prescience to see these issues looming. The Harper government’s inability to get major pipelines approved was a growing preoccupation from 2011 onward.

Jim Prentice had already resigned as Harper’s environment minister when he wrote, in June 2012, that the thicket of questions around West Coast pipelines, tanker traffic and Indigenous consent “may well be the most difficult public policy questions in Canada today.” Those questions, he warned, “cannot be resolved by regulatory fiat—they require negotiation.” And getting a project approved would always be easier than getting it built, he said. “The real risk is not regulatory rejection but regulatory approval, undermined by subsequent legal challenges and the absence of ‘social licence’ to operate.”

Within months, the Idle No More protests of 2012-13 would demonstrate for an entire country what social licence looks like when it’s withdrawn. Harper’s cautious response—after weeks, he met with Indigenous leaders and accepted that they meet the Governor General, too—was streets removed from the cheap bravado of this year’s candidates to succeed him as Conservative leader.

I took this stroll down memory lane because, while it’s possible to criticize any of today’s governments for their handling of the February mess, it’s really hard to blame today’s leaders, alone, for creating it. It was a global crash in oil prices that ensured Jim Prentice would lose the 2015 Alberta election. It was Harper’s 2008 apology in Parliament for Indigenous residential schools that set in motion a process—dubbed Truth and Reconciliation, and guess which one will take longer—that helps explain Indigenous grief and anger.

RELATED: Idle No More, an exercise in fleeting infamy

If Harper’s Conservatives had won the 2015 and 2019 elections, or if Tom Mulcair’s NDP had, their government would be battling the same nexus of depressed prices and heightened expectations around and around the eternal energy-environment-Indigenous triangle.

None of which excuses the extent to which Trudeau’s own handling of the February crisis resembles professional malpractice. He cancelled a trip to a leaders’ summit in Barbados to huddle with an ad-hoc cabinet committee, the Incident Response Group, and update Canadians in Parliament.

His statement to the House of Commons was worse than useless. He began by making a show of understanding Canadians’ emotions. People “are troubled,” they “are asking what lies ahead,” they “know that these protests are serious,” he said. “So do I.”

That was weird. Could he do more of that?

You bet. “On all sides, people are upset and frustrated,” he said. “I get it.”

Hoo boy. Next came the contradictions. “It is past time for this situation to be resolved,” Trudeau said. But “we are not asking that [Indigenous leaders] stop standing up for their communities.” That would happen three days later. “We also need Canadians to show both resolve and collaboration,” he said, without explaining what showing resolve and collaboration would look like. “Everyone has a stake in getting this right,” he said, offering no hints about what getting it right would look like.

As soon as Trudeau stopped talking, Andrew Scheer, who has already been shamed by his fellow Conservatives into resigning as their leader, set about to steal Trudeau’s thunder with a grim, belligerent speech calling for the arrest of “a small group of radical activists.” This gave Trudeau a chance to ostracize Scheer from a party leaders’ meeting before, three days later, beginning to appropriate Scheer’s speech as handy crisis-management advice.

But Scheer isn’t the prime minister. Trudeau is, in theory. On this crisis of substance as on all his earlier crises of style, Trudeau favours a kind of stultifying drone that mimics the effect of air freshener, smothering unpleasant odours without finding or addressing their cause.

“There are debates about the future livelihoods of our children, the future of our environment, our relations with countries around the world and our positioning on things that are fundamental at a time of anxiety,” he told the Commons. “The place for these debates is here in this House.” Great. When does that start?

Teck’s withdrawal of its Frontier mine proposal offers a glimmer of a way forward. It was an odd project to stand as a test of anything, unsound financially, friendless in the industry. “There is uncertainty that it will be commercially viable to produce any portion of the resources,” the company wrote in its 2016 annual report. The sentence was so plainly true that the company repeated it, verbatim, in its 2018 report.

But Teck’s president, Don Lindsay, wasn’t wrong when he wrote this to Jonathan Wilkinson, the federal environment minister: “The promise of Canada’s potential will not be realized until governments can reach agreement around how climate policy considerations will be addressed in the context of future responsible energy sector development.”

Trudeau is correct to see in that sentence a rebuke to the anti-carbon tax coalition Scheer sought to lead a year ago and refuses to mourn. But saying “I told you so” isn’t governing. The 2019 election handed the forces of climate activism a big victory. There are days when it’s obvious that Jason Kenney understands that. But the strangely tentative federalism Trudeau has practised to date—phone calls, talking points, lonely expeditions by Chrystia Freeland that never seem to lead to anything—risks blowing that advantage. This Prime Minister actually understood the challenge of his career as early as 2013. I bet he thought that if he ever got the chance, he’d be bolder in tackling it.

This article appears in print in the April 2020 issue of Maclean’s magazine with the headline, “Justin Trudeau’s test.” Subscribe to the monthly print magazine here.