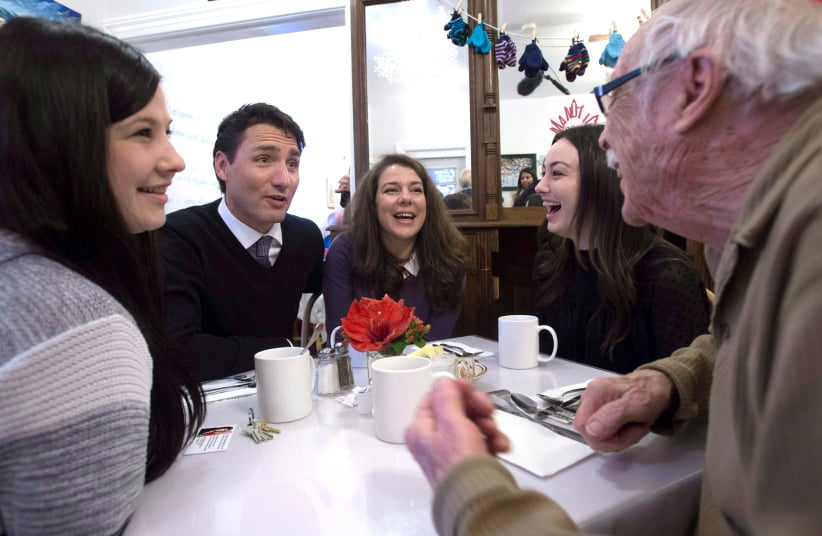 Before Justin Trudeau’s transparency blow-up, the first day of his taxpayer-funded, cross-country transparency tour was going swimmingly—for the most part. Sure, the exercise is a photo op. Perhaps, as alleged, it’s an opportunity to cultivate Liberal party donors. Yet if attention can possibly remain on those Canadians who don’t otherwise have a public voice being given an opportunity to raise their priorities and concerns, there’s value in the exercise. If today is any indication, that won’t be the case.

Trudeau’s itinerary as a middle-class champion—he’s skipping Davos to enjoy double-doubles with the hoi polloi—began with early morning stops in small-town Ontario coffee shops and bakeries. He then travelled to Kingston to “listen” to Canadians, an exercise that took the form of  fielding questions for an hour in the city hall’s lovely rotunda. The crowd of 250—old, young, mostly white, peppered with Liberal party members—bristled with Canadian politesse. Trudeau, outfitted a crisp white shirt, grey tie, and dark trousers, received a standing ovation entering and exiting, as people flocked for a photo. Many questions were prefaced by thank-yous. Mention of his father was met with applause. There was no veering into the issues that animated media and government critics—cash-for-access fundraising or the Prime Minister’s recent holiday on the private island of the billionaire Aga Khan. Nor did anyone allude to Jane Fonda, who travelled to Edmonton this week to blast the PM; he “betrayed” his climate-change promises, the actress said, before concluding that “the lesson is we shouldn’t be fooled by good-looking Liberals.” When a man in Kingston stood up to protest pipelines, the crowd shouted at him to “sit down.” “Sir, I am listening,” Trudeau told him. “We are going to try to keep this as respectful as possible.”

Yet anger, frustration, even heartbreak underlined many of the questions. Two furious government employees challenged the PM on the Phoenix payment debacle that thrust many workers into dire circumstances. (Trudeau said he found it “unacceptable” and promised to “work very hard and we’ll make sure we settle this challenge.”)  It isn’t lost that Trudeau’s last highly public visit to Kingston was to attend the final Tragically Hip concert last August; Gord Downie give him a shout-out from the stage: “Well, you know, Prime Minister Trudeau’s got me, his work with First Nations. He’s got everybody. He’s going to take us where we need to go.” Not everyone in today’s crowd was so confident. A self-identified First Nations woman had a gift for Trudeau (“Meegwetch,” he said while receiving it), then cried when asking him what he was doing about undrinkable water on reserves. Trudeau’s answer, couched in inspirational lingo, was vague: “We need to do right by this land which gives us so much and our responsibility to be stewards for future generations,” he said.

By question four, Trudeau’s answering formula was clear: gratitude for the questioner’s passion; identifying the importance of the subject, for him, his government, and for Canadians; itemization of the progress on the issue made to date, often supported by numbers; promises that he “looked forward” to dealing with it in the future.

Once observed, it was impossible to unsee. One woman was in tears questioning the government’s promise to restore lifetime disability benefits for veterans. “Despite what you promised, you resumed the previous government’s fight by hiring the lawyer they hired,” she said to Trudeau. “When are you going to be restoring?” Trudeau cleaved to the formula, ending with how it was vital the country “care for our best and brightest.” “You didn’t answer my question,” she said. By then, though, the Prime Minister was on to the next question.

The anodyne format also betrayed the important issues raised, which ranged from a plea for pharmacare to restoring the prison farms in Kingston shut down by Stephen Harper’s government. A transgender woman, a former member of the Canadian military, expressed concern about the safety of incarcerated trans women. Trudeau, to his credit, said that although he saw himself as a LGBTQ advocate, he was not familiar with the issue. Then there was a little girl named Eileen who started by saying that she was “very proud to be Canadian and to have you for a as a Prime Minister,” before telling the story of her sister born in the U.S. Her sister’s disabilities meant she would not be able to stay in Canada. She asked Trudeau: What will you do? “We’ll make sure we look closely at that file,” he said.

Trudeau is better on the road than in the House. He’s “saleable,” as a Liberal insider put it. He has a way of igniting a room, of making his audience feel self-righteous, as he did today when praising Canadians for embracing Syrian refugees. Trudeau, who goes breathless when tense, is funny when relaxed. When a man thanked him for coming out to mingle with the “unwashed masses,” Trudeau joked: “Leave everyone else out of your personal hygiene.” Another woman asked him how he got stains out of his tie. A mix of soda-and-salt, dry cleaning, and his wife editing his closets, he answered.

A surprising amount of ground was covered over the hour, including Trudeau admitting his bias to a ranked-ballot system, to the disappointment of a longtime Liberal supporter who championed “made-in-Canada proportional representation.” When asked why the 2015 budget “failed to phase out fossil-fuel subsidies,” Trudeau answered: “Great question,” before moving sideways: “We can no longer make the choice between economy and environment,” he began before giving a shout-out to Rachel Notley for putting “an absolute cap on emissions from oil sands.”

The last question was about the dire problem of human trafficking. Trudeau called it “horrific,” sharing that his wife was very much engaged in the issue, as was Justice Minister Jody Wilson-Raybould. Anything more was unclear.

A small, far less merciful press scrum followed. Trudeau, who’d changed into casual grey pants and a V-neck before his next stop in Napanee, stood before Canadian flags and a dozen or so random Canadians culled from the town hall. As the evening’s news reports indicate, the headline was Trudeau’s confirmation of taking a private aircraft—a helicopter—to the Aga Khan’s island without advising the ethics commissioner, a violation of the Conflict of Interest Act. Here too, he stuck with the formula: “I look forward to answering questions from the ethics commissioner,” he said, an answer that was clearly less than transparent. If today is any indication, Justin Trudeau’s transparency tour is destined to reveal more than anyone expected.