Justin Trudeau's money pit, and those working hard to join it 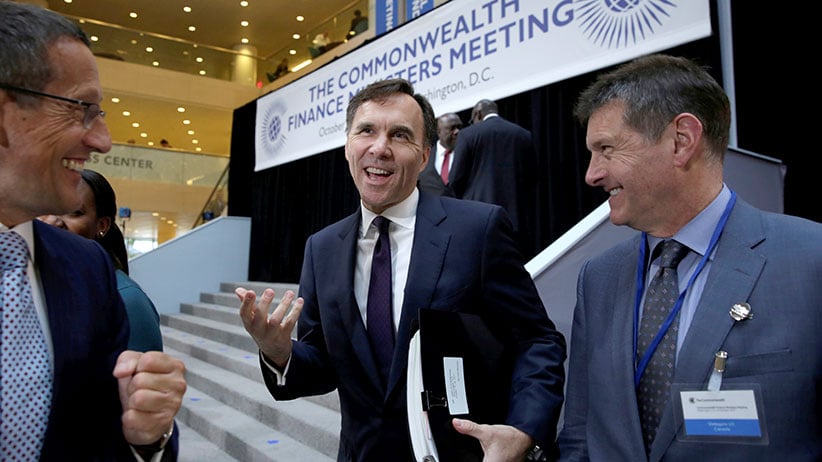 Come on, be fair now: Who among us hasn’t forgotten a villa in France, and the tax-dodging shell company we set up in our own name to manage it? Bill Morneau’s a square gee, a straight shooter, and if two years of talking about the middle class! and those working! hard! to join it! didn’t jog hazy sun-drenched memories of le beau paysage provençal, well, let he who is without early administrative confusion cast the first stone.

Now the Trudeau government is in a bit of a pickle, because on Monday Morneau, who apparently still expects to be the finance minister by then, will meet a hastily-convened caucus of Liberal MPs to announce the terms of  his retreat from the battle for tax fairness. This is problematic, because while the Liberal caucus is definitely the one likeliest to contain MPs with perfectly legal tax-sheltered villas in Provence, not all of them are blessed in precisely that way. And some of the more plain-folks Liberals may wonder what, at this stage, still makes Morneau the ideal standard-bearer for the tax fairness crusade, such as it is. Can they rally behind his common-guy aura? His debating skill? His straight talk? His attention to detail? Uh-oh.

Suddenly everything that hurts the Liberals most is happening on terrain that Justin Trudeau sought, announced and has defended since long before he became prime minister: the mythical fight for the middle class against callous governments and greedy plutocrats.

Go back to Trudeau’s canonical February 2014 speech to the Liberal convention in Montreal. “To wealthier Canadians, I say this: the growth we have seen over the past three decades has been the product of a broadly supported agenda,” he said then. “The original promise of that agenda was that everyone would share in the prosperity that it creates. That hasn’t happened… If we don’t fix it, the middle class will stop supporting a growth agenda.”

Trudeau views Donald Trump as the physical expression of withdrawn middle-class support for a growth agenda. The reason Bill Morneau repeats his incantations to the middle class! and those working! hard! to join it! every time he rises in the House of Commons is because Trudeau has long believed a government is either on the right side of that fundamental issue or it will not long remain in government. And the Liberals did big things early to ensure they will head into another election with interesting things to say about defending the middle class: on child benefits, on broad-based tax relief, on pensions.

But a government that spends $212,000 designing the cover of a budget document isn’t on the side of the little guy. A government that needs several days to decide it won’t tax employee benefits isn’t helping itself. A government led by a guy who vacations with the Aga Khan and then needs to be cornered into admitting it is sending serious mixed messages about who’s first in its hearts. And a government that’s after your doctor’s tax savings but is OK with Bill Morneau’s just might be clumsy enough to make you feel more sympathetic toward doctors.

At the heart of the government’s current confusion is Justin Trudeau’s peculiar relationship with large concentrations of money. You can define just about every Canadian prime minister in part through their relationship to money. Stephen Harper distrusted capital, was as immune to its attractions as anyone can be, and it helped him ride a populist instinct for years after his opponents should have realized he was far removed from the stereotypical Bay Street fat-cat Tory. Paul Martin was thigh-deep in Catholic guilt over his own wealth. Jean Chrétien was efficiently Janus-faced, smalltown populist on one hand, wired into the Desmarais billions on the other.

Trudeau’s harder to define, but there is something in him that views the very rich as inherently virtuous, or at least as so full of possibility that they must be treated as synonymous with virtue. Hence Davos. Hence the Microsoft CEO Summit and the Dock (Un)Conference, a Muskoka retreat where Trudeau met executives from GE and Facebook and Air Canada. Hence the 2016 meeting at Toronto’s opulent Shangri-La Hotel where he presented a slide deck—developed in collaboration with New York’s BlackRock investment firm—to representatives of the world’s most deeply-pocketed sovereign wealth funds, a few hundred billion in every chair in the room. And the cash-for-access fundraiser with the Chinese billionaires.

Everyone had a good chuckle when the Prime Minister justified the meeting with the rich Chinese guys as a part of his agenda to advance the interests of the mythical working class, but in his mind that’s precisely what he was doing. He wants to attract investment to Canada. He wants to do it in numbers that trail majestic trains of zeros. He can’t get that by schlepping down to Tim Horton’s and shaking the hands of regular folk. He might by schlepping down to Seattle to shake the hands of jillionaires. The prime minister’s full time critics view his dalliances with money as proof that he is merely starstruck; he is as certain that there is strategy in every mountain resort conference.

But if you keep making a face your mouth freezes that way, and the more time Trudeau spends chasing billions, the less attention his government devotes to mere millions—or to mere villas in France. There are dangers here: “white elephants and corruption,” I wrote 14 months ago. A few weeks later I added a third: “That this government will no longer seem populated by the sort of people most Canadians ever get to meet or know.”

The latest danger is a kind of socio-economic targeting error. The incorporated-business tax mess is a lot of things, but to the extent it was designed to reinforce the sense of fairness among the many who are tired of the depredations of the few, it was peculiar in its selection of the “few.” It’s true that if you’re incorporating and sprinkling and using all the other tricks Morneau targeted to keep your tax bill low, you’re almost certainly making more money than the average Canadian. But you’re probably not stinking rich, either. You’re probably making more than $200,000 and less than a few million. Which is an odd choice of target, because there really are fat cats out there, and by and large the Trudeau government is exquisitely solicitous of their care, feeding and comfort.

Chrystia Freeland famously wrote a book called Plutocrats. She was introduced into the Liberal party, when she first appeared as a candidate for the 2015 election, as the kind of person who spoke the language of fairness between the very rich and the rest of us. Her book opens with a fabulous vignette, the “coming-out party” for America’s plutocracy, the day of the $31 billion IPO for the Blackstone private equity firm. One of the company’s leaders, Pete Peterson, earned $1.88 billion on the day, which is handy because he needed to pay the bills for a party for his daughter Holly at New York’s Four Seasons Hotel. Holly paraphrased the dinner conversation: “If you’re going to have four houses, and you’re going to run four houses, it’s like you start spending some money.”

This is the government that got elected on a promise to go hunting after plutocrats. Somehow it keeps missing them. That’s becoming a serious political problem for that government. One wonders how long it will be before Justin Trudeau notices, but who’s going to tell him? Bill Morneau?