Forget the parades on the White House lawn. Never mind the gift of all-weather boots for the White House dogs, Sunny and Bo. Banish from your thoughts, if you can, please, for just a moment, the picturesque antics of little Hadrien Trudeau, although I have a sneaking suspicion my boss has already decided to put him on our next cover. Ignore the hockey jokes—my God, the interminable stream of hockey jokes—from a Chicago President whose many strengths have never included reaching for the subtle punchline when the obvious one was not yet quite worn down to a nub.

There was, in short, plenty of pageantry when Justin Trudeau’s family met Barack Obama’s family in front of forests of TV cameras. Both of these men were elected over the objections of less photogenic opponents who believed, and for the most part still believe, that their victories were fakery. Both men still like a good photo. But listen, for a moment, to the list of topics Obama told reporters the two had already addressed, during a late-morning news conference in the White House Rose Garden.

There’s “an agreement to pre-clear travelers through immigration and customs” at the airports in Quebec City and Toronto Island, with more to come soon. On terrorism, the two agreed “to share more information—including with respect to our no-fly lists and full implementation of our entry/exit system.” They will hurry to “bring down methane emissions in the oil and gas sectors in both of our countries.” They announced “a new climate and science partnership to protect the Arctic and its people.” To that end, Canada will send its ministers later this year to a “White House Science Ministerial on the Arctic.”

Trudeau, Obama said, had expressed his support for a “new chapter of engagement with the Cuban people.” The two countries will “help Colombia achieve peace and remove the deadly legacy of landmines there.” Their scientists will “prevent the spread of the Zika virus.”  They are “urgently working to help Ethiopia deal with the worst drought in half a century.” Canada will join Obama’s Power Africa initiative “to bring electricity—including renewable energy—to homes and businesses across the continent.”

Trudeau will be back in Washington, as was already widely known, for Obama’s Nuclear Security Summit in a few weeks. And Obama will be in Canada by the summer, as was widely surmised, for the latest so-called Three Amigos summit that Stephen Harper inexplicably postponed when it was his turn to play host a year ago.

Other Canadian prime ministers have had announcements of greater depth to make when visiting their U.S. counterparts, but I don’t recall an agenda of such breadth. There’s homework here for most of Trudeau’s cabinet. “There’s something about a summit that speeds up decisions on a bunch of files,” a Canadian government official travelling with the Prime Minister told me as we were getting ready to leave Ottawa. David McNaughton, Trudeau’s new ambassador in Washington, said the approach of this visit pushed the tempo of his get-acquainted tour of the capital into warp drive. The results were in Obama’s Rose Garden list. And the day wasn’t even done yet.

Trudeau arrives at the White House 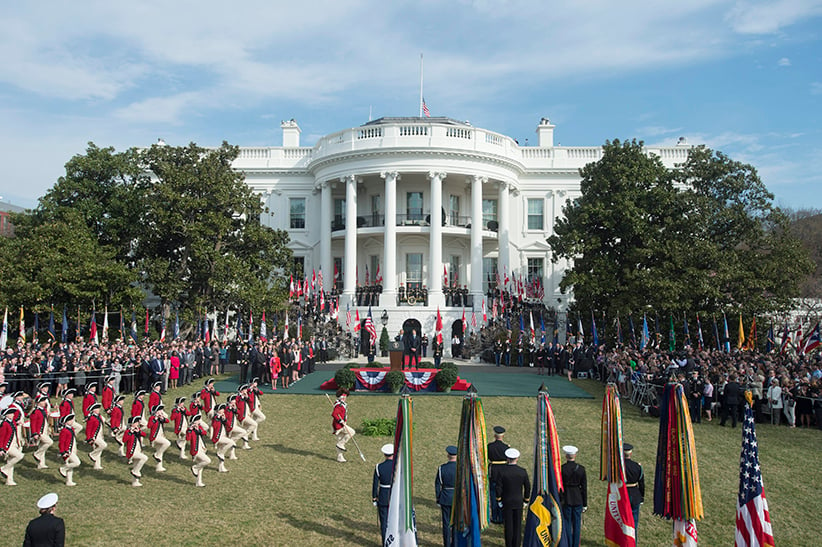 Trudeau arrives at the White House

From the White House, Trudeau and his senior ministers—Stéphane Dion, Catherine McKenna, Harjit Sajjan, Chrystia Freeland—went to the State Department, where they were joined by others—Marie-Claude Bibeau, Navdeep Bains—for a lunch hosted by John Kerry. Then Trudeau continued on to meetings with nearly a dozen Senators, half of them Republicans, and onward to call on House Minority Leader Nancy Pelosi. Thursday night’s State Dinner still lay ahead, as did Friday’s question-and-answer session with students at the American University.

It was a blitz. In Ottawa now and then, associations representing real-estate dealers or cheesemakers or research scientists sometimes organize “lobby days,” where they descend on Parliament Hill by the dozen and meet Members of Parliament in groups of four or five to plead their case on their pet issues. The goal is to accomplish through sheer force of number what is normally hard to do: to imprint a group’s hopes or worries on the capital’s entire legislative class. This was Justin Trudeau’s lobby day in Washington.

It was striking because it was so rare. Perhaps somebody from Brian Mulroney’s entourage can be found to remind everyone that he practiced this sort of full-court, Washington-wide press when he wanted to get Canada’s message out in Washington. With that possible exception, which was before my time, I’ve never seen a Canadian government work Washington so thoroughly at such a high level.

Jean Chrétien leaned rather too heavily on his friendship with Bill Clinton, which by the end of the Clinton years was no longer getting him very far in Congress or across the partisan divide. Chrétien urged his ministers to reach out to their opposite numbers in the Bush administration as early as possible, but he did not follow through with this sort of cross-Washington blitz. And though Stephen Harper was quick to lecture Chrétien on failing to build alliances across Washington, he was too worried about seeming cozy with a Republican when Bush was in the White House, and too ambivalent about Obama at best, to risk such an extended visit.

The first promise Trudeau should make to himself, if not to the public, is that he’ll be back in Washington in a year to repeat this blitz, no matter what choices a new President makes about visiting Ottawa. By then, one supposes some of Trudeau’s novelty will have worn off, but it cannot hurt for Congress and for both parties to get used to visits from a Canadian prime minister.

There was speculation among the reporters travelling with Trudeau that all this work is for naught because Obama is a lame-duck president who will be gone by January. My colleague Emmanuelle Latraverse from Radio-Canada asked Obama about it. His answer is worth quoting at length, because I think it’s basically the right answer. “As somebody who came in after an administration that, politically, obviously saw things very differently than I did,” Obama said, “what you discover is that for all the differences you may have in your political parties, when you’re actually in charge, then you have to be practical. And you do what is needed to be done and what’s in front of you. And one of the things that is important for the United States, or for Canada, or for any leading power in the world, is to live up to its commitments and to provide continuing momentum on efforts, even if they didn’t start under your administration.”

Once in the Oval Office, Obama discovered he could get behind some of George W. Bush’s work, “like PEPFAR, that has saved millions of lives and prevented HIV/AIDS, or provided vital drugs to those already infected with HIV/AIDS in Sub-Saharan Africa and other parts of the world.” In areas where he was less enthusiastic about Bush’s legacy, he said, “I might have tweaked it.” But even then, “you’re always concerned about making sure that the credibility of the United States is sustained, or the credibility of Canada is sustained — which is why when there’s turnover in governments, the work that’s been done continues.”

For precisely that reason, and especially after a long period of instability in relations between the heads of Canadian and U.S. governments—after Bush and Chrétien, and Bush and Martin, and even Bush and Harper and certainly after Harper and Obama—a broad and sustained effort to get Washington used to visitors from Ottawa would be handy. Not just so the two could saw away at border issues, the only issues that ever seem to capture the imagination of the tiny cadre of professional cross-border specialists. But also so that Canada and the United States can once again get used to relying on each other as both seek to do good work in the rest of the world.

There’s so much spectacle when the Trudeaus travel, at least for now and, one presumes, probably until Hadrien Trudeau graduates from high school, that effects beyond the fizzy and temporary are hard to imagine. But the best news about Justin Trudeau’s day in Washington is that it may have served as a template for much serious work to come.