The Prime Minister's chief of staff sat down with Paul Wells for an hour. Here are seven answers to the thorniest questions—and those that looked ahead to 2019. 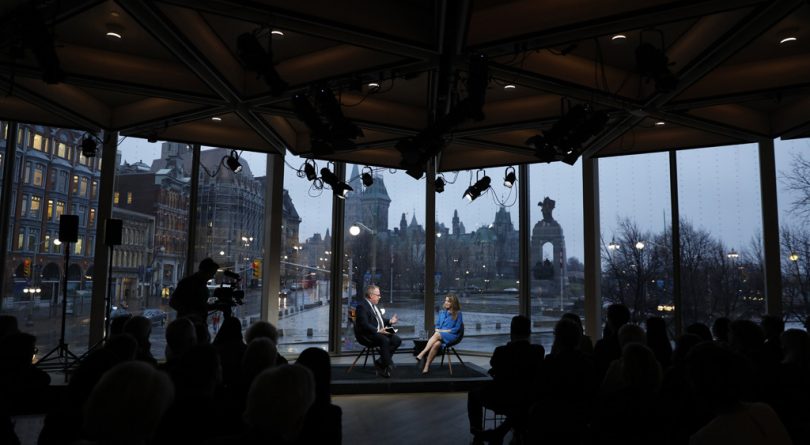 Maclean's Live with Katie Telford and Paul Wells at the National Arts Centre in Ottawa April 25, 2018. (Photograph by Blair Gable)

With the Trudeau government struggling in the polls and facing uncertainty on several files, the next federal election will pose a unique challenge: In 2019, can the Liberals run a repeat of the ‘sunny ways’-style campaign that delivered them to power in 2015?

“I would really hope that we don’t have to drop the hope part,” the Prime Minister’s chief of staff, Katie Telford, told Maclean’s senior writer Paul Wells during a live interview on April 25.

READ: Trudeau’s chief of staff Katie Telford on life inside the PMO

Here are seven highlights from that conversation, about a year away from the kickoff of the next federal campaign.

1. On the pushback Liberals face for promoting gender equity:

The Trudeau government has projected a stridently feminist image; the PM calls himself a feminist, and the Liberals have incorporated gender-based analysis into its policymaking. But that work has its critics. “The pushback is the pushback anybody gets,” said Telford, who emphasized the need to encourage women to run for office. “It’s important that we don’t just go back into backrooms,” she said. “[That] won’t draw more women out.”

2. On Liberals abandoning their promise on electoral reform.

Wells asked Telford what she’d say to progressive voters who cast a ballot for Liberals in 2015 based on the party’s promise to change Canada’s federal voting system. “I would talk about all the other things that we have accomplished,” she said, claiming that many voters’ priorities have shifted away from electoral reform.

Sign up for our new political newsletter, the Maclean’s Politics Insider >>

3. On that controversial trip to India.

Wells asked Telford if Trudeau’s team would take a do-over on a trip to India mired in criticism of Trudeau’s photo-ops and a disastrous dinner invitation extended to Jaspal Atwal, who’d been convicted of attempted murder. “I don’t know that we get do-overs,” said Telford. But she admitted the government has to do better to “connect those stories we wanted to tell back to Canadians.”

The Liberals have taken heat from religious groups for demanding that applicants for the Canada Summer Jobs Program sign an attestation that their organizations will respect Charter rights, including women’s reproductive rights. Asked what she’d tell voters disappointed in that decision, Telford said Liberals need more face time with their critics at their doorsteps: “Those are the voters we need to keep knocking on the doors of.”

5. On working for Justin Trudeau:

Wells asked Telford to dish on what it’s like to work for the Prime Minister. She joked that Trudeau once told her and principal secretary Gerald Butts to add some flare to their workspace. “I expect paintings or pictures up on your walls,” she said he said before he left for a trip. “I feel like you’re going to leave me.” Telford said Trudeau, himself a husband and father, encourages his staff to have “balanced lifestyles” that respect their families.

Wells wondered how a government that ran on a campaign of hope in 2015 could repeat the feat in 2019. That’s the plan, Telford said: “We need to be constantly and continuously learning and staying connected to a positive vision for government,” she said. “And that requires us to be hopeful.”

Not surprisingly, Telford said the Liberals will stick to their middle-class economic plan, and will attempt to convince Canadians that “despite all the competing events going on around the world that are making headlines,” that the Liberal record shows the government has helped all the people it planned to help with all the desired outcomes.