Each week MP Kevin Lamoureux sets up office in McDonald's — to aid constituents in a pickle, to listen if they have a beef

It’s just after 10 a.m. and Kevin Lamoureux is sitting in a corner at the McDonald’s on Keewatin Street in Winnipeg. Wearing a grey hoodie, jeans and black sneakers, he looks like a Saturday-morning regular. In fact, these are his office hours.

For the next four hours the former MLA and current Liberal MP for Winnipeg North will talk one-on-one with residents of his riding. “Even if I’m in Ottawa,” he says, “they know that every Saturday I’m here.”

And when he says every Saturday, he’s not exaggerating—he’s kept the same routine for almost 25 years.

The McDonald’s is on a street lined with boxy, single-storey industrial buildings the same washed-out grey as the sky on this day.

The bleak scenery contrasts with the warmth and life inside the fast-food restaurant. Families dine on multi-patty burgers, children tumble through the play centre and staff shuffle around cleaning up food lost to the high-traffic floor. At a corner table (always the same one), Lamoureux has set up office: note pad, pen, and an old, plastic recipe box filled with his business cards. He smiles as he greets constituents.

Benice Mandzik and Jeanette Moran are his first visitors. They present a petition from St. John Cantius Parish outlining concerns about euthanasia.

By noon, Lamoureux has met with 10 people. It seems busy. Not at all, he says. He’s even found a moment to eat a Big Mac meal (hold the lettuce). Most Saturdays he meets with between 14 and 40 constituents, so a chance for a bite means it’s relatively calm.

Figures of Speech: A deep dive into who says what in the House of Commons

By his recollection, Lamoureux began meeting constituents at the McDonald’s in 1989 or ’90, not long after he was voted into the Legislative Assembly of Manitoba. Now, elected to his federal seat in a 2010 by-election, it’s a commitment he keeps up even as parliamentary secretary to the government House leader.

“I speak more at this table we’re sitting at than I do on the floor of the House of Commons,” he laughs. “I don’t do all the talking, just most of it. I do listen, too.” 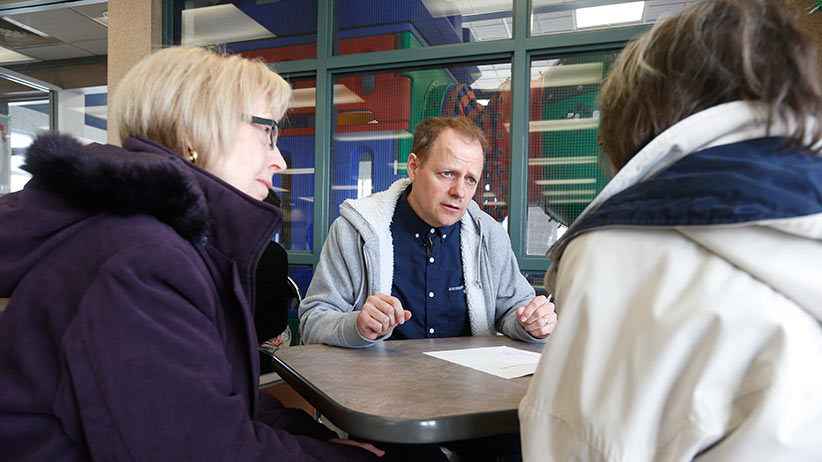 During debates, he’s spoken more than any other MP in the Trudeau-led Parliament — 54,663 words as of May 1. That’s more than twice as many words as the Prime Minister and about 10,000 more than the next chattiest MP, Conservative Garnett Genuis. Read William Faulkner’s novel As I Lay Dying aloud: that’s how many words he’s said on the floor.

“I don’t think we should measure individuals by how many words they speak inside the House,” he said. “You can be quiet and effective. Some of our strongest advocates at the standing committees say very little on the floor of the House of Commons.”

That said, there’s no denying Lamoureux has had a lot to say on everything from citizenship and income tax to ISIS and airports.

The dedicated public exposure has likely helped him in the polls (he held his seat in 2015 with 68.9 per cent of the vote).

“I remember when I was 26 years old as an MLA saying I want to be accessible, not just during elections but in between elections. That’s what this is all about. I made that commitment back in 1988.”

Since taking federal office, he’s mentioned his McDonald’s by name at least 15 times. “A lot of the things I refer to come out of McDonald’s. Policy statements. I’ll often make reference to having met someone at the restaurant and this is what they had to say,” he says. “We’ve had changes in regulations come through McDonald’s.”

Lamoureux reckons that during his career he’s racked up more than 1,200 visits to this McDonald’s, spending more than 5,000 hours talking to constituents.

Lamoureux says it keeps his “feet on the ground.” It may be sticky and covered in fries, but he wouldn’t have it any other way.