Justin Trudeau didn't stray off-script in his press conference, looking back on eight months in power 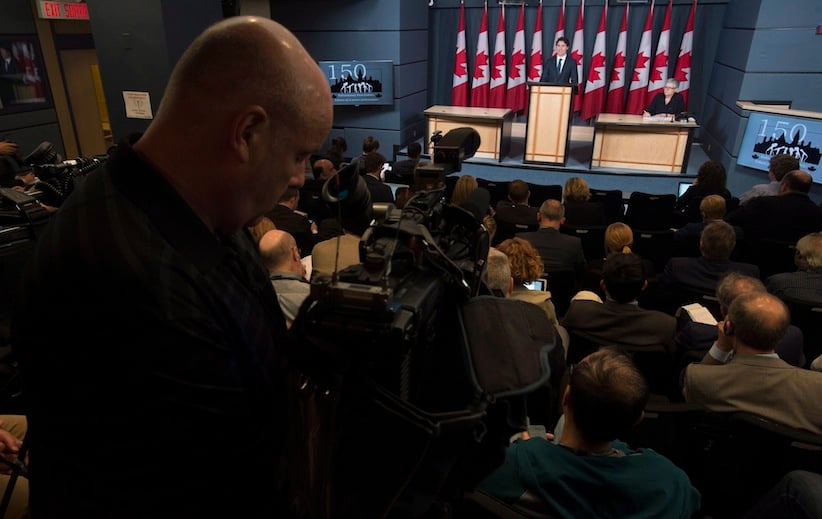 Prime Minister Justin Trudeau speaks to a room full of reporters and cameramen as he takes part in a news conference to mark the end of the parliamentary session, Wednesday, June 22, 2016 in Ottawa. THE CANADIAN PRESS/Adrian Wyld

Prime Minister Justin Trudeau held a news conference just off Parliament Hill today in the National Press Theatre to look back on his first eight months in power. Among the highlights:

1. A look at the work already done.

“The first is the middle class tax cut. One month after taking office, we introduced legislation that would cut taxes for the middle class and raise taxes on the wealthiest one percent of Canadians…. Once the legislation implementing the Canada Child Benefit receives royal assent in the next few days, the benefit payments will start to arrive in family bank accounts just a few weeks from now… The third big promise we’ve kept is to strengthen the Canada Pension Plan… We know that right now fewer than four-in-10 Canadian workers have access to a company pension plan.”

MORE: Why the CPP is the Liberals’ bold play for the middle

The Liberals’ campaign promise last fall not to buy Lockheed Martin’s F-35 fighter jet is raising serious questions. How can the government make good on its pledge to to hold an open competition for a new aircraft to replace the aging CF-18s, but exclude one of the main options? And Lockheed Martin warns that Canadian aerospace firms will lose lucrative F-35 contracts if Ottawa picks a different jet. Trudeau didn’t really explain how he can cut the F-35 out of the process:

“As many of you know, the procurement process, particularly for the jets, had been significantly messy over the past years, and our ministers, [Defence Minister Harjit] Sajjan and [Public Services Minister Judy] Foote are working extremely hard to ensure that we deliver to our Canadian Forces the jets they need in a responsible and in the right way… There’s been an awful lot of speculation in the media, rumours going around about this or that. We are working very, very hard and thoughtfully to ensure that we deliver to our forces the right jets, the right way at the right price.”

3. No additional clarity on missing and murdered Indigenous women.

The mandate of that promised inquiry into missing and murdered Indigenous women has been the subject of speculation. Will it focus mainly on probing past cases—including instances when police are accused of failing to take reports of missing Indigenous women seriously—or future solutions? Asked what he expects from the inquiry, Trudeau gave the most expansive possible, three-part answer:

“The first [piece] is we need to offer justice for the victims. For too long in this country, indigenous women and girls have gone missing without much notice, without much reaction, without society in general realizing the tragedies that are among us…Secondly, to offer families and opportunity to heal, to acknowledge and hear acknowledged their loss and share their stories in a meaningful way that will help with the process of coming to grips with unspeakable tragedies. And, finally, I expect that this national public inquiry will clearly set a path forward to end this ongoing national tragedy…”

4. Trudeau sticks to his talking points.

At the end, Trudeau was asked what he’d learned in eight months as Prime Minister, and the reporters in the room leaned forward a little, hoping they might hear some personal reflections beyond the carefully constructed answers he had been delivering up to then. They were disappointed, as Trudeau circled back to his opening pitch:

“[We’ve] built a team of people very much focused… on demonstrating that a thoughtful, responsible, value-driven group of people who come together to serve the country that they love so well in a positive and respectful way can very much achieve meaningful things for Canadians. And on the three things that we were able to achieve of significant impact on the lives of Canadians, lowering taxes for the middle class to helping families with the cost of raising their kids with the new Canada Child Benefit or securing pensions for the future…”