A new poll finds that among those who watched the debate, 32 per cent said the NDP leader did best—and 25 per cent of Liberal supporters said the same 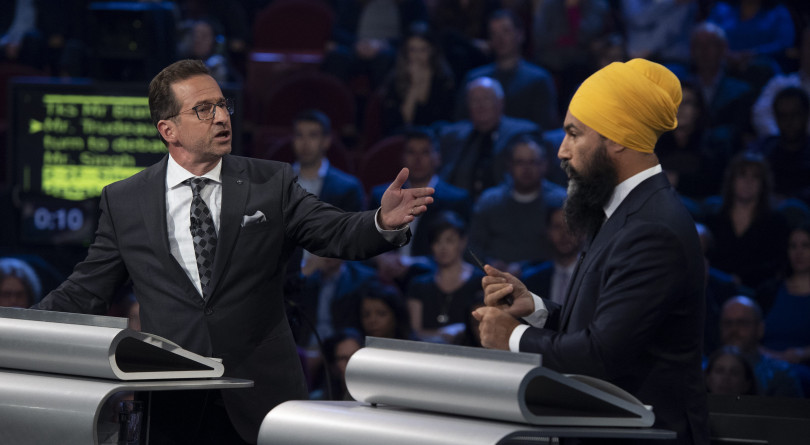 Blanchet and Singh debate a point during the federal leaders debate in Gatineau, Que. on Oct. 7, 2019 (Justin Tang/CP)

Jagmeet Singh was the clear winner of the English-language federal leaders debate on Monday in the eyes of voters, a new poll suggests—and perhaps even more significantly, Liberal partisans and unaligned voters were particularly impressed with him.

One-third of those who watched the debate (32 per cent) said the NDP leader turned in the best performance of the six leaders on stage, while 20 per cent of those who just heard about the debate concluded the same, according to the poll done by Innovative Research Group for Maclean’s.

Obviously enough, 55 per cent of those who identify as NDP supporters picked Singh as the winner, but here’s where it gets interesting: 25 per cent of Liberal supporters said the same—just nine per cent fewer than those who picked Liberal Leader Justin Trudeau as the winner—and 29 per cent of unaligned voters also awarded the trophy to Singh. In a scrum on Monday night, a reporter asked Trudeau whether he had been taking particular aim at Singh on the debate stage because his left flank is feeling vulnerable, and while he side-stepped any direct answer, the poll results suggest that could well be it.

That puts Singh way ahead in the over-achiever category, with Conservative leader Andrew Scheer next, with 20 per cent of people saying he exceeded expectations, while 26 per cent said he was worse than expected. Overall, 17 per cent of respondents said Scheer won the night, including a solid 52 per cent of Conservative supporters. But he was picked by only single-digit percentages of other partisans, with the exception of 12 per cent of Bloc Québécois voters.

“He was almost as popular among CPC identifiers as Singh was among NDP identifiers,” Lyle says. “But he was not as successful as Singh among supporters of other parties or among the unaligned.”

Trudeau finished a close third to Scheer in terms of debate performance, with 13 per cent of those who watched and 17 per cent of those who heard about it declaring him the winner, but a hefty slice of his base favoured Singh. And Trudeau was declared a debate overachiever by just 11 per cent of poll respondents, while 27 per cent said he performed worse than expected.

“Justin Trudeau did not have a good outing,” the pollster says. “The bright spot for Trudeau was essentially tying with Singh as the winner among Green and PPC voters and tying for second with Singh among Bloc supporters.”

Bloc Leader Yves-François Blanchet, was of course picked by his party’s supporters as the night’s victor, but he also left almost as many people (14 per cent) impressed as thinking he underperformed (18 per cent).

The leader of the new People’s Party of Canada did not make much of an impression, despite his controversial and much-coveted inclusion on the national debate stage. Just three per cent of those polled said he won the debate, and many more thought he under-performed (27 per cent) than impressed (nine per cent).

“Maxime Bernier was very much a minor figure in these results,” says Lyle. “The only silver lining for Bernier is that three per cent saying he won is three per cent more than Andrew Scheer was hoping he would he score.”

The poll results also suggest Canadians are less than obsessed with the campaign at this point. Fewer than half (44 per cent) said they had even heard about the debate, and of those who had, 58 per cent watched some portion of it.

Innovative also asked people whether they have read, seen or heard anything about each party leader recently, and if so, what sort of impression it left on them.

Despite the hoopla of news coverage and hefty party expenditures on leader tours and advertising, the highest awareness exists for Trudeau and the Liberals, at only 52 per cent, followed by Scheer and the Tories at 48 per cent and Singh and the NDP at 37 per cent.

“These are a key measure of momentum,” says Lyle. “The first thing that stands out is how disengaged Canadians are in this election.”

The second notable finding is just how handily Blanchet and Singh are outdoing the two leading parties, he adds. Among people who are tuned in, the Liberals and Conservatives each have 20 percentage points more saying they’ve been left with a bad taste in their mouth than a pleasant one. But the Bloc and NDP leaders each have 40-point net-positive impressions.

“That is huge positive momentum among those who have heard something about Blanchet and Singh,” Lyle says. “Their challenge is being heard.”

May, for her part, is faring better than the two leading parties but lags well behind the Bloc and NDP leaders, with 36 per cent saying they have a positive impression of her and 24 per cent a negative one.

The poll results are based on a representative sample of the Canadian population, but because of the methodology, a margin of error does not apply.