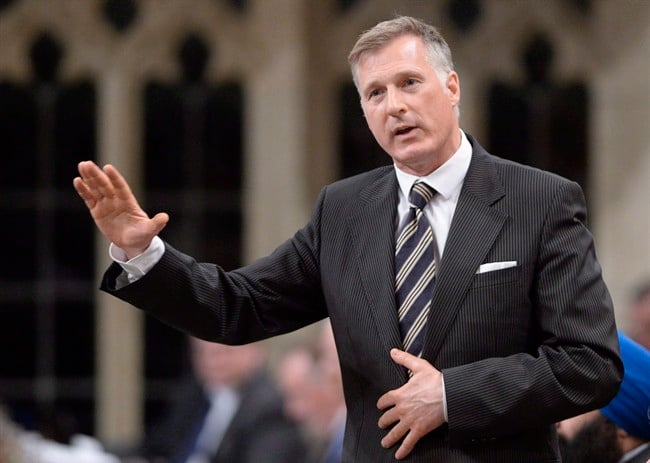 Minister of State for Small Business and Tourism Maxime Bernier answers a question during Question Period in the House of Commons on Parliament Hill in Ottawa, Tuesday May 5, 2015. (Adrian Wyld/CP)

OTTAWA – Like Stephen Harper’s favourite band the Beatles once sang — you say goodbye, and I say hello.

Next month’s Conservative party policy convention will feature a farewell tribute to the former party leader and prime minister, closing the books on the Harper era and signalling party members that it’s time to accept last fall’s election lessons and move on.

That includes kicking off, in earnest, the race to replace him.

There are a dozen names in the mix already but two are expected to formally declare their candidacies this week — Ontario MP Kellie Leitch and Quebec MP Maxime Bernier. Bernier is to jump into the race on Thursday.

Both have made no secret of their leadership ambitions, with Bernier setting up a website and printing T-shirts ahead of a conservative conference in February and Leitch criss-crossing the country, collecting signatures, volunteers and money to help back her bid.

Clement said he has not yet made up his mind and doesn’t see the May 26-28 convention in Vancouver as a tipping point.

“I have my own time schedule,” he told The Canadian Press. “I feel no pressure at this point.”

Related: What should a modern Conservative leader look like?

But other Conservatives have told The Canadian Press they think the convention is a natural starting point where hopefuls should make it clear whether they intend to run, if for no other reason than to be fair to the other candidates.

It’s also a matter of strategy: is a candidate’s focus going to be on courting existing party members or signing up new ones?

“If one of your strategies is to convert existing members because you feel they will come out and vote in a more consistent way than new members you might bring, then you may want to announce before or during the convention,” said Michele Austin, who has worked for both interim Conservative leader Rona Ambrose and Bernier.

While the convention may sound a starting gun, the leadership vote set for May 27, 2017, will still be a year away at that point.

Most memberships are only sold for a single year, so anyone signing up new party members before the Vancouver convention will have to sign them up again next year, or convince them to buy two-year party memberships.

Moore, who was once rumoured to be eyeing a leadership bid but now says it is not in the cards, makes the case that issues that are currently top of mind when considering the best next prime minister may be different a year from now.

Global security, the economy, or some surprise issue could prompt a sudden desire for a particular candidate to emerge, he said.

“At the last minute, people could get pushed into running,” said Moore.

One person ruling himself out of the race, however, is MP Steven Blaney, who acknowledges he had been considering tossing his hat in the ring.

“I want to continue but maybe at a less frenetic pace,” he said in a telephone interview.

“Sometimes you have to know when to move slowly and surely.”

But the MP for Bellechasse-Les Etchemins-Levis isn’t ruling out a possible leadership run a few more years down the road.