Left-wing lock: Will the NDP and Liberals split the progressive vote? 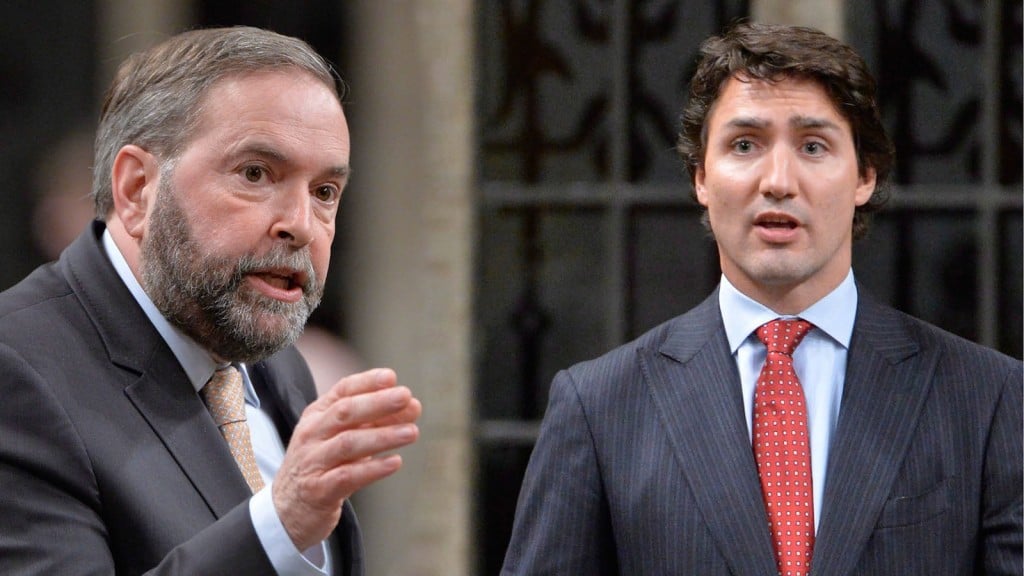 Bitter political enemies Justin Trudeau and Thomas Mulcair will go at it alone in the 2015 election. The Liberal Party leader and his NDP homologue have all but ruled out any sort of non-aggression pact even as both parties chase the left-leaning electorate. “There are some very, very big impediments to forming a coalition with the NDP. Which is why I am against it,” Trudeau recently told Postmedia News.

Few people are happier about this than Conservative MP Erin O’Toole. On several key policies, he says, the NDP and the Liberals seem to be morphing into one progressive blob. It raises the distinct possibility of a split in the progressive vote in the 2015 election—and thus making O’Toole’s job on the Conservative’s re-election campaign team that much easier. Trudeau’s denial of a potential coalition aside, O’Toole sees the Conservatives bringing up the possibility of such a thing during the election campaign. “I don’t think Canadians would be comfortable with a firm left coalition of NDP and Liberals.”

The two parties are undeniably close on a variety of issues. Both were against Canada’s participation in the mission against Islamic State; both are in favour of a loosening of Canada’s marijuana laws—decriminalization in the NDP’s case, legalization for the Liberals. Both favour some form of childcare strategy, and have made loud noises about the strains on the country’s middle class. Under leader Thomas Mulcair, the NDP’s position on Israel has edged closer to that of the Liberals, while the Liberal Party has begun courting the NDP’s traditional territory of organized labour.

The Liberals’ leftward tilt is in part to regain territory in Quebec, where the party has yet to fully recover from its scandal-plagued tenure in the mid-2000s. Trudeau’s decision to oppose the mission in Iraq played well in Quebec, where support for military intervention is typically the lowest in the country. The NDP has the lion’s share of the seats in the province, and Mulcair remains the most popular federal leader, according to polls. Yet Trudeau has revived the Liberal brand somewhat in Quebec, and the party has far outpaced its opposition in fundraising numbers.

This stubborn refusal to yield—in the form of a party merger, or at least a non-aggression pact in key ridings—is a source of frustration amongst many on the left, who see a possible repeat of the 2011 election. That year, the Conservatives were able to secure a majority thanks largely to a split of the centre-left vote in Ontario. “It’s a head-in-the-sand mentality. Anytime the issue of the two parties cannibalizing the vote comes up, the answer from either is, ‘We’re going to run someone in every riding and win the next majority government,’ ” says Pascal Zamprelli, a former Liberal nomination candidate who volunteers for the party. “Maybe, but it’s unrealistic to think vote-splitting doesn’t hurt.”

Avoiding a split of the left-leaning vote may fall to outside organizations like Lead Now. Ultimately, the Vancouver-based advocacy group wants electoral reform. In the interim, it is organizing strategic voting initiatives in ridings where the Conservative candidate won by less than 50 per cent in 2011. (There were 59 such ridings, according to data compiled by Pundits’ Guide.)

“We’re basically saying if the parties won’t cooperate before the election, then we are going to organize voters across party lines to defeat conservative candidates,” says Lead Now executive director Jamie Biggar, adding his group has already set up teams in 15 ridings. “Why is Stephen Harper in power today? Because in 2003 he ended vote splitting on the right” with the merger between the Progressive Conservatives and the Canadian Alliance.

The NDP has trended downward in the polls as of late, and has been stung by a string of by-election losses. Perversely enough, this is one of O’Toole’s concerns in the coming year. “In Ontario, we need a viable NDP,” he says, if only to steal away Liberal votes. The Conservatives also need the Liberal Party to continue its leftward shift and convince NDP supporters to vote red. Erin O’Toole hopes his opponents are wildly successful.