Legal pot is here to stay, no matter who the next Prime Minister is

Oct. 25: Scheer finally commits to keep marijuana legal if he wins in 2019, and Singh is down another Dipper 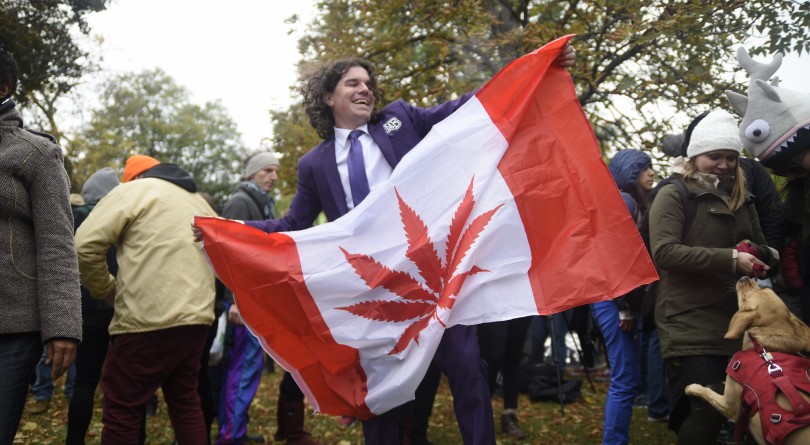 A person dancing with a replica of the Canadian flag where the &quot;maple leaf&quot; has been replaced by marijuana leaf during the Cannabis Legalization Day celebration in Toronto, Canada. Recreational marijuana became legal in Canada on 17th October, 2018. To celebrate the day people gathered at Trinity Bellwoods Park around noon. The party continued until late in the evening in Toronto, Canada. (Photo by Arindam Shivaani/NurPhoto via Getty Images)

After a week of tiptoeing around the question, Conservative Leader Andrew Scheer stated a Tory government would not roll back legalization of cannabis. “We recognize the reality now, so I do not intend to go back and make marijuana illegal again,” he told a Quebec radio station, though he repeated his promise to review what happens over the next year and “make the necessary corrections.” (National Post)

In other pot news, Ontario’s public broadcaster is none too pleased with that stoner Polkaroo mascot. (Canadian Press)

Since the spring when Prime Minister Justin Trudeau pitched his ‘framework’ plan for First Nations to become self-governing, the process has unravelled, writes John Geddes:

Trudeau proposed a brisk timetable for getting it done—consultations starting last spring, legislation to be tabled before the end of this year, in time for that bill to be passed into law well before next fall’s election.

But making the framework a reality at that pace now looks at best problematic, at worst a prescription for a rupture in the Liberals’ relationship with First Nations. Asked if there’s any chance that the Assembly of First Nations will support a framework bill tabled in what’s left of 2018, AFN national chief Perry Bellegarde said, “Our chiefs have said stop the current process—do a total reset with First Nations leading the way.” (Maclean’s)

Mark Carney, eco-warrior: Politico takes a deep dive into how Canada’s former top banker, now head of the Bank of England, is using his position to push for action on climate change:

From twin perches atop the British central bank and a global oversight body, Carney isn’t shy to use a big tool in his kit — regulation — to nudge banks and investors to change their ways. Some would say more than nudge, but admirers and critics alike acknowledge his influence and impact. (Politico)

Carney’s move as head of the global Financial Stability Board to urge publicly-traded companies to disclose climate change risk has won cautious praise from activists, though they’re pushing for mandatory disclosure. On the other hand, critics including some former BoE officials say Carney is overstepping his bounds: “It seems far-fetched that this is high on the list of things banks need to worry about now. Brexit risks, or the risk of another financial crisis … are much larger worries.”

On this side of the pond, Liberals are more than happy to enlist Carney to their cause as they promote their plan to impose a carbon tax—and distribute rebate checks—in Ontario, Manitoba, Saskatchewan and New Brunswick. (Twitter)

Carney’s successor at the Bank of Canada, Stephen Poloz, stirred things up too Wednesday, with another rate hike, bringing the bank’s benchmark rate to 1.75 per cent. While some in the world of finance blasted the move, Poloz hasn’t had to face anything like what his counterpart at the U.S. Federal Reserve has endured. President Donald Trump has attacked Fed Chairman Jerome Powell several times this month for the central bank’s tightening, calling it “loco”, saying he “maybe” regrets appointing Powell, and calling the Fed his “biggest threat.” Are central bankers about to replace journalists as the new enemy of the American people? (Twitter, CNN)

A select number of ‘like minded‘ members of the World Trade Organization, sans the world’s two largest economies, are in Ottawa for talks on how to keep the 164-member trade agreement alive in the face of Trump’s trade war with China. Quartz has a straightforward explainer about what the group of nations hopes—and needs—to achieve. (Quartz)

What, me worry? Another NDP MP is stepping away from federal politics, marking yet one more loss for leader Jagmeet Singh. This time the departing dipper is B.C. MP Sheila Malcolmson, who’s heading to provincial politics. Is Singh panicked? “Not at all.” (CTV News)

If you are keeping score, that’s eight NDP MPs in this parliament who’ve said they won’t bid for a comeback in 2019.

To ban, or not to ban arms to Saudi Arabia? That is the question Trudeau has been waffling over this week in the wake of the kingdom’s admission that its officials killed a journalist. Germany was quick to restrict weapons exports to Saudi Arabia, and Trudeau has been under pressure to do the same. The Prime Minister has said Canada faces significant penalties if its scraps a $15-billion deal to sell armoured vehicles to the Saudis. But now he says his government is “looking at … suspending export permits. We’re also looking at the contract to try and see what we can do because obviously, as we get clarity on what actually happened to Jamal Khashoggi, Canadians and people around the world will expect consequences.” (Canadian Press)