Les reviews are in for O'Toole, and there are some questions

Politics Insider for Aug. 31, 2021: The challenge facing O'Toole to maintain his o'mentum; cabinet questions; and a choice facing Indigenous voters 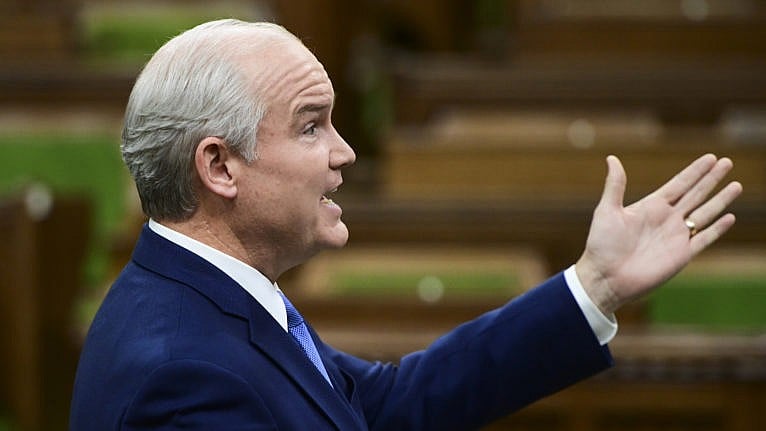 Conservative leader Erin O'Toole rises during question period in the House of Commons on Parliament Hill in Ottawa on Tuesday, June 22, 2021. THE CANADIAN PRESS/Sean Kilpatrick

We will have to wait for polls to see what francophones made of Radio Canada’s excellent Cinq Chefs broadcast Sunday night—which featured five leaders being grilled—but commentators have some thoughts!

Paul Wells, writing in Maclean’s, observes that Erin O’Toole struggled to deliver answers that one would characterize as satisfying to Quebecers.

O’Toole came well-prepped and stayed good-humoured, but his answers were mostly selected from a decent array of prepared lines. He delivered these well enough, but you can only repeat “J’ai un plan” so many times before people start to giggle.

Worse, he didn’t have clear answers to big obvious questions. Trudeau has already agreed to send $6 billion to Quebec as its share of a daycare plan the Liberals are setting up nationwide. And since Quebec has had a subsidized daycare network for 25 years, the province didn’t even have to promise to do anything new to get the money. In cancelling the Liberal plan so a Conservative government could send larger cheques to parents to use as they please, would O’Toole cancel the $6 billion payment to Quebec?

Wells also has interesting observations about the state of the race, the Liberals’ search for a wedge and the difference between campaigning on values versus benefits.

O’Toole’s weakness is that he is trying to sell a benefits platform but he leads a values caucus, and he has valid doubts about whether he can sell their values. The prospects for a Conservative government’s competence and cohesion are worth asking. When three people asked O’Toole about them on Sunday, his answers weren’t great. Trudeau’s weakness is that he often doesn’t seem particularly interested in governing, at least not if anyone will say a word against him.

In La Presse, Paul Journet has a closely observed column about the debate (translation), in which he points out that although Trudeau said he doesn’t regret calling the election, he must be having doubts by now: “The only consolation for him was that the program was not watched in English Canada.”

I’ve been dreading it for a long time, personally. Michael Wernick, who was the highest civil servant in the country, expressed in 2019 the same fears, in view of the increasingly violent speeches, to the right of the right. On that, a word about the police … What we saw in southern Ontario on Friday was a second-rate police job. When you know the violence from the bottom of the air, it is surreal to think that the crowd could have approached the Prime Minister in this way. It would also be surreal for any party leader.

In Le Journal De Montreal, Richard Martineau is pleased (translation) that the election is turning against Trudeau, who he thinks has turned Canada into “a sort of large student hostel where French Canadians are only one of the hundreds of ethnocultural communities that make up the great Canadian mosaic.”

Chantal Hebert has a column in L’actualité (translation), observing that voters have yet to absorb the idea of Prime Minister O’Toole, and poses an interesting question:

We still wonder who a Prime Minister O’Toole would set his sights on to lead the Ministry of Finance to replace Chrystia Freeland. This conservative unknown clashes with the current practice during past elections. In 1984, the prospect of Michael Wilson being called upon to take the reins of finance in a possible government led by Brian Mulroney reassured the business community. Ditto in the case of the duos Chrétien-Martin, Harper-Flaherty and Trudeau-Morneau. If there is a future finance minister behind the scenes of the Conservative campaign, it is about time he or she took the stage.

Older voters shifted: The fact that Hebert is even wondering who would serve in a O’Toole cabinet points to his O’mentum. One poll on Monday gave the Tories a nine-point lead. Eric Grenier, at the Writ, sorts through the numbers, looking, usefully, at who has shifted their support.

Grenier concludes, by the way, that O’Toole’s path to victory still looks narrow, in spite of the big shift in voter intentions.

Debates on the way: Voting day is three weeks away. The debates, which take place on Thursday in French, Sept. 8 in French and Sept. 9  in English, are likely to be key, writes L. Ian MacDonald in the Gazette.

Pressure on O’Toole: Until then, O’Toole is likely to face tougher coverage, now that it looks like he might be prime minister. He got some Monday, from CTV and on his lack of an anti-racism policy, and from Global on his less ambitious climate targets. Global also has a Lori Turnball column taking him to task for failing to denounce candidate Cheryl Gallant. She notes “he’s getting hammered with the hard questions about how he will manage the divergent and often controversial factions within the Conservative tent, including pro-lifers and anti-vaxxers.”

Also, a Nova Scotia candidate dropped out after allegations of sexual assault came to light on social media.

Whither the Liberiginals? In Maclean’s, Niigaan Sinclair has an interesting column on how the Indigenous vote could go in this election, including a helpful recent-history lesson:

In 2015, more Indigenous voters came out to support the Liberals than ever before, helping to give the Liberals a majority in Parliament. This motivated vote was inspired by two words: Stephen Harper, which explains why this same support—and overall Indigenous voter participation—dropped off in 2019, when on-reserve voting dropped from 61 per cent to just over 50 per cent and the Liberals ended up with a minority Parliament. The lack of Indigenous support in 2019 was due to apathy and disappointment with the Liberals first term in office.

Behind the anti-vax scenes: The Star has a vivid story on how anti-vaccine protesters are organizing themselves online—using the encrypted messaging app Telegram.