Appetite for a new Conservative party was modest at a Calgary dinner, where the bitter memory of vote-splitting is still a searing one. 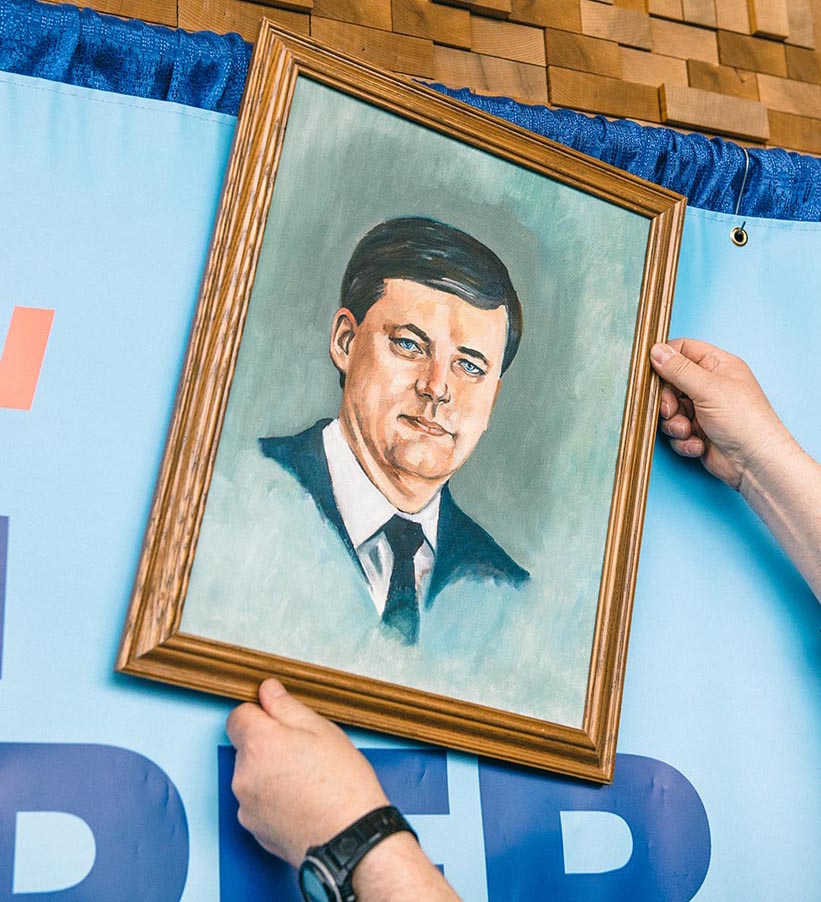 May 27, 2016. Delegate Mark Kihn of Calgary, hangs a portrait of former Prime Minister Stephen Harper by Alberta artist Donald Kew during the Conservative National Convention in Vancouver, British Columbia. Kew based the likeness of Mr. Harper for this painting on that of former United States President John Fitzgerald Kennedy. (Photograph by Marlin Olynyk)

Scott Gilmore started this east-to-west Canadian pub conversation series in search of a new conservative party, a movement of “radical moderates” at a time when those spitting flame at the edges seem to hog the oxygen (Donald Trump, Bernie Sanders, Kellie Leitch and Marine Le Pen). Among the 150 people who came out to his Calgary evening this week, sitting at the longest group table were a dozen disillusioned Tories actively wrestling with abandoning the party they felt abandoned them first.

In their case, the party is also deserting its own storied brand: the Alberta Progressive Conservatives, party of Ralph Klein and Peter Lougheed and 44 years of uninterrupted rule. A clutch of moderate PCs don’t know if they belong anymore, not with former federal minister Jason Kenney leading and bidding to dissolve the party into some new hybrid with the more conservative Wildrose party.

READ MORE: Changing the future for Canada’s conservatives, one dinner at a time

One of them has already made the sort of leap Gilmore mused about in his recent Maclean’s column “Confessions of a self-loathing Tory.” Troy Wason quit as PC executive director the day after Kenney won the leadership, and on Monday announced he’s begun contract work with the Alberta Party, a vaguely centrist party that boasts one MLA and a couple percentage points of public support. Wason was a Tory activist for 33 years, and his party ruled for all but two of those; he made this jump leaving a Kenney-led movement that would crush the NDP in most polls, and now helps a party has no shot of winning government in 2019 but mayyyyyyybe they can work towards 2023?

“I want to be part of something I’m proud of and passionate about, and I can’t get behind ‘unite and defeat the NDP’—that’s a slogan,” Wason says. When meeting with the Alberta Party crew, “I sat down with people who want to believe in something again.”

Those around his table at Gilmore’s ‘New Conservatives’ event were past PC executives, a current board member, an architect of the party’s almost-lost 2012 campaign and several other long-time party loyalists who dislike what they see as Kenney’s wrecking ball of a plan. Their Tory party had become as moderate as they are in the last decade or so, under premiers like Ed Stelmach, Alison Redford and Dave Hancock; it helped, too, that the more right-wing conservatives had the Wildrose party to join. Kenney’s unite-the-right agenda wrests the party away from their progressivism.

But these party stalwarts were around when Ralph Klein led, and they watched as moderates fought within his tent alongside program-slashers and unabashed social conservatives, and routinely secured senior cabinet posts. These pub night attendees aren’t sure yet about following Wason. They feel doubtful that Kenney, more ideologically conservative than Klein ever was, will offer moderates a seat at the table. Right now, they fear their choice lies between being voiceless moderates within a power-seeking conservative party, or becoming the conservatives within a moderate party with limited voice and even less potential for power.

Many former red Tories will stay put. The urge to topple Rachel Notley is too great a unifying factor among conservative Albertans.

Wason and his friends don’t feel the same way—yet—about the federal Conservatives. If Leitch or Brad Trost were to win, or if Kevin O’Leary could have, they’d get the same itchy feet. Many back Michael Chong, Erin O’Toole or Lisa Raitt, but they mostly feel they could live with a Maxime Bernier-led brand. That seemed to be the buzz in much of the room of Conservatives that Gilmore assembled, inasmuch as one could hear anything being said by anybody.

Gilmore hosted at a pub in high-ceilinged former bank in downtown Calgary, his guests sprawled at tables across a long L-shaped part of the second floor. His microphone wasn’t working, so Gilmore stood on a chair and yelled at the crowd. A few people, mostly at Wason’s table, got tired of straining to listen and resumed their own noisy conversation. But the vast majority cupped hands to their ears, leaned their wincing faces forward and tried to engage.

“As I go across the country, there’s a lot of you,” Gilmore hollered to the roughly 12 dozen people. He sought and won agreement that political debate needs to be less corrosive, that the party remains noisy about anti-immigrant and social conservatism at its peril. When he asked who wants a greater focus on climate change, he got few hands going up (Calgary being Calgary, y’know).

This crowd’s age was mixed, but more men in suit jackets with pocket squares and no ties than you ever see at a Calgary event, let alone one for conservatives. (Gilmore’s own blazer and pocket square were draped on a chair nearby as he spoke.) Joining this crowd of Chong supporters and provincial red maybe-Tories were people there as wary and/or bemused rubberneckers—a Bernier fundraiser, a Kenney booster, a former Harper government aide, and Peter McCaffrey, a researcher from the Preston Manning’s Manning Foundation. He was befuddled that Gilmore and others were jaded, given such ideological diversity among the conservative leadership crop. “If you don’t like the current set, what is it you’re looking for?” he asked. The reply from Gilmore and others was that they want a moderate leader but are resigned to the fact they won’t win.

When Gilmore asked who wants a new federal party, only four or five hands rose. Calgary’s Tories are, after all, witnesses to the Reform Party’s rise, and the longtime vote split that helped Liberals win four straight elections. But it’s also a populace that isn’t yet as disheartened with the federal fray as Wason and his peers are; the leadership is yet unsettled, and Bernier may turn out to be someone whose big tent they can settle under. They reacted more warmly, but just a little to Gilmore’s musings about his upstart group forming an advocacy group or media entity. They crave some kind of voice at the table, and don’t necessarily have to nod along with all those voices.

Some attrition, some losses of the most moderate or most radical is inevitable with a party leader who pursues a new direction. When Stephen Harper fused the Canadian Alliance and federal PCs in 2003, MP Scott Brison became a Liberal and a tiny group registered as the Progressive Canadians. Harper shrugged it off. His former acolyte Kenney seems likely to tolerate a few volunteers joining the puny Alberta Party, Liberals or NDP, if they want to forsake a shot at power. Depending on how he manages, Bernier or somebody else inheriting the Conservative crown won’t even have to risk losing many people in this modest Gilmore bloc.