Ala Buzreba: 'I apologize without reservation for the comments I made a long time ago'

CALGARY — A woman who posted offensive tweets as a teenager several years ago has decided to step down as the Liberal candidate in the Calgary-Nose Hill riding in Alberta.

Ala Buzreba had earlier apologized for her tweets and blamed youthful ignorance for her social media faux pas.

In a message posted late Tuesday on her Facebook page, the 21-year-old again apologized “without reservation” for posting comments “that do not accurately reflect my views and who I am.”

“I am confident this decision is the right decision for myself and for the people of Calgary Nose Hill.”

Buzreba said she has posted a lot of content on social media over the years, and like many teenagers, did so “without really taking the time to think through my words and weigh the implications.”

Buzreba, who was running against Conservative junior cabinet minister Michelle Rempel, issued an apology earlier in the day after some tweets she posted four years ago began circulating on Twitter, apparently dug up by Conservative supporters. 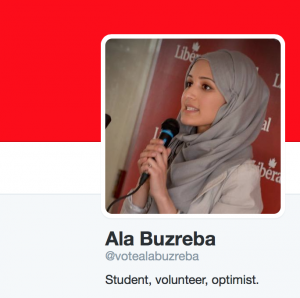 In one, she tells a strident defender of Israel: “Your mother should have used that coat hanger.”

In another, she tells a tweeter she deems a racist to “go blow your brains out you waste of sperm.”

And in yet another, she reports that she just got her hair cut and looks “like a flipping lesbian.”

Buzreba said the tweets “reflect a much younger person” and that she has learned a lot about social media since she posted the vitriolic comments.

“I apologize without reservation for the comments I made a long time ago, as a teenager, but that is no excuse,” she tweeted Tuesday.

“They do not reflect my views, who I am as a person, or my deep respect for all communities in our country.”

Liberal Leader Justin Trudeau said he was pleased with the apology.

“When someone makes a mistake it’s important that they own up to it and they apologize,” he said during a campaign stop in Sault Ste. Marie, Ont.