Politics Insider for March 25: When Liberals fight, what Wilson-Raybould and Philpott can say, and Morneau gets to talk about something other than SNC-Lavalin 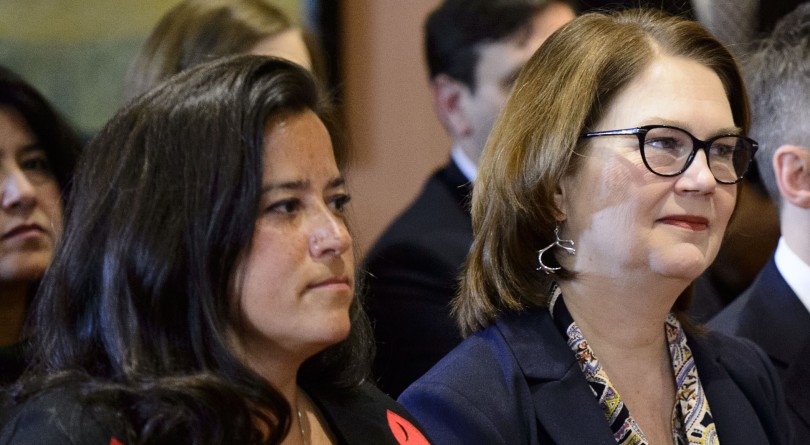 Uncivil war of words: Last week Liberal MP Judy Sgro said Jane Philpott and Jody Wilson-Raybould need to cut it out with the “innuendo” about wrongdoing on the SNC-Lavalin file. Over the weekend she amped up her rhetoric: “It’s either put up or shut up. If you’ve got something to say, you’ve had two months to get out there and say it.

Sgro had company in going after Philpott and Wilson-Raybould. Liberal ministers Karina Gould and Melanie Joly (a chromosomal trend is emerging) also hit the network circuit over the weekend to call for the two women to just speak up in the House already. (See the weekend politics round-up further down today’s newsletter for more from Sgro, Gould and Joly.)

Room to speak: Writing in Maclean’s, Philippe Lagassé, an associate professor of international affairs at Carleton University whose research focuses on the Westminster system, looks at exactly what Wilson-Raybould and Philpott can say, and where:

Wilson-Raybould and Philpott, however, are members of Parliament. As parliamentarians, they enjoy certain privileges that protect them from the executive and the courts. One of those privileges is absolute freedom of speech. When speaking as part of parliamentary proceedings, parliamentarians have the right to say anything that they feel is necessary to fulfill their duties as legislators acting in the public interest. Anything they say under this free speech privilege shields them from prosecution or lawsuits. They could still be subject to political punishments, of course, such as being thrown out of the Liberal Party caucus and the aforementioned ejection from the Privy Council. But the only body that could expel them from Parliament, fine them, or even imprison them would be the House of Commons itself, something that other members would probably hesitate to do. (Maclean’s)

The independent insider: Prime Minister Justin Trudeau‘s decision to appoint Anne McLellan‘s as a special advisor on the issue of splitting the attorney general-justice minister roles is yet another example of a government losing its optics mojo, writes Anne Kingston:

The choice of McLellan, now senior counsel at the Edmonton-based law firm Bennett Jones LLP, comes with its own optics challenges. The former law professor and politician, who served 13 years in governments headed by Jean Chrétien and Paul Martin, is respected, a staple on boards and task forces. But bringing in an active Liberal fundraiser as an “independent” adjudicator is a dissonant choice for a government that needs to distance itself from charges of partisan politics. (Maclean’s)

Starring Rachel Notley as Saint Peter: Danielle Smith, the former Wildrose leader who almost won the 2012 election, has returned to her journalism roots as radio host and sometimes columnist. In this piece, Smith states Jason Kenney is the choice of Albertans who revere former premier Ralph Klein, the populist and pugnacious deficit-slasher, while NDP’s Rachel Notley hearkens back to another iconic Tory premier—Peter Lougheed, the patrician Red Tory who invested heavily in Alberta’s culture and infrastructure, and intervened to stoke the economy. Smith here breaks from her conservative commentary brethren, who tend to simply decry Notley as socialist. “I think most Albertans have been shocked to see how pragmatic she has governed, particularly as it concerns natural resources,” Smith writes.

Notley herself repeatedly invokes Lougheed’s name, and at her campaign kickoff made a point of wearing Tory blue instead of NDP orange. Kenney talks about restoring the “Alberta advantage,” Klein’s old marketing slogan. Smith reasons that Albertans are torn as to which approach they wish to revive. “They want all the spending and Heritage Fund investment of the Lougheed era, all the low taxes and debt repayment of the Klein era. Trouble is, we can’t have both. (Calgary Herald)

In case you forgot (and a lot of people have) Finance Minister Bill Morneau delivered a budget last week, and he made appearances on all the weekend politics shows to talk it up.

On CTV’s Question Period Morneau said he’s “not ruling out” making national pharmacare—a key NDP promise—a part of the Liberals’ election platform. He also talked up the government’s new First-Time Home Buyer Incentive, yet just as the budget offered few details about how it would work, Morneau said Canadians will have to wait and see: “We still have more work to do.” (CTV News)

Still, as much as Morneau no doubt hoped to be talking about the budget and not SNC-Lavalin, the controversy still came up. Three times on Global’s West Block Morneau was asked to cite where the notion came from that 9,000 SNC-Lavalin jobs would be lost if the company didn’t get a deferred prosecution agreement, and three times he dodged. (Global News)

When Liberal MP Judy Sgro said former Liberal cabinet ministers Jody Wilson-Raybould and Jane Philpott to “put up or shut up” with their SNC-Lavalin allegations on CBC’s The House, she was asked if the pair are targeting Prime Minister Justin Trudeau: “It certainly appears to be that way.” (CBC News)

Other Liberal cabinet minister made the rounds with a similar, albeit not-as-forthright message for Wilson-Raybould and Philpott. On the West Block Democratic Institutions Minister Karina Gould urged them to “put that on the record“: “What we were hearing from many people yesterday was, if you feel that you have more to say, then say it. They both have mechanisms available to them if they chose to share this with Parliament and those are their decisions.” (Global News)

Meanwhile over on Question Period the Liberal minister for official languages, Melanie Joly, also chimed in: “They can clearly speak, they can use their own parliamentary privilege to go before Parliament and speak.” (CTV News)

Anne McLellan, the special advisor Trudeau appointed to look at splitting the attorney general and justice minister roles, says even if the two roles are held by different people, the attorney general should remain close to cabinet to stay abreast of the political context of decisions. “It’s not as if this person lives in this sealed box,” McLellan said on The House, while promising impartiality. “I am taking the emotion out of this.” (CBC News)