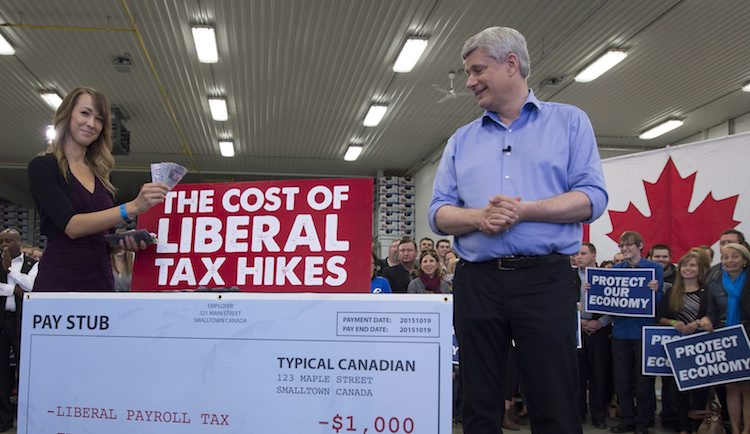 Conservative Leader Stephen Harper looks on as Nicole Ropp throws money on the counter as they illustrate how Liberal tax hikes will affect Canadians during a Conservative campaign event at an apple farm in Waterloo, Ont., Monday, Oct. 12, 2015. THE CANADIAN PRESS/Jonathan Hayward

TORONTO — With the keys to 24 Sussex Drive now thought to be within his grasp, Liberal Leader Justin Trudeau is coming under mounting pressure to spell out just how his campaign spending promises would add up.

Keen to do whatever he can to slow Trudeau’s apparent momentum, Conservative Leader Stephen Harper reiterated his warning Tuesday that a vote for the Liberals equals a vote for higher taxes.

Electing Trudeau as prime minister would spell the end of many of the tax-related benefits the Conservative government has introduced in recent years, Harper noted during a stop in the critical electoral battleground of Toronto.

“In the case of Justin Trudeau, he is making $150 billion of additional spending commitments — 25 times more than we’re making,” he said.

“The difference is this — and it’s very simple for Torontonians or everybody else — everything that we are promising is within a balanced budget that is affordable and deliverable.

“We can do it without raising taxes and without taking away a whole bunch of the other benefits that Mr. Trudeau wants to take out of people’s pockets.”

The extra scrutiny on the Liberal spending plan comes after recent polls suggested the party was inching closer to forming a government following Monday’s election.

The Liberals maintained later in the day that Harper failed to mention that their spending promises would be largely offset by new revenue.

Trudeau’s party has said it would be able to ramp up government spending and tax relief by about $146.5 billion over the next four years.

Even with that, Liberals insist they would still be in a position to produce a budgetary surplus of about $1 billion after three years of projected deficits.

To hit that 2019 surplus target, Trudeau has promised to get rid of some of Harper’s boutique tax credits and deductions as he tries to find savings of $6.5 billion over four years.

Trudeau, however, has only ever offered vague details on where that money would come from. And on Tuesday, he again avoided being pinned down on which benefits he would cancel if the Liberals prevail Oct. 19.

“There are other things that we may look at, but a full program review is something responsible that a government should do and that’s exactly what we’ll do,” he said during an event in Toronto.

Trudeau added Tuesday he would also consider axing what he called the overuse of “external, high-paid consultants” by the Harper government. On top of that, the party has pledged to examine benefits that help the wealthiest Canadians, such as certain tax loopholes.

The Liberals’ costing plan has also drawn criticism from the New Democrats, who have insisted Trudeau would have to introduce deep cuts to Canadians’ services to find the $6.5 billion needed to balance the 2019 budget.

The Conservatives say the Liberals would likely have to scrap, among other things, the child fitness credit, the children’s art credit and the volunteer firefighter tax credit.

For example, Trudeau has vowed to ditch the Conservatives’ $2-billion-per-year income-splitting plan for families with kids, a program he says disproportionately helps wealthier families.

McCallum said the Liberals would put more money in the pockets of middle- and low-income Canadians by replacing the Conservatives’ child-benefit package with their own and by hiking taxes on the biggest earners.

The Liberal government also plans to take advantage of low interest rates as a way to borrow to invest more in infrastructure. That would lead Canada to three years of deficits of under $10 billion each.

The aim, the party says, would be to jump-start the economy and create jobs all while upgrading the country’s crumbling infrastructure.

By contrast, the rival Tories and NDP have promised to balance the books rather than generate shortfalls. Both parties have repeatedly attacked the Liberal plan, which they argue would saddle future generations with more debt.

Beyond public finances, Trudeau was also tested Tuesday on other issues he would have to address as prime minister _ including how he would handle Russian President Vladimir Putin.

He fielded a journalist’s question on Putin after a report revealed that a Russian-made missile downed Malaysia Airlines Flight 17 last year in eastern Ukraine. The crash killed all 298 people aboard.

Trudeau accused Putin of “being dangerous” in eastern Europe, “irresponsible and harmful” in the Middle East and “unduly provocative” in the Arctic.

“If I have the opportunity in the coming months to meet with Vladimir Putin, I will tell him all this directly to his face because we need to ensure that Canada continues to stand strongly for peace and justice in the world.”

Should that come to pass, it wouldn’t be a first for a Canadian prime minister.

Harper himself told Putin “to get out of Ukraine” last November at the G20 summit in Australia. Putin replied with: “That’s impossible, because we are not there.”

The Liberal leader’s campaign stopped Tuesday in several Ontario ridings held by the NDP at Parliament’s dissolution _ one day after he courted red Tories in his bid to win the election.