The MP for St. John’s South-Mount Pearl checks into program to seek 'an alcohol free lifestyle' 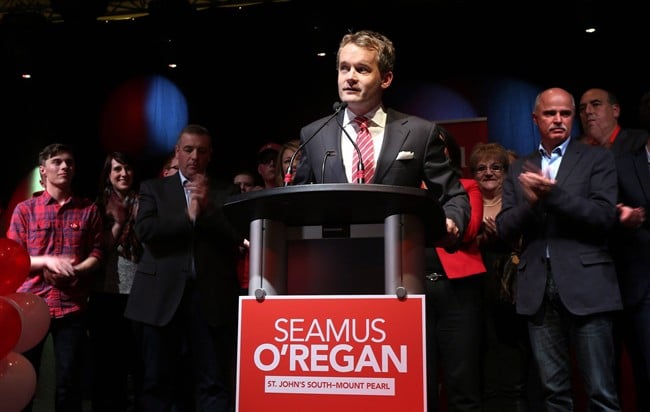 Seamus O’Regan, flanked by supporters, makes his acceptance speech at the Delta Hotel in downton St. John’s following his win in the district of St. John’s South on October 19, 2015. (Paul Daly/CP)

O’Regan, who hosted CTV’s Canada AM for nearly a decade, announced from his Twitter account on Sunday that he had checked into the program over the holiday break.

“I’ve decided after consultation with family that I can be most effective as a Member of Parliament by adopting an alcohol free lifestyle,” O’Regan tweeted. “To that end, over the holiday break, I have entered a wellness program.”

O’Regan added that he will return to his duties as a MP for St. John’s South-Mount Pearl before Parliament resumes later this month.

He also noted that he’d have “more to say” on the matter in the future, but asked for privacy until then.

O’Regan’s husband expressed his support shortly after the announcement was made online.

“So proud of my husband,” Steve Doussis said on Twitter.

A spokeswoman for Prime Minister Justin Trudeau did not comment on the matter on Sunday.

But many others expressed their encouragement for O’Regan on social media.

“VERY proud of my good friend @SeamusORegan for getting the help he needs,” tweeted Olympian and mental health advocate Clara Hughes. “I look forward to welcoming him back after treatment.”

“Hugs and strength to you,” added O’Regan’s former Canada AM co-host Beverly Thomson.

O’Regan, originally from St. John’s, was elected in October as part of the Liberals’ sweep of the Atlantic provinces.

Prior to his career in journalism, he was a senior policy adviser to then Newfoundland premier Brian Tobin.

O’Regan was also an ambassador for Bell Let’s Talk, a campaign aimed at removing the stigma of mental illness.

He has also served as executive vice-president for communications at the Stronach Group, a racetrack operator, and a media innovator in residence at Toronto’s Ryerson University.