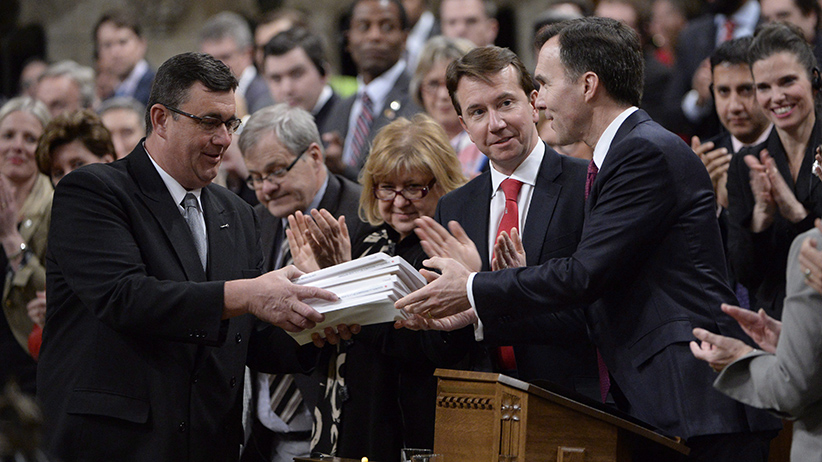 Minister of Finance Bill Morneau hands the budget to House of Commons staff prior to delivering the federal budget speech in the House of Commons on Parliament Hill in Ottawa on Tuesday, March 22, 2016. (Adrian Wyld/CP)

But that doesn’t mean no advertising will roll out eventually, nor does it mean taxpayer funds aren’t being used now to sell the big-spending Liberal blueprint.

Morneau was in New York on Wednesday as part of his budget road show and will be in Paris on Thursday — with travel costs that should be itemized and reported under any new system designed to check government self-promotion, according to “Brand Command,” an important new book on centralized government communications.

“We as a government have decided to take a much different approach in how we present ourselves more broadly and we’re going to be very careful about what we spend in all areas of advertisement and this is no exception,” Morneau said Tuesday during a budget-promoting stop in Montreal.

“We won’t be doing any paid advertising for the budget.”

Once the budget is passed in Parliament, the government may do paid promotions to inform Canadians of specific measures that affect them, such as changes to the student loans program. But rather than big-budget TV spots common under previous governments, the Liberals say they’re looking at targeted, digital campaigns.

Finance Canada has created a dedicated, budget web page, complete with a cheery animated video portraying the document’s voter-friendly highlights. The page and video are being promoted on social media by a variety of federal departments. There’s also a full-page budget ad in the New Brunswick Telegraph Journal under the name of the local Liberal MP.

Prime Minister Justin Trudeau, meanwhile, spent his second day in Alberta pitching the government’s changes to employment insurance and other budgetary measures, while other ministers are spreading the gospel elsewhere across the country.

Without a multimillion-dollar government ad campaign, establishing the Liberal brand around the new budget is clearly a priority.

Alex Marland, a political scientist at Memorial University, writes in “Brand Command,” released this month by UBC Press, that promoting a brand is critical to government communications in the fast-paced, digital news age.

The former Conservative government came under frequent fire for spending tens of millions of dollars on ads touting the benefits of its economic action plan, which was a whole-of-government branding exercise for the annual federal budget. It also used public resources to redo government web sites in Conservative blue and rebrand the government of Canada as the “Harper government.”

Other government departments and agencies, including the Canada Revenue Agency and Employment and Social Development Canada, each spent more than $6 million on blue-tinged, budget-themed advertising last year.

The Liberals campaigned last fall on a promise to appoint an advertising commissioner to help the auditor general ensure all government ads are non-partisan and “represent a legitimate public service announcement.” That promise has yet to be fulfilled.

Trudeau critics like to attack what they see as an image-driven prime minister, but Brand Command chronicles the extent to which the Stephen Harper government obsessed over image-making to establish a Conservative brand.

Marland argues Trudeau will find it very difficult to resist the systemic forces that tend to centralize governments, including the need to establish an easily identifiable brand.

But he also observes that the camera-friendly Trudeau has a leg up in the branding game.

Among Marland’s prescriptions for reforming federal communications is an annual report on “media pseudo-events,” such as photo-ops, speeches and announcements away from Parliament Hill, including travel, signage, room rentals and other expenses.

He’d also like to see all government of Canada communications in red and white only — while barring political parties (hello Liberals) from using those colours and the red Maple Leaf prominently in their design and logos.

“Above all, what must be limited is the publicity state’s contribution to the fusion of party and government brands,” Marland writes.