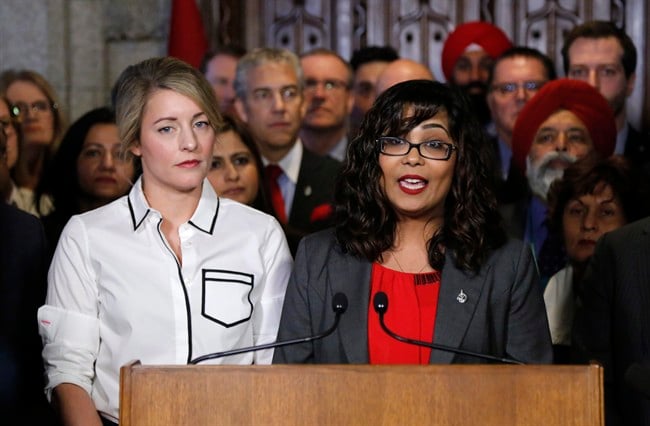 OTTAWA – Canadians will never be able to tackle hatred and discrimination against Muslims without naming the problem for what it is, says Liberal MP Iqra Khalid.

“Words have impact,” the Mississauga MP said Wednesday in the House of Commons as she opened the debate over her non-binding motion to condemn Islamophobia and all other forms of racism and religious discrimination.

“When we as a government stand together and condemn intolerance manifested through racism and religious discrimination, we can begin to tackle the issue.”

The Liberals have endorsed Khalid’s motion, which calls on the government to “recognize the need to quell the increasing public climate of hate and fear” and condemn Islamophobia, as well as all other kinds of “systemic racism and religious discrimination.”

If the motion, known as M-103, is passed, the Commons heritage committee would also be asked to study the issue and develop a strategy to tackle it.

Heritage Minister Melanie Joly said passing the non-binding motion would send a strong message about discrimination against the Muslim community, particularly in light of the recent deadly attack on a mosque in Quebec City.

“We overwhelmingly reject the politics of racism and exclusion,” Joly said outside the Commons, where she was surrounded by Liberal MPs and cabinet ministers to demonstrate that no one in the Liberal caucus would likely oppose it.

A number of Conservative MPs – including leadership hopefuls – have called for the motion to be more inclusive, warning it risks stifling freedom of expression by preventing criticism of elements of Islam or Muslim culture, such as the face-covering veil known as the niqab.

Conservative MP David Anderson called it problematic that the motion does not define Islamophobia.

“Some apply the term only to serious acts of hostility, while others apply it to every critique and every act against Islam,” Anderson said during the debate.

The Conservatives want the reference to Islamophobia dropped, but Khalid told the Commons that it’s important to describe mounting levels of racism and hate crimes against Muslims for what it is.

“I will not do so anymore than I would speak to the Holocaust and not mention that the overwhelming majority of victims were six million followers of the Jewish faith and that anti-Semitism was the root cause of the Holocaust,” she said.

“We cannot address a problem if we fail to call it by its true name.”

Trudeau did not repeat the same omission this year, but U.S. President Donald Trump did and his administration stood by the choice of words.

Conservative leadership candidate Kellie Leitch, meanwhile, tweeted a link to a petition against M-103 featuring the image of young white female _ tape over her mouth emblazoned with the name of the motion _ over a blurred background image of police officers, guns drawn, responding to the Parliament Hill shooting in October 2014.

Leitch’s office did not respond to a request for comment.

“To recognize where we currently have a blind spot, where we ‘other’ certain Canadian voices can only result in an enrichment of our multicultural, secular national conversation,” she said.

Khalid, a Muslim, said her own experience with Islamophobia over the past few weeks has convinced her to press ahead.

“Over the past few weeks, I along with some of my colleagues, have been the recipients of hateful comments,” she said. “This strengthens my resolve to continue to combat this issue.”

NDP Leader Tom Mulcair said he thinks the motion is important, but also wants to see Prime Minister Justin Trudeau and the Liberals specifically criticize U.S. President Donald Trump for the anti-Muslim nature of some of his rhetoric and policy proposals.