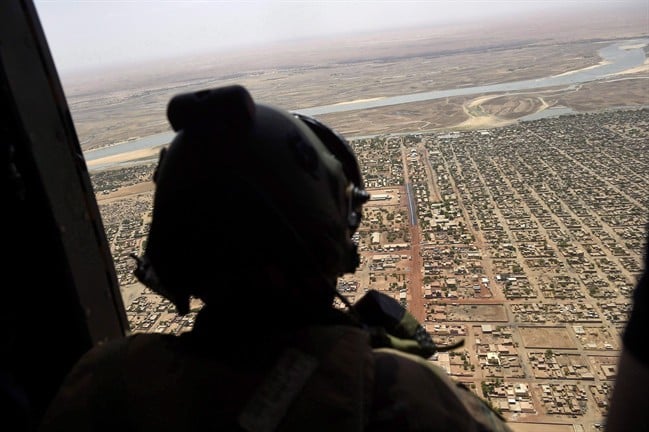 A French soldier stands inside a military helicopter during a visit by French President Emmanuel Macron to the troops of Operation Barkhane, France's largest overseas military operation, in Gao, northern Mali, Friday, May 19, 2017. THE CANADIAN PRESS/AP-Christophe Petit Tesson

OTTAWA – Foreign diplomats are frustrated about the way the Trudeau government handled this week’s announcement that Canada will send military helicopters to Mali.

The concern isn’t that Canada has committed to the peacekeeping mission; that decision has been greeted with relief-tinged applause after years of perceived footdragging by the Liberals.

Canada plans to send six helicopters to Mali for up to 12 months where they provide medical evacuations and transport to UN troops and supplies as needed.

But the diplomats feel the government failed to explain why the mission is needed — or that the Canadians will be relatively safe compared with the thousands of other peacekeepers working across the country.

Their fear is that the government has allowed incorrect information to spread, which threatens to undermine Canadian public support for what they say is a critical mission.

The diplomats say the Canadians will live with little risk of attack in a well-defended base manned by Belgian and Dutch guards and that the helicopters are urgently needed to ensure the mission’s success.

The Opposition Conservatives have demanded a debate on the mission, many details of which, including when the helicopters will be deployed and how many troops will go with them, remain up in the air.