Liberals enjoy strong support for their renegotiation of NAFTA

A new Maclean's-Pollara poll finds the gains, going into an election year, are biggest in Ontario, and seem to take USMCA off the table for Tory attacks 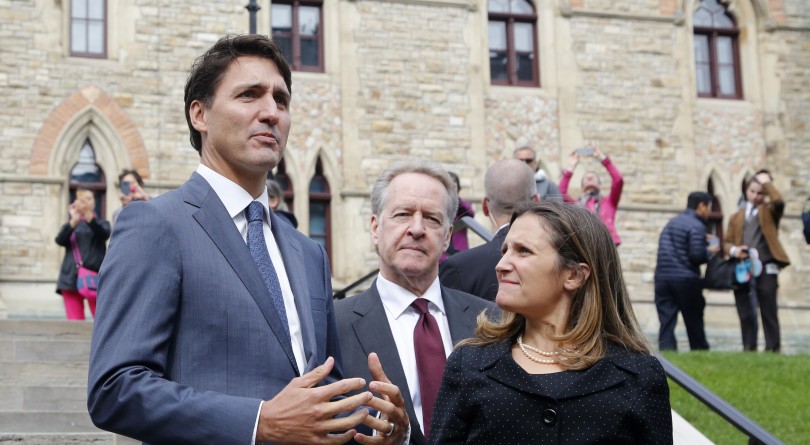 In the aftermath of the last-minute deal struck on Sept. 30 to save NAFTA—complete with Donald Trump’s insistence on rebranding the familiar old North American Free Trade Agreement as the United States Mexico Canada Agreement—Canada’s opposition parties did their best to tag USMCA as a dismal failure for Prime Minister Justin Trudeau’s Liberal government.

Conservative Leader Andrew Scheer slammed Trudeau for making concessions on everything from dairy to auto quotas to drug patent rules. “Would I have signed this deal?” Scheer tweeted. “I would have signed a better one.” NDP Leader Jagmeet Singh summed up USMCA as “new name, worse deal,” and said Trudeau shouldn’t sign until Trump lifts tariffs on Canadian steel and aluminium.

But a new Pollara Strategic Insights poll for Maclean’s finds remarkably widespread public approval for the way the Liberals handled the hard bargaining. More than half of those surveyed who have an opinion—54 per cent—liked the way the government negotiated, and the same percentage feel upbeat about the outcome. Nearly half—49 per cent of those willing to state a position—go even further, agreeing that Canada “got the best possible deal.”

From the standpoint of Scheer and Singh’s plans for painting Trudeau as a lousy economic manager heading into next fall’s federal election, these results seem to take USMCA off the table. And that has emerged as a key dividing line between Canadian and U.S. politics. “Canadians are definitely on-side with free trade agreements and other multilateral agreements,” said Pollara president Craig Worden. “Canadians seem to realize that we need to be open and outward-looking, whereas in the United States protectionism is running at possibly an all-time high.”

The online poll of 1,009 adults was conducted Oct. 19-24, or after about three weeks of jockeying for position and trying out messages regarding the deal on Parliament Hill. Pollara notes that 20-25 per cent of respondents tend to feel too unsure about an issue as technical as a trade agreement to express an opinion. Still, even leaving out those uncertain respondents, nearly half approve of the Liberal negotiating stance and the result.

And Worden pointed out that among the minority who don’t like the way the Trudeau government’s negotiated and don’t feel optimistic about the outcome, disapproval doesn’t seem to run deep.  “Even the third or so who have a negative view, they are not expressing it in a very intense way,” he said. “I don’t think it’s an intense enough view to produce a groundswell of opposition to this government.” (Canadians may also be warming to the deal over time; a separate poll conducted not long after the deal was signed found more reluctance about USMCA.)

If the opposition parties are likely to downplay USMCA in light of this decisive positive tilt in public impressions of the deal, there’s ample reason to expect the Liberals to do everything they can to play it up. Notably, in Ontario—considered a crucial electoral battleground for 2019, especially in Toronto’s suburbs—Pollara found approval for NAFTA 2.0 running at 51 per cent of those with an opinion, the highest level nationally, while the disapproving camp was only 28 per cent, the lowest of any province.

The clearest outlier to the national pattern of pro-USMCA sentiment is Quebec, where the Ontario pattern is essentially flipped, with 56 per cent of those who have a view standing against the agreement and just 24 per cent approving. Worden said that’s in keeping with a consistent pattern. “We’ve been seeing a difference coming out of Quebec in recent polls on trade,” he said. “It’s more of an insular starting point for them when they are approaching trade agreements, whether it’s interprovincial or foreign.”

Assuming Conservative and NDP election strategists are reading public opinion in a way that fits with Pollara’s findings, Scheer and Singh can be expected to try to shift the focus of attention in the 2019 economic debate away from trade. Other potential fault lines are emerging, especially after Finance Minister Bill Morneau tabled his fall economic update this week.

Morneau announced billions in new tax breaks designed to encourage businesses to make capital investments in machinery, computer equipment and other assets. But he also forecast the federal deficit at $19 billion this fiscal year, far higher than the deficit cap of $10 billion Trudeau promised in the 2015 campaign. Of course, the Liberal election promise to stop running deficits in 2019 is now far out of reach. So Scheer quickly shifted his economic message this week to vowing that a Conservative government would make balancing the books its priority.

That the Canada-U.S. trade relationship is now a Trudeau strong suit can only be seen as a clear tactical victory for the Liberals. Back in late August— when Trump was threatening to go it alone with Mexico on a trade deal that would have cut Canada out—Scheer pivoted toward attacking the Liberals for leaving Canada “on the outside looking in, while major sectors of the economy and millions of jobs hang in the balance.” By early fall, Trudeau’s point person on NAFTA, Foreign Minister Chrystia Freeland, was emerging as a favourite target for Conservatives.

Now, however, that line of attack appears pretty closed off, at least as far as public receptiveness is concerned. The potential economic clashes in the coming election year that look far more promising, from the Conservative perspective, are deficits and perhaps taxing carbon. It will be the Liberals who strive to remind Canadians that saving NAFTA was their top economic priority through much of 2017 and 2018. The question now is whether the many Canadians who approve of USMCA discount it next fall as year-old news, or keep it in mind as they go to the polls in the federal election.