Liberals to vote on open doors and a streamlined constitution 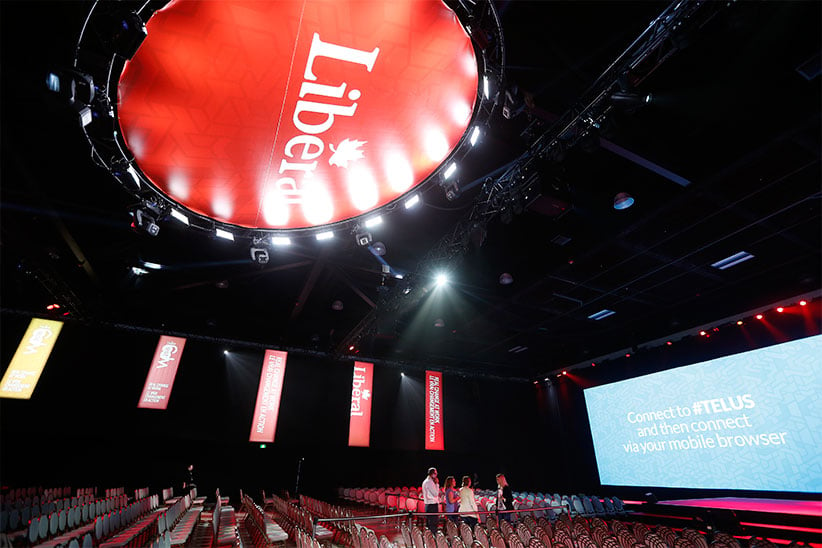 The Plenary Hall is prepared for the opening ceremonies at the 2016 Liberal Biennial Convention Winnipeg Thursday, May 26, 2016. (Photograph by John Woods)

WINNIPEG — The firmness of Justin Trudeau’s grip on the reins of the ruling party will be put to the test today as grassroots Liberals decide whether to embrace his vision for transforming the party from an exclusive club into a modern political movement.

The prime minister is the driving force behind a proposed new, streamlined constitution for the party which would, among other things, do away entirely with the concept of paid membership.

Instead, anyone willing to register for free as a Liberal would in future be entitled to vote in leadership and nomination contests, attend conventions and take part in policy development.

While the proposal is being touted as a way to throw open the doors of the party, it has raised hackles among rank and file Liberals who suspect it will actually turn the party into a different kind of exclusive club, one in which the leader and his cronies run the party as they see fit.

Delegates to the party’s first convention since last fall’s election victory are to vote on the proposed constitution today. It will require support from two-thirds of the delegates to pass.

Liberal MPs, instructed to lobby delegates from their ridings, have been pushing hard for support, as have party staffers. But the high-pressure tactics have backfired, with some delegates complaining that they feel intimidated and bullied.

That manifested itself Friday in an attempt to change the rules to allow a secret ballot vote on the proposed constitution, where delegates wouldn’t feel “pressured one way or the other,” as one Liberal put it. That idea was overwhelmingly rejected.

But even advocates of the proposal still aren’t sure it will pass, especially after a special question-and-answer session Friday on the new constitution attracted hundreds of delegates, none of them happy about it.

“It should pass but that’s a sizable group of concerned people,” Toronto MP Adam Vaughan said outside the closed-door session.

According to Liberals who attended, the main complaints were about the lack of consultation, the heavy-handed tactics used to sell it and the amount of discretion the proposed constitution would give to the leader and the party’s national board to devise bylaws governing all manner of party operations, including registration of Liberals, policy development, riding associations and the party’s provincial wings and various commissions.

Proponents contend that flexibility is needed to enable the leader and party executive to act more nimbly, rather than having to navigate through the cumbersome, detailed requirements currently spelled out in the 18 different constitutions that govern the party, its provincial wings and commissions.

“I think it’s a leap of faith,” said Brenda Kurczak, former president of the party’s Ontario wing, adding that she believes grassroots members can “have faith in the leader” and the executive to consult with them before making any major changes to party operations.

But others aren’t quite as willing to trust the party hierarchy.

Winnipeg delegate Victoria Rempel said “all of us at the grassroots level” are concerned the proposal will take power from riding associations and commissions and concentrate it in the leader and party executive.

“I think that whenever you consolidate power in such a way that it reduces power at the grassroots level, you’re very much at risk of losing touch,” she said.

While there don’t seem to be widespread objections to the concept of doing away with paid memberships, delegates are concerned that the proposed constitution includes no mention of the principles or values that would supposedly bind registered Liberals together.

Trudeau has been in Japan for the G7 summit during the first two days of the convention. But he’ll be in attendance for today’s wrap-up, giving a speech just a couple of hours before the vote on the proposed constitution.

Whether or not he makes a final plea for support, Trudeau has already invested a lot of personal capital in the proposal.

Still, Kurczak said rejection of the constitutional package should not be seen as a “slap in the face to the leader or the party executive.”

“I just think it might be the result of the feeling that this is happening too quick.”