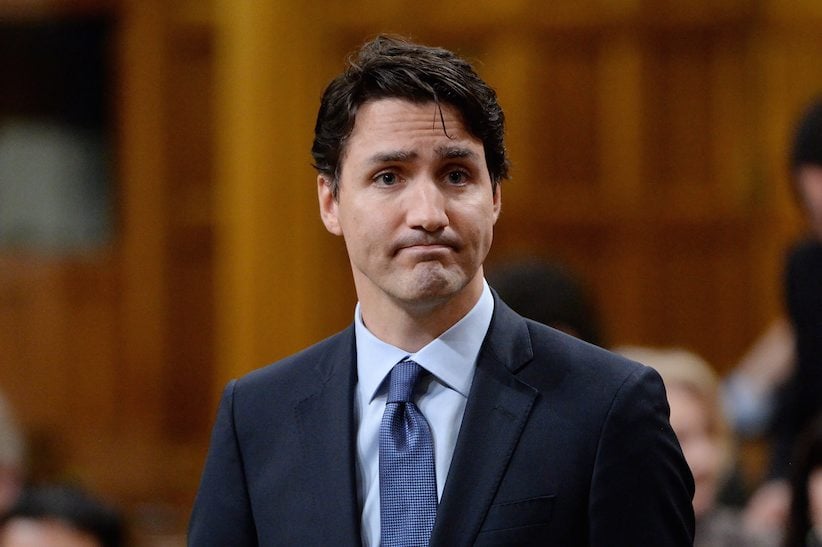 Prime Minister Justin Trudeau answers questions from opposition MPs as he addresses the House of Commons on Parliament Hill in Ottawa on Thursday, May 19, 2016. (Adrian Wyld, CP)

OTTAWA — The federal government is bowing to opposition demands and backing down on a “draconian” motion that critics say would have given the Liberals too much control over the ins and outs of parliamentary business.

Government House leader Dominic LeBlanc said during question period Thursday that the Liberals have listened to the comments of the opposition and pulled the controversial motion, known as Motion 6.

“We’ve listened to the comments made by all of our colleagues, (and) a short while ago we withdrew Motion 6 from the order paper,” LeBlanc said as cheers rained down from the opposition benches.

Related from macleans.ca: How to lose control of the House of Commons

“Our objective remains to work with everyone to find the proper mechanism to extend the sitting hours and allow for a more respectful debate on government legislation, and I look forward to working with all members of this House to achieve that objective.”

That about-face came after a contrite Prime Minister Justin Trudeau apologized yet again Thursday for a physical encounter with two opposition MPs in an unprecedented fracas on the floor of the House of Commons the night before.

But Trudeau’s political adversaries were out for more, demanding he show he is serious about decorum by withdrawing a motion that would remove procedural tools — and power — from opposition MPs.

Trudeau rose in the House to apologize to all MPs, the Speaker and also Ruth Ellen Brosseau, with whom he collided on Wednesday while trying to hurry Conservative whip Gord Brown to his seat.

“I sincerely apologize to my colleagues, to the House as a whole and to you, Mr. Speaker, for failing to live up to a higher standard of behaviour,” Trudeau told a rapt Commons as the shockwaves from Wednesday’s eyebrow-raising scene continued to reverberate.

Interim Conservative leader Rona Ambrose said she appreciated Trudeau’s apology, but insisted the Liberals need to drop the controversial motion aimed at taking away some of the procedural tools opposition MPs use to combat the government.

“He is stripping the opposition of our jobs,” Ambrose said.

“We have a job to do in the House, and we take it seriously. If he truly respects the role of Opposition, and the role of every member of the House, then he has to withdraw the motion,” Ambrose said.

Trudeau did not give in, side-stepping the demand in his response to Ambrose.

“It is important that we draw a clear line between what was my unacceptable behaviour and the general tone of the House,” he said. “The escalation and the tone of the House does not lead to any justification of my actions, and I accept that fully.”

If the Liberals get their way, a day in the House of Commons would not end _ and the summer break would not begin _ until a cabinet minister or parliamentary secretary moves to adjourn proceedings.

The motion would also make it harder for the opposition to surprise the government like they did on Monday, when the Liberals had to scramble to their seats for a snap vote on proposed changes to Air Canada legislation.

Liberal Andrew Leslie, the chief government whip, did not say one way or the other whether the motion would stay. Other government sources said discussions were ongoing.

The demands to withdraw the motion dominated the debate over a question of privilege that persisted all morning in the Commons.

Conservative MP Candice Bergen said that if Trudeau wants to restore his credibility, he needs to withdraw the motion, because an apology only goes so far. “It’s a first step of a lot of other steps that have to take place.”

Treasury Board President Scott Brison, however, echoed Trudeau when he said it would be a “mistake” to conflate the incident with the motion.

“To conflate the two, in my view, is to diminish the importance of what the prime minister has done today, and that is to accept responsibility and to apologize,” Brison said.

Trudeau was subdued as he rose in the House of Commons to apologize for pulling Conservative whip Gord Brown through a clutch of New Democrat MPs in an effort to hurry up a vote related to doctor-assisted dying.

Footage from the Commons television feed showed Trudeau trying to pull Brown through the crowd. In so doing, he appeared to collide with Quebec MP Ruth Ellen Brosseau, who reacted with visible discomfort as Trudeau pushed past her, forcing her against an adjacent desk.

“That intervention was not appropriate, it was not my role and it should not have happened,” Trudeau said Thursday.

“It is important because we are here to serve Canadians, and Canadians deserve to have their concerns expressed fully and fairly in a direct and dignified manner. I know, and I regret that my behaviour yesterday failed to meet this standard.”

NDP MP Tracey Ramsey told the Commons in the immediate aftermath of the incident that Trudeau uttered a profanity as he approached her caucus colleagues standing in front of Brown.

“He said, ‘Get the bleep out of the way,”’ Ramsey said in the House. An NDP source who spoke to Ramsey afterwards confirmed the MP had heard Trudeau say “get the f— out of my way.”

Brosseau said she was shocked by the encounter.

“I was standing in the centre talking to some colleagues,” Brosseau told the House after calm was restored. “I was elbowed in the chest by the prime minister and then I had to leave.